LTFRB to Uber: No one is above the law

Aug 14, 2015 12:13 PM PHT
Rappler.com
Facebook Twitter Copy URL
Copied
In a viral Facebook post, an automotive journalist alleges that LTFRB and DOTC are 'starting their own service called Premium Taxi, which is just another racket and another inept way of reinventing the wheel' 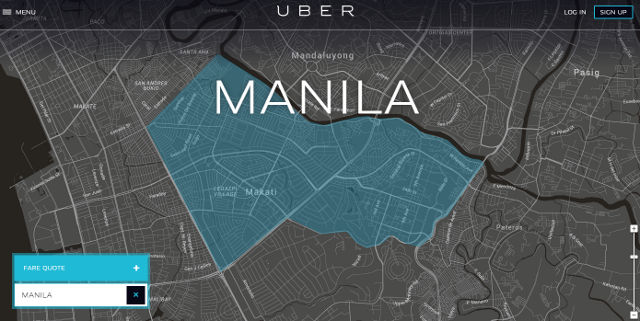 MANILA, Philippines – On Thursday, August 13, automotive journalist James Deakin alleged that the Land Transportation Franchising and Regulatory Board (LTFRB) and the Department of Transportation and Communications (DOTC) are being “so unreasonably hard on Uber.” Deakin suggested that the agencies are introducing a new mode of transportation that would compete with ride-sharing service providers like Uber and GrabTaxi.

In a Facebook post making the rounds online, Deakin said LTFRB and DOTC “are starting their own service called premium taxi, which is just another racket and another inept way of reinventing the wheel!”

And now the truth comes out. No wonder the LTFRB and DOTC are so unreasonably hard on Uber. They are starting their own…

On May 8, 2015, the Department of Transportation and Communications ((DOTC) Issued Department Order No. 2015-11 creating new modes of transportation vehicles such as Bus Rapid Transit (BRT), Airport Bus, Transport Network Vehicle Service (e.g., Uber and GrabCar) and Premium Taxi. The purpose of said policy issuance is to improve mobility of our people and provide high quality transportation services to our commuting public.

Pursuant to the DO, LTFRB held on July 24, 2015 a consultation among PUV operators, primarily taxi operators, regarding its draft Memorandum Circular to implement the roll out of Premium Taxi. The Notice of Public Consultation and the operating conditions for a Premium Taxi was published in major newspaper of general circulation, posted in LTFRB website and LTFRB Citizen Enforcer account in Facebook.

The allegation that Premium Taxi was created to compete with Uber and GrabCar is without basis in fact and in law. Premium taxis are of higher end since only sedans with engine displacement of 2.0 or higher will be accepted. No SUVs, AUVs and vans will be accepted. Thus, the cars that are acceptable are Toyota Altis 2.0, Toyota Camry, Benz, and the like. Notably, our neighbor Asean cities such as Jakarta and Kuala Lumpur and Singapore have Premium Taxis many years ago. It is high time that we offer the same kind of high quality and modern taxis to our people.

Other operating conditions of Premium Taxi include: (1) a qualified operator is required to have minimum of 25 units each to ensure that only financially capable operators will be granted franchise; (2) they have taxi meters; (3) they have top lights identifying them as Premium Taxis; and (4) they can pick and drop passengers through street hail unlike Uber and GrabCar that can only be booked through online application. The goal of rolling out Premium Taxi is to provide alternative taxi transport to more discerning and higher end taxi passengers who are willing and ready to pay higher fare for better service. The target clientele of Premium Taxi are domestic and international tourists, professionals, millennials, and the like.

The application for Premium Taxi under the draft MC will be open and transparent as it will undergo three stages: pre-qualification (legal, technical and financial), selection and application for franchise.

DOTC and LTFRB, in apprehending UNREGISTERED Uber and GrabCar vehicles, DO NOT and WILL NOT put Uber or GrabCar out of business. We just want them to apply for and be granted with franchise by complying with the Dept Order and MCs that were issued three (3) months ago.

It is worthy to mention that after DOTC and LTFRB issued the governing rules for Uber and GrabCar to operate legally in the Philippines, Uber hailed the Philippines as a tech-forward country. 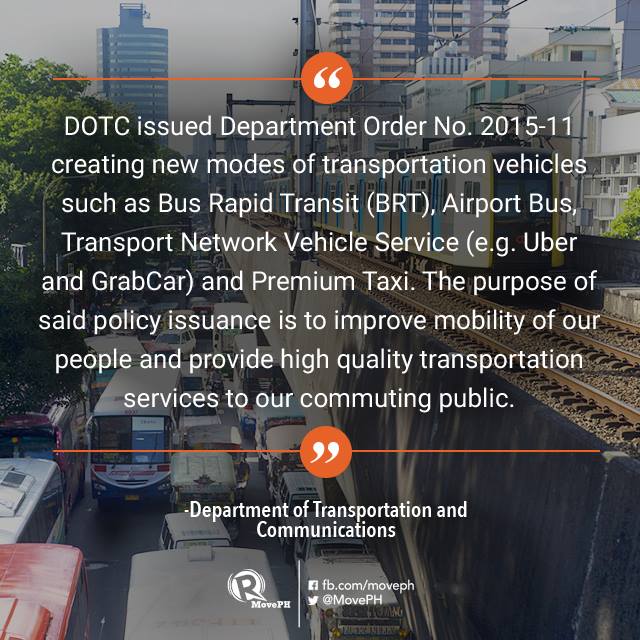 While in other countries Uber is either fighting government regulators or its drivers being apprehended and fined heavily by police authorities, the Philippines, through DOTC and LTFRB, was the first country in the world to issue comprehensive regulations to make its operations compliant with our public service laws. This was despite the lobbying of taxi operators for DOTC and LTFRB not to allow the operations of Uber and GrabCar in the Philippines.

Yet, despite that the Philippine regulations became effective on May 30, 2015 or more than two (2) months ago, Uber has not yet applied for accreditation. Its partner vehicles continue to ply our streets and engage in public land transportation without the requisite franchise. Though DOTC officials reached out to Uber officials urging them to comply with the registration regulations, Uber just kept on promising that it will file its application. Thus, in fulfillment of our sworn duty to implement our public land transportation law, DOTC and LTFRB gave Uber and its partner vehicles and the partner vehicles of GrabCar (which is LTFRB accredited already) until August 20 to apply for and be granted a franchise.

To paraphrase former Mayor Fred Lim, the law should apply to all or to no one at all. Simply put, no one is above the law.

Operators of Uber, and competitor GrabCar will be apprehended starting Friday, August 21, if they are unable to secure the necessary franchise or provisional authority from the LTFRB.

This paved the way for the DOTC and LTFRB to create new transport categories, legalizing the new public utility vehicle (PUV) players.

Uber is a ride-sharing service where users can take advantage of an app to request rides, as well as track where their reserved vehicle is coming from. Users of the service pay using their credit cards, with the rate calculated by a measure of distance and time spent on the road. – Rappler.com