Where is money to fight poverty going? MANILA, Philippines – Residents of Barangay Laurente pride themselves as hardworkers. Limited opportunities in their small coastal village, however, are pushing them further down the poverty trap.

For many years, the far-flung barangay in Masbate has suffered the consequences of a lack of good roads and pathways.

Despite abundant natural resources, fishing failed to help families improve their lives as traveling to markets proved to be difficult. Those needing to access basic health and education services had to walk at least an hour-and-a-half, rain or shine.

In 2014, a health center and a concrete pathway were constructed, easing the lives of residents.

Change happened in Laurente because they themselves identified and implemented solutions through one of the Department of Social Welfare and Development’s (DSWD) social protection programs: The Kapit Bisig Laban sa Kahirapan Comprehensive and Integrated Delivery of Social Services-National Community-Driven Development (KC-NCDDP).

Launched in early 2014, this nationwide development program uses a community-level approach which enables poor communities to survey their area and deal with problems they are experiencing themselves. They do this by drawing up their own project proposals. (READ: Community-level approach: Answer to PH poverty?)

This way, they become more involved and engaged at the community level, resulting in more inclusive local planning, budgeting, and implementation.

Based on data from the DSWD uploaded on the government’s Open Data Website, there are 5,723 KC-NCDDP projects implemented in 49 provinces across the Philippines as of April 2015.

A bulk of the projects are located in Leyte province with 573. Seven out of the 10 provinces with the most number of projects were among those affected by Typhoon Yolanda in November 2013.

These were prioritized in the first wave of KC-NCDDP projects in early 2014. This community-level approach in the Typhoon Yolanda-affected provinces sought to boost rehabilitation efforts.

This is also evident in the list of regions that shows Region VIII (of which Leyte is a part) having the most number of projects.

The provinces with the most number of KC-NCDDP projects are also listed in the priority areas identified by the administration of President Benigno Aquino III based on data from DSWD, PSA, and the Department of Science and Technology.

Six out of the 10 provinces are also the areas identified to have the most number of beneficiaries of the Pantawid Pamilyang Pilipino Program (4Ps), DSWD’s other poverty-alleviation program. This program provides cash grants to families with a pregnant member or with children up to 18 years old – provided they follow conditions set by the agency. (READ: Where in the PH are the Pantawid beneficiaries?)

For an area to be eligible for KC-NCDDP, it should be: 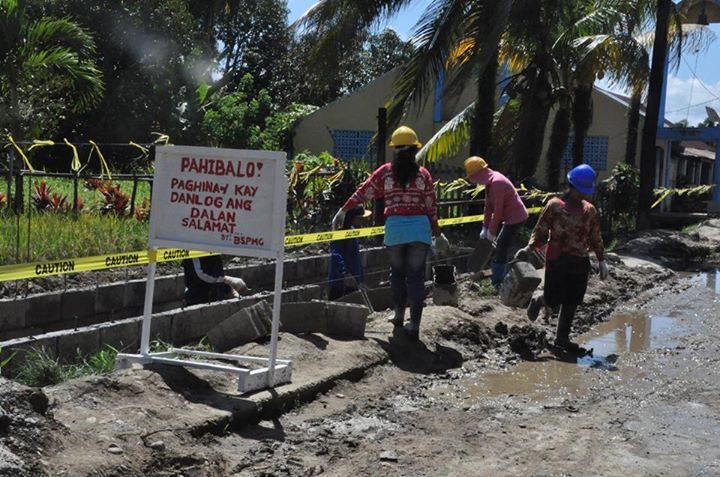 Communities are free to identify projects that can lift their current status and answer their needs, according to DSWD. These projects, however, should fall under 5 categories: Basic services sub-projects, basic access infrastructures, community common services facilities, environmental protection conservation, and skills training and capability-building.

The April 2015 data of DSWD’s KC-NCDDP show most projects fall under the basic services sub-projects category with 2,808 projects. Under this category are 994 school buildings, 550 day care centers, and 487 health stations, among other projects.

Basic access infrastructure comes in second with 1,879 projects – including but not limited to 593 road rehabilitation/improvements, 590 footpaths, and 406 road concreting.

The total budget of KC-NCDDP – which will be implemented until 2019 and will cover 847 municipalities – amounts to P43.9 billion ($940 million)* from the World Bank, Asian Development Bank, and the national government.

Projects under basic services and basic access infrastructure also got the bulk of the allocated budget with at least P3 billion ($64 million) and P2.9 billion ($62 million), respectively.

Community-based poverty reduction efforts have been constantly heralded as an effective way to attain inclusive growth, especially in developing countries.

Welfare Secretary Corazon Juliano-Soliman believes that involving the poorest sector in the development process is a move intended to make sure “no one is left behind.”

KC-NCDDP’s predecessor, Kalahi-CIDSS, which only covered select municipalities, was said to be effective in engaging and raising the participation of community residents in identifying and addressing problems and priorities in their areas. The World Bank report added that it has helped communities suffering from poverty.

With almost two years since its national expansion and with positive anecdotes from beneficiaries, will KC-NCDDP finally achieve inclusive growth in the Philippines? – Rappler.com

What do you think of the government’s poverty alleviation programs? Do they work? Let us know in the comments!

Pushing for sustainable communities and ending poverty are part of the 17 Global Goals and are important issues #PHVote 2016 aspirants should tackle! How can the Philippines achieve this by 2030? Join the conversation at Rappler’s Innovation +Social Good! Register here.