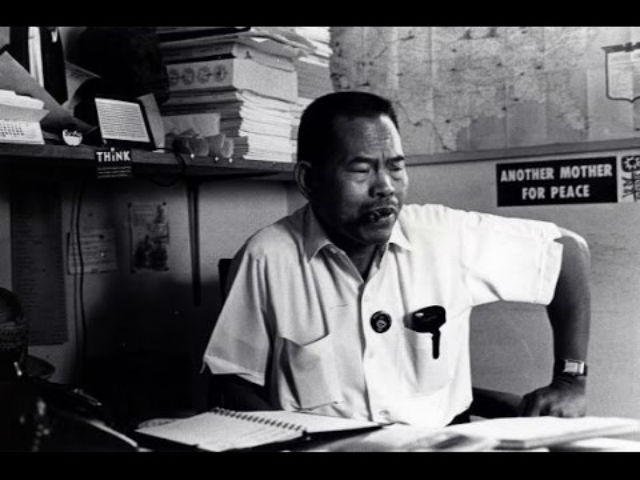 CALIFORNIA, USA – Half a century ago, leaders of Filipino farm workers agreed to escalate their clamor for better wages and working conditions by walking out of their jobsites and sparked what would be the Delano Grape Strike of 1965.

Larry Itliong and Philip Vera Cruz on September 7, 1965, voted to strike and on September 8 led their Agricultural Workers Organizing Committee in reaching out and locking arms with their Latino counterparts under Cesar Chavez – the National Farm Workers Association – to launch the California farm labor movement.

That act was historic for multiple reasons.

The collaboration defied growers’ divide-and-rule philosophy and stirred a groundswell of support throughout and beyond the central valley of the Golden State. Faith groups, civil rights activists, students and politicians, notably US Senator Robert F. Kennedy, joined the upsurge of protesters and brought national attention to the cause.

Inspired by Gandhi, the peaceful movement headlined a 300-mile march from Delano to Sacramento that highlighted the abject plight of the farm workers. The movement spurred a boycott on table grapes until 1970 when the table grape growers signed the first union contracts and brought social justice to the heart of western farm country.

Public records and even Hollywood hail Chavez as the hero of the successful movement, all but ignoring the contributions of the actual strike masterminds.

Filipino Americans are correcting the omission.

In 1992, Craig Scharlin and Lilia Villanueva published Philip Vera Cruz: A Personal History of Filipino Immigrants and the Farmworkers Movement. They had met the icon 20 years before as volunteers building Agbayani Village retirement housing for farm workers.

Last year, director-writer Marisa Aroy debuted The Delano Manongs, her valentine to the “forgotten heroes” of the strike.

Early this week California Assembly Member Rob Bonta (D -18th) stood on the floor of the Assembly and heralded the civil action and its leaders.

“AWOC successfully invited the mostly Latino farm workers union, the National Farm Workers Association, to join the strike – ushering in one of the most significant events and collaborations in California history, launching the California farm labor movement, and leading to the creation of the now world-renowned United Farm Workers of America, and ending decisively, growers’ historical attempts to pit them against each other,” Bonta said, paying tribute.

While honoring the collective leadership of the movement, Quezon City-born Bonta – the first and still the only Filipino American elected to the California State Legislature – has made it his responsibility to give due credit to his forebears.

Next month, California will mark Larry Itliong Day, the result of AB7 or the Bonta Bill to establish a state day of recognition for the farm labor organizer.

The Filipinos walked out on September 8, 1965, and the Latinos joined them on September 16, Mexican Independence Day.

Bonta had a ringside view of the strike, toddling along with his parents Cynthia Arnaldo and Warren Bonta, religious education students advocating for unionization.

In 1993, Cynthia Bonta hosted Itliong’s comrade Vera Cruz and his wife Deborah in her home to receive the Lifetime Achievement Award at the Filipino Fiesta in Sacramento, which Cynthia Bonta organized.

“With the enactment of AB 7 and AB 123, the contributions of Filipino Americans to the farm labor movement will become a more commonly known part of California’s rich and vibrant collective history,” Bonta said of the milestones.

“A central piece to that story is the pivotal role Filipinos played in sparking the Delano Grape Strike of 1965. Larry Itliong played a critical role in that transformative evening 50 years ago. And his subsequent collaboration with Latino leaders, including Cesar Chavez and Dolores Huerta, demonstrated his visionary leadership in understanding the importance of uniting behind shared goals and refusing to be divided.”

The strike and boycott are deeply imprinted in Assembly Member Bonta. One of his first acts was to introduce AB 123 requiring schools to accurately account for the Filipino American contributions to California’s farm labor movement.

“Since 1975 a group of activists and I had wanted to make changes to the inaccuracies, distortions and omissions in social studies textbooks in the way they have treated the mention of Filipinos and the Philippines – and finally someone from our children’s generation succeeded in making the first of the many changes that yet needed to be made,” Cynthia Bonta shared with author in an earlier interview.

“I knew it would be emotional for the son of Larry Itliong, Johnny, who has been crusading to give his father the honor that he so deserves, whom Rob asked to meet with, not the other way around.”

On September 5, Bonta returned to Delano and bonded with Johnny Itliong at the doorway of the Filipino Community Hall, for a golden anniversary reunion.

“It is my hope that all of us working together in this house will be informed by the brave vote those individuals took 50 years ago,” Bonta reiterated two days later at the Assembly.

“The unprecedented collaboration that was forged during the Delano strike of groups that had been historically divided was critical to its success and it is that commitment to collaboration and progressive change that is essential to our ongoing pursuit of racial, social, and economic justice for all.”

Bonta’s district covers Oakland, Alameda and San Leandro. He chairs the Assembly Health Committee and the Select Committee on the Status of Boys and Men of Color in California. – Rappler.com