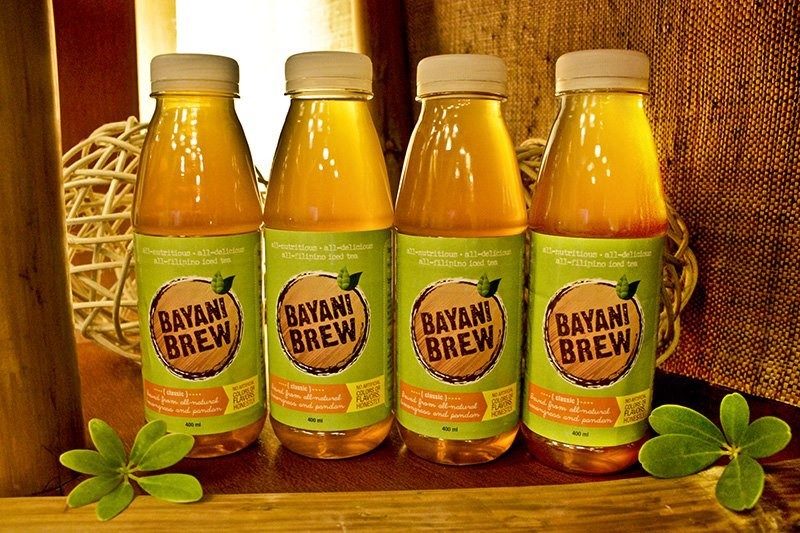 MANILA, Philippines – A small bundle of talbos ng kamote (sweet potato leaves) can be bought from any market for about P5 to P10 ($.10 to $.20)* but only less than half of the income goes to the rural communities who grow them.

Middle men and transportation costs cut back the profit that could otherwise help the farming families already suffering from low wages. After all, according to the Philippine Statistics Authority, the agricultural sector is the poorest in the country.

Bayani Brew seeks to change this thinking. A Gawad Kalinga social enterprise, Bayani Brew helps communities make the most out of what they have to get out of the poverty trap.

Highlighting innovative solutions to persistent problems, social entrepreneurship plays a vital role in bottom-up change – a much needed action in a country with high poverty incidence despite alleged economic growth.

According to Unlad Kabayan, a migrants’ social enterprise, social entrepreneurs are able to “recognize the problems in the community and then identify resources that can help address the problem.”

Bayani Brew is an “all-nutritious, all-delicious, all-Filipino beverage” that comes in several flavors such as classic and purple leaf.

Despite being an “iced-tea drinking” nation, the Philippines has to import tea leaves from neighboring countries. However, in small communities, residents make use of local leaves.

According to Ron Dizon, one of the founders, Bayani Brew traces its beginning to the nanays (mothers) in the GK communities in Angat, Bulacan who usually serve hot teas to volunteers and visitors.

“We saw the opportunity that they were able to come up with quality brews from the ingredients they could get from the farm,” he told Rappler. “We can brew up and make them more accessible.”

From one Bulacan farm in 2012, with the help of the Department of Agrarian Reform, the group now sources leaves from 4 farming communities, including Tarlac. However, getting the trust of these communities wasn’t easy.

“They were skeptical at first,” Xilca Alvarez said. “Parang para sa kanila, sino ba itong bata na ito na nagpapaasa na bibili ng maraming talbos ng kamote at tanglad (For them, who’s this kid who is trying to lead us to hope that they’ll be buying a lot of camote tops and lemongrass from us?)”

The doubt and fear did not pop out of nowhere. The community, Alvarez recalled, just emerged from a messy deal with a business which left them with almost nothing but a year full of cassavas.

(It was really difficult to get their trust because they had grown tired of big businesses who make them farm. One time, their whole community planted so much cassava at the request of a certain business and they had to eat cassavas for the whole year because the company never came back after 6 months.) It didn’t help that Bayani Brew then was completely unknown and that camote tops aren’t exactly sought-after crops. After a few months – and higher market value pay – the farmers eventually trusted them.

“What we really did is that we gave them to the market as they didn’t have any market,” Angeles said. “They’re used to planting same low-value crops at ang alam lang nila ay ibebenta nila sa middle man at ibebenta nila ito sa Balintawak (what they only know is that they’ll sell to a middle man who will sell the crops in Balintawak.)”

Bayani Brew boasts of selling organic ingredients, but the farming communities they worked with weren’t at all into organic farming.

The group provided capacity-building workshops for the farmers and their families to learn how to plant organic crops. From using only chemical fertilizers, they now make use of what’s around.

But it doesn’t there, Dizon said, as one of the goals of the social enterprise is to make agripreneurs out of the farmers – to make progress more steady and sustainable.

“We really want to transform the farmers to be agripreneurs,” he explained. “We want them to treat farming as a business.”

“By choosing exclusively local ingredients, we were able to provide a steady income for the farmers,” he added.

Social enterprises play a big role in ending poverty in the Philippines. However, the so-called “digital divide” hinders these businesses from reaching maximum potential.

In a report Unleashing Entrepreneurship, the United Nations Development Programme (UNDP) identified lack of physical and social infrastructure, uneven playing field, and lack of access to skill development and knowledge as some challenges that social entrepreneurs might face.

If left unsolved, these challenges may eventually lead to the failure of social enterprises.

During Rappler’s Innovation +Social Good: Social Good Summit 2015 on Saturday, September 26, Globe Telecom’s head for corporate social responsibility Bong Esguerra highlighted their engagement with social entrepreneurs who are on a “social mission” to help improve their capacity to serve communities. (READ: Telcos: Farmers, fishermen, entrepreneurs should not be left out)

Bayani Brew was able to benefit from Globe’s technology. With operations “thinly spread” in North Luzon, they had a hard time looking after production – sometimes resulting in losses.

Through technology, they were able to properly monitor and increase their productive value. The communities Bayani Brew helps also benefited.

“Those things, they seem very simple and trivial to other businesses,” Dizon said. “But for the people in the communities, it’s the first time they’re using it lalo na Internet at ang laking tulong at ease ang nadala ng Internet sa buhay nila (it’s the first time they’re using these innovations, especially the Internet, and it’s brought a lot of help and ease to their lives).”

Technology, Esguerra emphasized, is important for social enterprises to achieve sustainability. This paves the way for a constant source of income for communities that the social entrepreneurs support.  (READ: Silicon Valley Filipino technopreneur to SMEs: Master digital tech)

“We’ve helped social enterprises achieve sustainability to ensure the livelihood of the sectors they were designed to support,” he said. “And how? Through the technology that we’ve provided them.”

Social enterprises thus should supported – both by the public and the government – as it is key to “inclusive growth” the Philippines longs for.

“It’s very much linked to making inclusive growth a reality,” Dizon emphasized. “If we want to improve, I think social enterprises will play a big role in influencing economic growth and other businesses to be more mindful of inclusive growth.” – Rappler.com

To know more about Bayani Brew and its cause to help farming communities, visit their Facebook page.