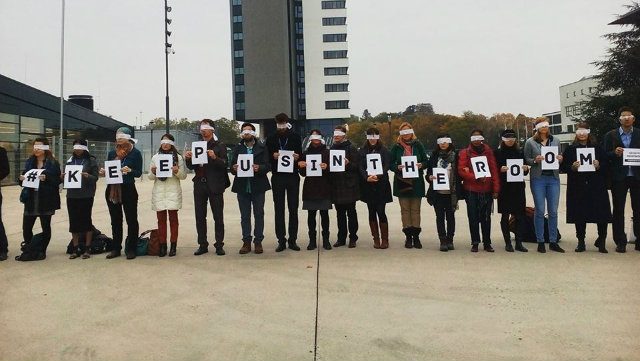 Facebook Twitter Copy URL
Copied
Civil society organizations are locked out from the climate negotiations on, with only negotiators and delegates allowed inside the conference center

The CSOs were locked out from the climate negotiations on Tuesday, October 20, with only negotiators and delegates allowed inside the conference center.

Negotiating blocks such as the G77, Alliance of Small Island States (AOSIS), the Africa group, and the Like Minded Developing Countries have called the original text “lopsided,” “imbalanced,” and only serves the interests of rich countries like the United States. The decision to keep civil society out of the negotiations was supported by Japan, saying that “real negotiations never happen in front of the public.” The United States and the European Union (EU) also supported the move. Meanwhile, developing countries were disappointed with the closed-door negotiations.

“Observers have invested great deal of time, money, and intellect. On what basis do we exclude them?,” said Malaysia.

Accredited CSOs are usually allowed inside negotiations where they can observe the process and listen to the negotiators as they speak. This process allows for transparency of the negotiations, said CSOs.

“This is integral since climate change involves the whole world and not just diplomats. It concerns humanity at large. Why aren’t observers allowed in spin-offs? We don’t need to be afraid of civil society. We are accountable to them,” Malaysia added.

G77 and China also requested for the spin-off groups to be open to observers. Spin-off groups are parallel meetings tackling specific parts of the negotiating text.

As the third day of negotiations begin with civil society still not allowed inside, the issue was brought to social media with a protest petition called #KeepUsInTheRoom.

“Our presence signals an atmosphere of openness and willingness to stand up to public scrutiny.  Blocking us shows the opposite.” said Gita Parihar of the CSO Friends of the Earth International.

“We are disappointed. There is historical reminder that the UN have been created on the basis that transparency is needed to achieve a democratic world. Secret negotiations is harmful for democracy,” stressed Anabella Rosemberg of the International Trade Union Confederation.

“This is a slap in the face for us who believe UN is a place where fair deals can be achieved,” she added.

Noelene Nabulivou of the Women and Gender Constituency said, “I am from Fiji and in the frontlines of climate change. It’s absolutely imperative that I would like to have access as much as I can in the negotiations.”

Renee Juliene Karunungan is the Communications Director and climate campaigner of Dakila. Dakila is an organization that has been working on climate justice since 2009. She is also a climate tracker for Adopt A Negotiator.