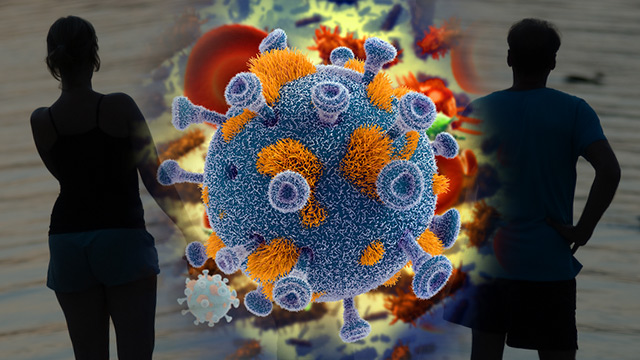 MANILA, Philippines – The number of Filipinos diagnosed with the human immunodeficiency virus (HIV) is on the rise and may reach around 133,000 by 2022 without the proper intervention, the Department of Health (DOH) said on Wednesday, November 25.

From January to October 2015, there were a total of 6,552 individuals diagnosed with the virus. The number is 37 times higher than the 174 people diagnosed with HIV in 2001, the DOH said in a statement.

“If we do not slow down our HIV epidemic, if we do not invest in preventing new HIV infections, the number of PLHIV will reach 133,000 by 2022,” the DOH said.

This, despite the government’s efforts to curb the HIV epidemic to achieve the Millennium Development Goal (MDGs) “to combat HIV/AIDS, malaria, and other diseases.” (WATCH: Rappler Talk: Curbing the HIV epidemic in PH)

The DOH also revealed its study that the country’s MDG indicator on “correct and comprehensive knowledge on HIV prevention and transmission” remains low for key populations.

The Philippines set a target of 80% of key populations but the study showed that less than 40% of males and transgenders having sex with males (MTSM), female sex workers, and people who inject drugs (PWID) have comprehensive knowledge on the disease.

According to the DOH, MTSMs in the Philippines can be considered a “concentrated epidemic” under the United Nations. HIV among MTSMs increased 10 times in the past 5 years, breaching the 5% UN threshold for this group.

Those in the 15-24 years age group in the population also showed an 800% increase in HIV prevalence.

DOH set its target for condom use among males having sex with males (MSMs) at 80%, but the country only reached 44%. (READ: On preventing HIV/AIDS: Are you afraid of condoms?)

“We should not  expect to see a decline in new infections among MSMs until we increase condom use and sustain it at a high rate,” said Health Secretary Janette Loreto-Garin.

One of the reasons cited for low condom use, according to the 2015 Integrated HIV Behavioral and Serologic Surveillance (IHBSS), is unavailability (54%) and rejection of condom use during sexual activity (21%). (READ: #StayNegatHIVe: We need to talk about HIV/AIDS)

The department said it is already identifying areas to best distribute the condoms and lubricants it procured. The DOH is also planning to intensify its peer education programs to promote condom usage.

Under the new Sustainable Development Goals (SDGs), WHO and UNAIDS have set new global targets for HIV by 2020:

The Philippines is far behind the target.

Garin added that if not curbed, HIV cases would continue to increase and would cost the Philippine Health Insurance Corporation (PhilHealth) P4 billion ($85 million) a year for the outpatient HIV package.

“We need to strengthen our partnership with other government agencies such as the Department of Education, as well as community-based organizations in order to reach the young key population with correct information,” Garin said – Rappler.com

HIV/AIDS is a problem in many communities – both rural and urban – across the Philippines. Responding to our communities’ concern about the issue, Rappler’s MovePH is launching a campaign to promote awareness on the issue. Follow our stories through the hashtags #StayNegatHIVe#LivePositive