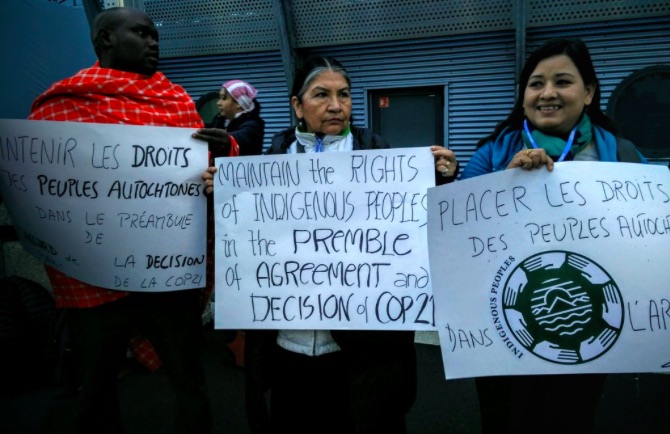 PARIS, France – What could be more ironic than to observe “Human Rights Day” with references to human rights being dropped from a crucial article of the climate deal that seeks to save humanity from disasters?

Joan Carling, an Igorota (Kankanaey tribe) from the Philippines who is leading the indigenous delegation from Asia, was celebrating their day at the Green Zone in Le Bourget, venue of the Paris climate conference, when the recent draft text of the deal was released on Wednesday, December 9. (READ: Asia indigenous peoples day at #COP21 in Paris)

The draft agreement was a huge spoiler, according to indigenous peoples, activists, and other summit observers here.

With bracketed references to human rights, and the particular rights of indigenous peoples, migrants, children, persons with disabilities, and people in vulnerable situations and under occupation, the deal is poised to drop the contentious issues, they fear.

The document is also still uncertain on whether to limit global warming to below 2ºC, or below the more ambitious 1.5ºC cap. (WATCH: #COP21: Not ready for 1.5-degree-Celsius cap?)

Never before have the stakes of the international conference been so high for indigenous peoples and other vulnerable sectors, noted Carling, secretary general of the Asia Indigenous Peoples Pact (AIPP).

“We are at the frontlines of climate change. We have the lowest carbon footprint and we are protecting Mother Earth because of our sustainable lifestyle and culture, but we are the ones being affected by the impacts of climate change,” Carling stressed.

Indigenous peoples, who own, occupy or manage about 65% the world’s land surface, “have been largely excluded” from national climate change mitigation and adaptation plans, according to the UN Development Programme (UNDP).

There are at least 370 million indigenous peoples in 90 countries, comprising 5% of the global population and 15% of the world’s poor, the UN Permanent Forum on Indigenous Issues reported. 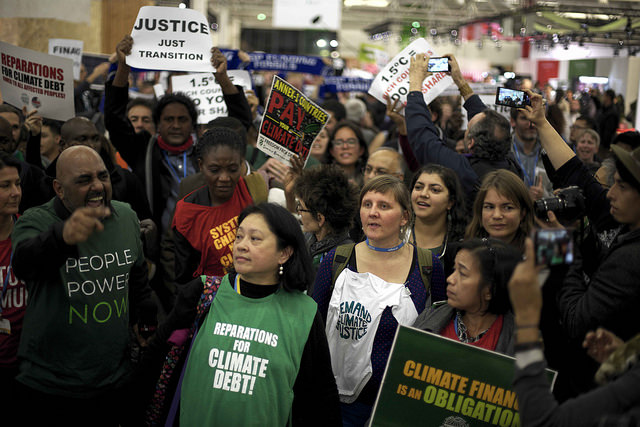 About 400 global advocates also raised their stake and expressd dismay over the recent outcome of the talks that are expected to wrap up on Friday, December 11.

“The delivery of adequate mitigation for keeping us below 1.5 degrees will also not be meaningful unless there is finance that is delivered,” Lidy Nacpil, coordinator of Aksyon Klima Pilipinas network member Asian Peoples Movement on Debt and Development (APMDD), said.

Developed countries like the US and the European Union contested liability and compensation for loss and damage brought about by the adverse effects of climate change, the group claimed.

“Paris will produce an outcome that serves the 1%, and leave behind the 99% of this planet. We don’t just want an agreement, we need a just agreement,” said Ibon International’s Tetet Lauron.

She chanted with other activists in the Blue Zone in Le Bourget, venue of the COP21.

“People are gonna rise like the water. we’re gonna calm this crisis down. We hear the voice of the great granddaughter, saying climate justice now.”

Corpuz earlier debunked the contention of countries opposing the language on rights in the operational portion of the climate agreement.

“We urge delegations to please do the right thing here in Paris,” Craig Mokhiber of the Office of the High Commissioner for Human Rights said in a press conference.

Human Rights Day started in Paris in 1948 when the UN General Assembly adopted the Universal Declaration of Human Rights (UDHR) at the Palais de Chaillot.

“It’s only appropriate that as the member states of the United Nations convene here to agree on a climate agreement that they remember that they came in to this hall with a commitment to international human rights,” Mokhiber said, adding that they should not “undercut those human rights in this agreement.” – Rappler.com