Jan 31, 2012 1:10 AM PHT
Natashya Gutierrez
Facebook Twitter Copy URL
Copied
The youth should take a stab at a dream they might never have known they had 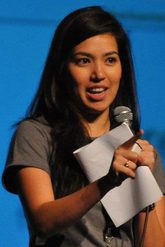 MANILA, Philippines – My life changed when I was 12 years old.

I didn’t know it then, but I know it now. Clearly, and without a doubt.

I was an awkward, lanky adolescent who did as I was told, performed well in school, and spent my free time swimming competitively in an attempt to rid myself of my debilitating asthma. But a group of people dressed in crisp suits and high heels saw something in little, simple, sickly me. Something beyond the green pants I loved to wear and the braces I didn’t like as much.

And they picked me.

When I was 12 years old, I got a scholarship to the International School of Manila (ISM).

It was a 7-year academic scholarship, a full-ride from 6th grade through 12th grade.

My mother, more than anyone else, was the one who forced me to apply for the scholarship. She convinced me to take the test — “just to try” — I recall her saying. And so I did. Then I was called in for an interview. They wanted to get to know me, to meet the girl behind the test score, and for whatever reason, they liked me. They liked me enough.

I hated moving to a new school. Being the new girl in middle school was an unpleasant experience and I learned quickly that kids can be nasty.

I came from an all-girls Catholic school and didn’t know how to deal with boys and their hormones. And well, I wasn’t really one of them.

My classmates came from all around the globe — Africa, the Americas, Australia — and they spoke unfamiliar words dripping with heavy accents unknown to my Filipino self who thought that Forbes and Polo Club were brands, not places.

I vividly remember the horror I felt when my seatmate asked me who in the world the Virgin Mary was.

But the discontent didn’t last for long. I fell in love with ISM quickly and the love affair spans all 7 years I spent there. It was easy to get used to having only 14 others in my class, not 41.

My teachers encouraged us to speak up. It was difficult to decide which extra-curricular I would pursue because there were so many to choose from. I flew to Singapore, Malaysia, Indonesia, Thailand for swimming competitions — and later, to play soccer and touch rugby. I became a high school athlete.

I pursued theater. I was a sports reporter for my high school’s first-ever news station that students built entirely on their own with the support and resources given by the administration. I read James Joyce, Gabriel Garcia Marquez, Albert Camus for class. I learned French.

And when I was finally a senior, I was pushed by my mentors and teachers to pursue a college degree abroad.

Not a single cent

Yale was an unbelievable, indescribable experience. I learned from the best. In between my years there, I spent a summer in Paris mastering the French language, and in Kentucky and Accra, Ghana to intern in multinational companies. I never spent a single cent.

Like ISM, my parents would never have been able to afford an Ivy-League education. But Yale financed all 4 years of my time in college, including my travels in between, and has armed me with — more than an education — skills that will help me for the rest of my life: critical thinking, analysis, time management.

I worked for Rappler after graduating from college.

I would never have made it there, here, if not for the years I spent in ISM.

My drive to discover and explore was something I now realize came from my time inside the walls of that school building in Taguig. I spent my crucial, developmental years in an environment that lauded diversity, encouraged learning, and instilled independence.

ISM taught me to take pride in being Filipino, to celebrate my culture and nationality amidst an international setting — a lesson I carried with me all throughout my years away, a lesson that ultimately brought me back home.

I write this in the hopes of inspiring other young, simple adolescents who are what I was 13 years ago. I wish for them to take a stab at a dream they might never have known they had.

Applications for the ISM scholarship — and quite literally the doors to unimaginable opportunities — are now open. – Rappler.com

Writer’s Note: Some rules for the ISM scholarship have changed. It now welcomes incoming 7th graders or 1st-year students. ISM now offers partial scholarships instead of full scholarships. As for the benefits, they are the same, if not better. Apply here.