Jan 29, 2016 4:49 PM PHT
Rappler.com
Facebook Twitter Copy URL
Copied
Those for and against LED lights are concerned about road safety 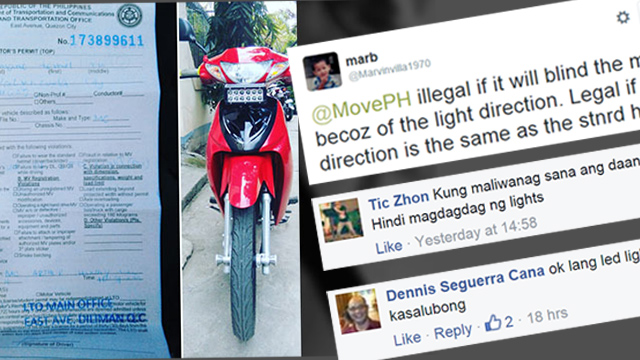 MANILA, Philippines – After the Land Transportation Office (LTO) announced a ban on light-emitting diode (LED) and other vehicular modifications, netizens took to social media to share their thoughts on the policy.

The general sentiment? A resounding “no” to the rules.

The mood meter for the story reporting the motorcycle riders’ reaction to the LED ban showed 92% were angry and only 8% said they were happy.

Motorcycle riders, in particular, were outspoken in their rejection of the ban. Many of them felt their concerns were not taken into consideration, and the removal of LED fixtures would bring them more harm on the road.

Jonard Mercado had stronger sentiments on the ban: “LTO is depriving all riders with their safety. LED lights is clearer that the stock bulb which will give all riders a better view while driving at night and in rainy weather.”

However, he also qualified the opinion he left on MovePH’s post, saying “some riders don’t know how to use it properly.”

Their main worry was that the lights allowed them to drive at night and on poorly-lit areas. Without the LED parts, riders would not see bumps and potholes as clearly.

Logan Howlett said drivers would not need brighter lights if they were driving safely. “You drive at a speed limit that is safe. So if your visibility is reduced, you drive slower. Not rocket science. You don’t haul ass in a heavy rain do you?” he wrote.

The LTO memo “reiterates” the prohibition of “unauthorized wang-wangs (noisemakers or sirens), LED lights, and all other modifications.”

One of the complaints against using LED lights was that they were blinding for other motorists.

Although Nicco Valen saw the point behind LED lights, he also said “there were also some complaints regarding the improper use of these lights which tend to blind drivers of oncoming vehicles.”

Article IV, Section 34 (c) of the Land Transportation and Traffic Code states: “the driver must dim the headlights or tilt the beams downward whenever the vehicle is being operated on well-lighted streets within the limits of cities, municipalities, and thickly populated barrios or districts, or whenever such vehicle meets another vehicle on any public highway.”

Others, however, proposed compromises. One was for drivers to dim their lights to avoid blinding other motorists. For Dennis Seguerra Cana, “ok lang LED lights basta marunong mag dim pag may kasalubong.”

(LED lights are okay as long as drivers know how to dim their lights when there is oncoming traffic.)

Those in support of LED lights said they were willing to let go of their LED lights as long as  the government also provided better lighting for the streets.

“Kung maliwanag sana ang daan at walang lubak, Ok lang na kahit Hindi magdagdag ng lights,” said Tic Zhon. (If the streets were brighter and there were no potholes, I would be okay without adding lights.)

What do you think of the LTO policy on LED lights? Tell us on X! – Bea Orante/Rappler.com