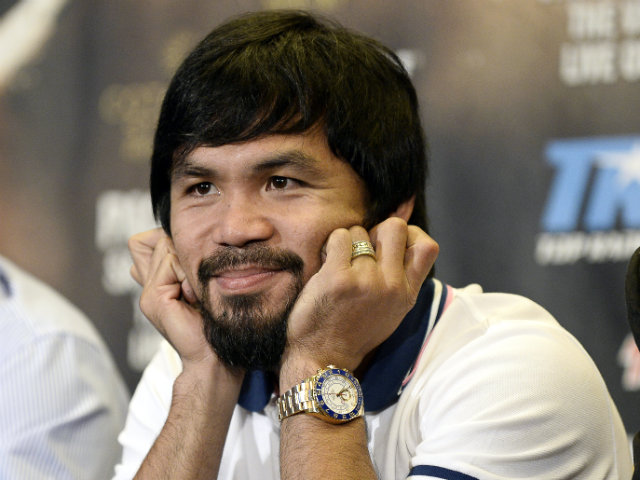 MANILA, Philippines (UPDATED) – Boxing icon and two-term congressman Manny Pacquiao has made known his view on same-sex unions, and he is not a fan.

Pacquiao, who is running for one of 12 seats up for grabs in the Philippine Senate on May 9, described couples in same-sex marriage as “mas masahol pa sa hayop (worse than animals)” in a viral video interview by Bilang Pilipino.

Pointing to the mating habit of animals, the boxing champ said it was “common sense” for animals to pair with the opposite sex. Based on this, he concluded that those in same-sex unions are worse than animals.

“Why LGBTs and progressives should not vote for this animal,” Myke Sotero, a Metropolitan Community Church (MCC) Denomination pastor, commented on Facebook, where the video interview was shared more than 23,000 times and viewed over a million times as of posting.

Celebrity blogger Perez Hilton also weighed in on the controversial remark, calling it a “barbaric” view: “Look, if your religious beliefs prevent you from accepting same-sex marriage, that’s on you. That’s your idea of propriety. But there’s absolutely no call to demonize and denigrate gay people by comparing them to animals just because their love is something you’re unable to accept.”

In the House of Representatives, Pacquiao, a born again Christian, is known for his conservative leanings. He was one of the vocal opponents of the Reproductive Health Law and strongly argued against its passage.

In 2012, the National Conservative Examiner published an article by Granville Ampong, wherein Pacquiao said, “God only expects man and woman to be together and to be legally married.”

Pacquiao was in Manila for the official start of the campaign season, but is now back in General Santos City to train for his third fight with Timothy Bradley Jr.

Several senatorial candidates of the Partido Galing at Puso of Senators Grace Poe and Francis Escudero took a swipe at Pacquiao for his negative comments against the LGBT community.

Kapunan added it is important to discuss the beneficial legal consequences of same sex living together before starting debates on same sex marriage.

“I think he is misguided. I cannot agree at all. Completely disagree,” he said.

“Dapat di na dagdagan discrimantion sas LGBT sector by comparing them to animals. The perfect quote is it’s below the belt,” he said.

Migrant workers advocate Susan “Toots” Ople added dignity should be affored to all including the gay community.

“Yung sa akin lang we should afford dignity for all and I feel na siguro he needs more enlightenment and more reflection. I’m sure with the guidance of the LGBT community, that can take place,” Ople said.

At least 3 other senatorial candidates have already discussed same-sex marriage as an issue in the 2016 elections. (READ: Colmenares, Kapunan, Romualdez praised for stand on divorce, same-sex marriage)

Kapunan, Colmenares, and Leyte Representative Martin Romualdez said they were open to start debates and discussions to make same-sex unions a matter of public policy.

Colmenares authored House Bill 1842 or the Anti-Discrimination Act of 2013, which seeks to eliminate all forms of discrimination on the basis of sexual orientation and gender identity.

In the races for president and vice president, Liberal Party standard-bearer Manuel “Mar” Roxas II stated same-sex unions should not be a matter of public policy, but his running mate, Camarines Sur Representative Leni Robredo, held the opposite view.

Another presidential candidate, Davao City Mayor Rodrigo Duterte, publicly expressed his support for same-sex unions. However, gender advocates have slammed him for using “bayot” (gay) to describe his critics who questioned his promise to end crime in just 6 months if elected president.

As gender issues become a major issue in the lead-up to the 2016 polls, many members of the LGBT community assert that candidates should tackle their concerns during the campaign.

What are your thoughts about Pacquiao’s comments regarding same-sex marriage? Write them on X. – Rappler.com