The streets that haunt Filipino women

Mar 8, 2016 10:22 AM PHT
Fritzie Rodriguez
Facebook Twitter Copy URL
Copied
In Quezon City alone, 3 in 5 women are sexually harassed at least once in their lifetime as of February 2016. What counts as sexual harassment in the streets and how do you take action?

MANILA, Philippines – How safe are Philippine streets for women?

The streets bear witness to many of the country’s daily horrors: heavy traffic, street families begging for food, vehicular accidents, theft among other crimes, and violence.

An example of such violence is sexual harassment, as experienced by Filipino women.

Sexual harassment in public spaces: “Unwanted comments, gestures, and actions forced on a stranger in a public place without their consent and is directed at them because of their actual or perceived sex, gender, gender expression, or sexual orientation.” – Stop Street Harassment Organization

In Quezon City alone, 3 in 5 women were sexually harassed at least once in their lifetime, the Social Weather Stations (SWS) reported on Monday, March 7.

The Philippines, of course, is not alone. Street harassment remains a problem among several cities worldwide.

To solve the issue, the United Nations Women launched the “Safe Cities Global Initiative,” a flagship program aiming to eliminate sexual violence and harassment against women and girls in urban public spaces.

The initiative covers 25 cities globally. In the Philippines, the program is piloted in Quezon City. With a population of over 3 million, Quezon City is Metro Manila’s most populous city. It also has one of the biggest urban poor populations and informal settler families, according to UN Women.

As a start, Quezon City Mayor Herbert Bautista is pushing for additional streetlights and more well-lighted streets across the city. He is also calling for more “women cubicles” in public schools. 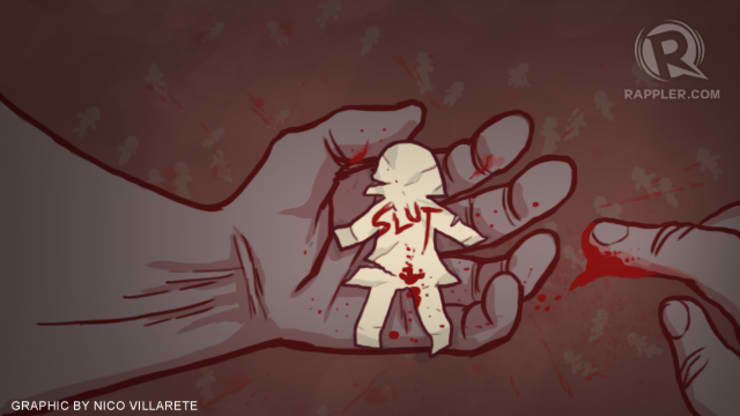 In February 2016, SWS surveyed women and men in barangays Payatas and Bagong Silangan in Quezon City regarding sexual harassment in public spaces.

The results are appaling.

“Although both women and men have a general sense of safety in their barangays, men feel safer than women,” the survey revealed.

Meanwhile, 58% of respondents ages 12 to 24 said they were “not sure” if Quezon City is safe or not.

Across all ages, 12 to 55 and above, wolf whistling and catcalling are the most experienced cases.

Other forms of sexual harassment include:

Such abuses can happen on the streets, in and around public transportation, schools and workplaces, public washrooms, and other public spaces.

In the Philippines, 58% of such incidents happen on the streets, major roads, and eskinitas. Physical forms of sexual harassment occur mostly in public transport.

Other reported areas are the church, internet shops, parks, stores and malls, school grounds, and terminals and waiting sheds.

In fact, 1 in 7 of the surveyed women experienced sexual harassment at least once every week in the past year.

Who are the perpetrators?

Seventy percent of women said they were sexually harassed by a “complete stranger.” Other culprits include “someone they see around the neighborhood,” acquaintances, and “someone they are close to.”

Contrary to what most people might think, majority of sexual harassment incidents happen in broad daylight. Seventy percent of cases happen during the day, between 6 am and 6 pm.

Only 4% of cases were reported to occur at night.

Aside from women, the lesbian, gay, bisexual, and transgender (LGBT) community is also vulnerable.

“In fact, the Safe Cities program works with the non-governmental organization GALANG to train LGBTs on how to deal with sexual harassment in public spaces.

Quezon City police officers, judges, and prosecutors are also trained on how to be more gender-sensitive in addressing sexual harassment reports.

Aside from women, the survey also interviewed male respondents and found that 3 out of 5 men confessed to committing a form of sexual harassment at least once in their lifetime.

In summary, 1 in 7 men commit sexual harassment at least daily in the past year.

“Men commit sexual harassment regardless of their educational background or employment status,” the SWS reported.

Although all barangays and police stations are required to have a fully-operating Violence Against Women and Children (VAWC) desk, not all survivors come forward.

In the survey, 1 in 2 women admitted that they “did nothing” after being harassed.

The survey found the following reasons as to why some women remain silent:

Victim blaming also surfaced as one of the problems experienced by women.

“More women than men think that it is the woman’s fault why she gets harassed and that there are women who deserve to be harassed,” the SWS observed.

Sadly, 27% of women “strongly or somewhat” believe that women are to blame.

This is where education comes in, for both women and men.

The Philippines is lauded by governments abroad for having several pro-women laws. Advocates, however, point out that not all laws bear teeth.

Aside from the country’s laws on rape, the Magna Carta of Women, and VAWC, the Philippines has the Anti-Sexual Harassment Act of 1995 or Republic Act 7877.

The law declares all forms of sexual harassment in the “employment, education or training environment” as unlawful. The UN Women, however, argued that street harassment is not well-discussed in the Philippines.

In March, the Quezon City local government amended its Gender and Development Code, increasing the penalties against violators.

Meanwhile, severe violations (physical sexual harassment) set higher sanctions, with an imprisonment lasting from 1 month to 1 year and a fine of P3,000 to P5,000.

“There is a lack of legislative framework, that’s why we partnered with the QC government,” said Belen.

“We aim to promote general public awareness. The message is for women, men, and bystanders. A lot of bystanders don’t do anything,” added Belen.

“They lack awareness or are afraid or feel that nothing will be done by authorities anyway.”

In the future, UN Women wants to train other local governments in its fight for safer cities. – Rappler.com

Quezon City residents can report cases of sexual harassment to 436-7211. You may also join the conversation online using #FreeFromFear.

Nationwide, police stations and barangays have protection desks for women and children. Survivors may also seek counseling and other forms of assistance from their nearest police station and local social welfare and development office.