Men of the ring

MANILA, Philippines – The air is thick with testosterone, sweat and adrenalin. Mojo Gym is alive with activity. The loud “paaakkk paaak thuuuud” of punches can be heard from the outside.

In the boxing ring, Andy Baleña “Coach Andy” is training a man thrice his size. He instructs a fair-skinned client, “Jab straight! Straight! Four punches!” No more than 2 rounds pass and already his client is feeling winded. His shirt is drenched in sweat, his face is red, and he is gasping for breath.

The bell rings and he takes a 30-second break. In the same ring, Richard Gestopa “Coach Richard” instructs a 5-year-old boy boxing for the first time. “Hook left, hook right,” he instructs the boy.

The kid is all smiles as he appears to be enjoying the moment. Outside the ring, Geofrey Gonzales “Coach Geof” is training the boy’s mother, a fair-skinned woman with striking red hair. He instructs her how to throw the proper punch, demonstrating the moves while doing so. This is their routine.

Coach Andy was a former member of the Philippine Boxing Team in the late-80s. He first started boxing at the age of 12 when most kids were still running around playing sipa, patintero and taguan.

He trained to be a boxer. A neighbor encouraged him to try the sport and he loved it. He and 4 of his siblings eventually made it to the Philippine Team. The training was rigorous, requiring them to wake up at dawn to run until their legs felt like rubber and their lungs felt like fire.

After the strenuous exercise he was off to the gym to do weights, core exercises, heavy bag training, and relentless sparring. It would’ve been a warrior-like life had it not been for an incident that injured Coach Andy’s shoulder.

It forced him to give up boxing and instead take up a series of odd jobs that likewise required stamina and a lot of lifting – in publishing houses, a couple of huge bookstores, and in raucous concerts. Until he found the boxing gym. 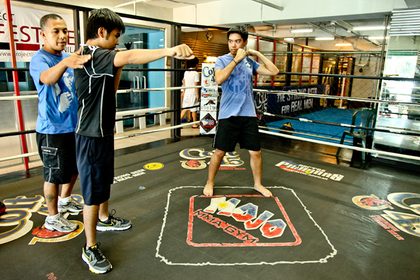 Of the 3 trainers, it is Coach Geof who knew he was destined to be a boxer. “I  wanted to give honor to the country but before I could do that, I had to pass through the eye of a needle,” he says in Filipino.

He was 19 then – training against his parent’s wishes at first, but eventually making it to the Philippine Team in the early-90s. After 4 years of fighting, he gave up boxing because he was aware that boxing is not forever. “Tumatanda din tayo pagkatapos ng boxing. Iniisip ko muna kung paano kumita.”  (We age after boxing. I was thinking first of how to earn a living.)

He drove a tricycle for a living, becoming slightly better off when he became a jeepney driver and then eventually a family driver. During that time, he contemplated getting back in shape, getting back in the ring to fight again.

His trainee paces in the ring, sweats profusely, smiles and is proud that she lasted all of 8 rounds.

Years back, somewhere in Quezon City, Coach Richard was fixated on a boxing match, thoroughly studying the boxer’s moves and aping them. Despite his lack of formal training in boxing, a friend who happened to be a member of the Quezon City boxing team noticed his potential, and encouraged him to join the inter-barangay boxing match.

It was then that he decided to take boxing seriously, training relentlessly until he got recruited by the Philippine team. One of the coaches spotted him at the National Open and saw raw potential.

He trained with the Philippine Team for 10 years, after which, he served in the Philippine Army, moving from unit to unit. When his contract ended, he took a year off just to hibernate. During that time, he longed for the ring, the fights, the adrenalin. And he found it in the boxing gym.

It was in 2002 when the 3 former boxers got together and found themselves back in the ring, this time training not themselves, but others who want to be physically fit.