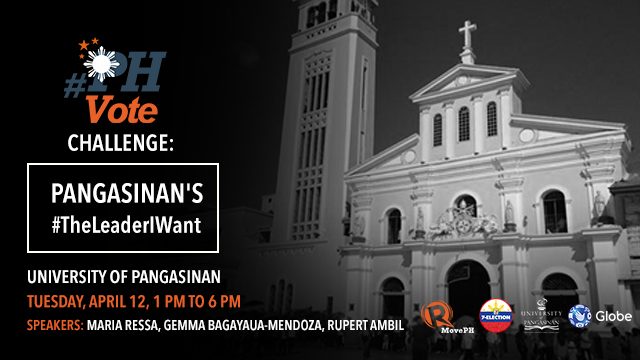 MANILA, Philippines – Who will win the votes of the Pangasinenses?

In the 2013 midterm elections, 1.34 million or 81% of the total 1.65 million registered voters in Pangasinan appeared at voting precincts to cast their ballots. The provincial voter turnout was higher than the national average of 77%.

Ahead of the 3rd presidential debate organized by the Commission on Elections, to be held in Dagupan City, Pangasinan, candidates take turns visiting the province.

In the 2010 vice presidential elections, Jejomar Binay lost to Manuel Roxas II in Pangasinan. Roxas got 517,563 votes while Binay only received 441,055 votes. Binay won the national count, however.

But this does not automatically mean sure votes for the Roxas, who is now the Liberal Party’s standard-bearer. (READ: LP walks tightrope in vote-rich Pangasinan after NPC breakup)

Mid-February this year, Binay visited Pangasinan and promised that he would be a “spending executive.” During the campaign rally in Pangasinan, the spokesperson of his United Natiolist Alliance, Mon Ilagan, said their camp is “concerned” about winning the Pangasinan vote, but noted that the situation in 2016 is different from 2010. Pangasinan gubernatorial candidate and former congressman Mark Conjuangco earlier expressed his full support for Vice President Binay.

Meanwhile, Davao City Mayor Rodrigo Duterte brought his campaign to the north and received rock star treatment when he visited the province in early March. In the past Pulse Asia surveys, the tough-talking mayor from the south lagged behind his rivals in Luzon (excluding Metro Manila).

Pangasinan can also be considered a bailiwick of Senator Grace Poe, despite not having too many local politicians backing her up. It is the home province of her late father, actor Fernando Poe Jr. In the 2013 senatorial elections, Poe garnered 818,598 votes in the province.

Of all the presidential bets, only Miriam Santiago has not visited the vote-rich province, although she and her running mate Senator Ferdinand Marcos Jr launched their campaign in the neighboring province of Ilocos Norte. Despite this, the Youth for Miriam network has a chapter in Pangasinan, in addition to 19 others, said group spokesperson Edrian Villanueva.

In May 2015, Rappler launched #PHVote: The Leader I Want, its online campaign for its 2016 elections coverage.

To arm the Filipino youth with as much insight and issues concerning the upcomings elections, Rappler and its civic engagement arm, MovePH, held #PHVote forums across the Philippines in 2015: Davao, Cebu, and Cagayan de Oro.

We started 2016 in Laguna, Eastern Visayas, Iloilo, and Baguio. Our next destination is Dagupan City!

#PHVote Challenge: Pangasinan’s #TheLeaderIWant will be held from 1 pm to 5 pm on Tuesday, April 12, at the University of Pangasinan.

The forum will highlight important local issues in Pangasinan.

Interested to attend the forum? Register via Eventbrite below.

We also invite participants to sign up in the #PHVote challenge upon registration for a chance to win amazing prizes! – Raisa Serafica/Rappler.com