MANILA, Philippines – The Vinzons Hall is considered the freest building in UP Diliman, home of the historically militant Philippine Collegian and the University Student Council (USC). Not even the Marcos dictatorship could effectively conquer it.

On Feb 1, 1971, the academic community set up a massive barricade that lasted for more than a week to block government forces. The community declared itself the “Diliman Republic.”

But on the same day, 41 years after, a robber snaked through the premises of student freedom and attacked an activist, Lordei Hina, a USC volunteer.

This prompted university officials to take immediate steps to quell fears about campus safety and security. On Thursday night, February 2, UP Diliman Chancellor Cesar Saloma and Vice Chancellor for Student Affairs Marion Tan emerged from a long meeting of the Campus Safety and Welfare Committee to announce the measures they were taking.

Addressing the public, particularly the parents of students and future students of UP, Saloma assured them, university officials “are working hard to improve our security system to ensure the safety and welfare not only of students, but also of the faculty and employees.”

Saloma said the committee, which is in charge of campus security arrangements, agreed to increase the visibility of the UP Diliman Police and improve its professionalism.

The campus police is civilian in character and is not part of the Quezon City Police District, though it has made arrangements with the local police unit.

People entering buildings will also be asked to show their IDs, and metal detectors will be put in place.

Tan said they will be “conducting discussions in dormitories and different colleges to explain what happened, explain the additional security measure that will be instituted and encourage vigilance of students.”

“We want additional safety measures to be owned by the community,” she added.

“What we wanted to develop is to increase deterrence to discourage operation of criminal elements,” Saloma said.

Saloma explained that when he assumed office in March 2011, he “inherited a security system that needed to be improved.” He said that a better security system was put in place that is why the suspect in the recent attack was immediately captured.

The suspect, “Carlo Pecayo Santos” (not his real name according to the police), is now detained at the Quirino Police Station 9 and is facing robbery and frustrated homicide charges. The other suspect remains at large. 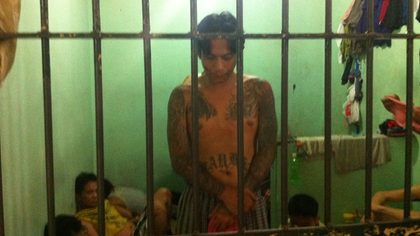 University officials, however, cautiously clarified that the measures will not curtail freedom of movement in the campus, which is known to be the “University of the People.”

“It is sad and alarming because it happened in Vinzon’s Hall. This is the student center which has made itself very open not only to UP students but also to students from different universities because this is the image we would like to create, not only in Vinzons Hall but the entire UP,” Tan said.

Saloma said the challenge for the committee is to “strike a balance between openness to the public and achieving security and welfare of students, teachers and visitors.”

Recognizing that the academic community is traditionally wary of strict security measures, Saloma stressed that students, unions, teachers, police and employees will be constantly involved in designing the campus security plan.

“The issue of campus security is a community issue,” Saloma said.

Blaming poor security in the campus, Connie Hina, mother of the victim called for stricter measures.

Meanwhile, USC councilor Amancio Melad III said that while the council condemns the attack, it would assert that Vinzon’s Hall needs to continue to be the bastion of freedom of expression.

The USC is expected to discuss the incident and look into the measures the administration has taken during its general assembly on Saturday, February 4.

But the student leader blamed the decrease in the number of security personnel implemented in January this year on the university’s cost-cutting measures. “This is already an effect of the budget cut,” Melad said.

Saloma said the reduction in the number of security guards was due to the high cost of the contracts with previous security agencies that escalated to as much as P89-M.

Hina said, “Many social ills can be linked to what happened to my daughter but at this point I don’t want to dwell on that.”

“I just want my daughter to fulfill her dreams,” Hina said, calling upon the public to pray for the speedy recovery of her daughter.

The graduating Political Science student who was attacked by robbers Wednesday, February 1, at Vinzons Hall in UP Diliman is now in critical condition at the surgical intensive care unit of the Capitol Medical Center in Quezon City. – Rappler.com