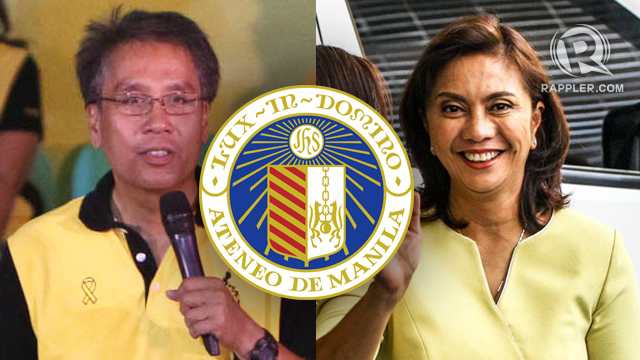 According to the Ateneo Task Force, a total of 2,351 students, staff, and employees participated in the mock polls. The group noted, however, that “the number of actual voters does not constitute a representative sample of all eligible voters in the university.”

Two voting stations were set up inside each campus. Each of the stations had 3 to 6 laptops for the voters. They filled out Google Forms with the general question: “If the national elections were held today, who would you vote for in the following positions – president, vice president, senatorial candidates?”

The Ateneo poll participants chose the following next to Roxas:

More than 6%, or 154 voters, did not choose a presidential candidate.

For vice president, Ateneo voters chose the following after Robredo:

In the latest Social Weather Stations survey, Marcos is the front runner, while Robredo is tied for the second spot Escudero.

When it came to the senatorial elections, Richard Gordon was the top choice among Ateneans. He was followed by:

The results of the Ateneo mock polls were at odds with the Xavier University’s mock polls in February, where Duterte led with a commanding 65.13%.

The Eastern Visayas Regional Tertiary Schools Press Conference mock poll in February also put the tough-talking mayor from Davao City in the lead with 39.6% of the vote.

At the University of the Philippines, a poll held across 3 campuses saw Miriam Defensor Santiago clinch the top spot with 56.2% of the vote.

The Ateneo polls were conducted in coordination with various units of the university, such as the Office of the Vice President for Social Development, Information Technology Research Management Office, Office of Human Resources and Management Organization Development, Ateneo Task Force 2016, and Ateneo Statistics Circle, which led the tabulation and consolidation of data. – With reports from Lou Gepuela and Mark Barnes/Rappler.com

Mark Barnes is a Rappler intern. He is a 3rd year Communications student at the Royal Melbourne Institute of Technology majoring in journalism.