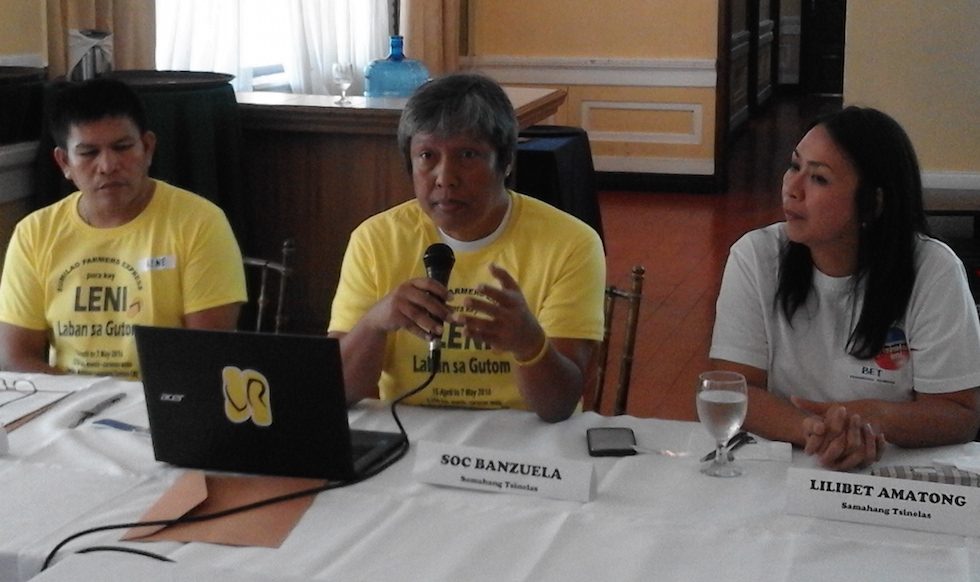 MANILA, Philippines – In 2007, the Sumilao farmers traveled over 1,000 kilometers from Bukidnon to Malacañang to fight for their land. Nine years later, they intend to do it again, but this time for a woman who marched with them.

Around a dozen of the farmers from the original march will troop to Manila once again to express their support for the vice presidential bid of the lawyer-turned-lawmaker who supported them during their fight – Camarines Sur 3rd District Representative Leni Robredo.

During a press conference held on Wednesday, April 13, members of the Samahang Tsinelas as well as the Laylayan Coalition announced the march would begin on April 15.

The farmers will start marching from San Vicente, Sumilao. They will then travel via trucks and ferries across the country. On April 30, they plan to be in Naga City, where they were once welcomed by former mayor Jesse Robredo, Leni’s late husband.

Their last stop will be in Metro Manila from May 6 to 7. Samahang Tsinelas members said they will be welcoming the group with a multi-sectoral gathering at the Quezon Memorial Circle.

May 7 will also be Robredo’s miting de avance. Soc Banzuela, a member of Samahang Tsinelas’ steering committee, said Robredo’s past involvement in the Sumilao case inspired the farmers to march again, this time to back their champion’s vice presidential bid.

The Sumilao farmers’ march in 2007 was over the issue of land rights. In the 1990s, they found out that their ancestral land, which they had been tilling for generations, already belonged to someone else because they had no official deed.

They had fought for years, including a hunger strike in 1997, before marching in 2007 which gained wide public support.

“Such was the public outcry that the likes of the late Jaime Cardinal Sin and Joseph Estrada, then a candidate for president, paid supportive visits to the hunger strikers,” according to a Newsbreak report.

Robredo, who was a human rights lawyer before she entered politics, supported the plight of farmers and other marginalized groups. As part of her work with the non-governmental legal group Sentro ng Alternatibong Lingap Panligal (Saligan), she defended the Sumilao farmers as a volunteer lawyer.

She was among the advocates who welcomed the protesting farmers when they reached Naga.

“Leni, as their lawyer, drafted a resolution of support and was signed by the city government,” explained Banzuela.

He added that the movement is organic: the farmers want to do something for Robredo.

(I thank them for their support and their faith that we will continue helping the poor, farmers, fishermen, and anyone else in the margins of society.)

Rene Cerilla, who was trained by Saligan as a paralegal, waxed nostalgic about his time working in Saligan with Robredo.

Comparing Robredo to her opponents, he said in Filipino that “seeing is still different from experiencing [poverty].”

Cerilla said that because Robredo has directly worked with the poor, she would be a strong ally within the government if she is elected vice president.

“Hindi man kami naroon, at least may kasama kami doon (We may not be in government, but at least we’ll have an advocate there),” he added. – Rappler.com