Apr 27, 2016 9:00 AM PHT
Stephen Pedroza
Facebook Twitter Copy URL
Copied
'When you pick the next leader, never again should you pick a dictator. Never again should you give up the freedom that people long ago fought so valiantly for,' says activist Susan Quimpo to a room full of students 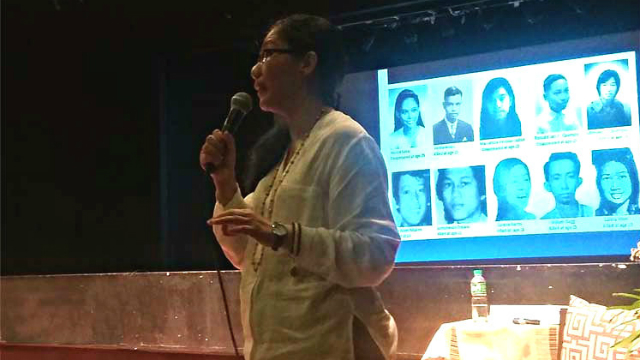 CAGAYAN DE ORO CITY, Philippines — More than 40 years after the declaration of Martial Law and despite having shared the tumultuous experience of her family many times, there are still instances when journalist and author Susan Quimpo gets emotional.

“I lived in fear for 14 years,” she said. “Ayaw ko nang bumalik doon (I don’t want to go back to that time), and I don’t want (what I experienced) to happen to you,” recounted Quimpo, who has been going around schools since 2012 imparting the painful lessons of Martial Law.

The co-author of “Subversive Lives: A Family Memoir of the Marcos Years” was at Xavier University – Ateneo de Cagayan on Monday, April 25, to share her family’s heartrending experience under the Marcos dictatorship to a room packed with young students, who were mostly neophyte voters.

Quimpo related that during Martial Law student leaders, especially student writers and student council officers, were “picked up by the military for questioning, at the minimum, and, most likely, tortured.”

“If you vote for a dictator, huhubaran po kayo ng inyong pagkatao (you will be stripped off your dignity),” she told the young crowd. “If you give a man the freedom to discipline people, he will abuse that freedom,” she said.

Quimpo hopes that this young generation will remember the young people who gave up their lives for this country’s freedom and democracy.

She noted that in the years leading to the declaration of Martial Law, there were already protests against then President Ferdinand Marcos for cheating in the 1969 presidential elections. There was also a noticeable deterioration in the quality of life of the people leading to a general dissatisfaction with his administration, and fears that he might change the constitution to remain in power.

“Parang binagyo ang ka-Maynilaan dahil araw-araw may mga rallies (It was like Manila was experiencing a storm because rallies were happening every day),” described Quimpo, “and the rallies were violent.” This time of unrest is now referred to as the First Quarter Storm.

Quimpo showed photographs of protests in Plaza Miranda and the Battle of Mendiola, which resulted in the injury and arrest of many college students and labor activists who had led and participated in the demonstrations out of anger.

One of those picked up by the military was his brother Ronald Jan because “he looked Chinese, wore glasses and had a University of the Philippines ID.

“Ronald Jan was the first activist in the family,” related Quimpo who is the youngest of 10 siblings.

Her brother was stripped naked, his head repeatedly plunged in a commode with urine, and his feet doused with water then shocked by live wire.

Although he was released from detention, he would eventually vanish without a trace, never to be seen again. He was only 23 years old.

Ronald Jan was not the only Quimpo sibling to be arrested and tortured. In fact, 5 of them were imprisoned, including another brother Ishmael (Jun), who would lose his life in the underground movement, and sister Lilian who was fortunate enough to survive torture and detention.

The stories of the Quimpo siblings are captured in “Subversive Lives: A Family Memoir of the Marcos Years,” which Quimpo co-authored with her brother Nathan and published in 2012.

“When I was writing the book, I had to go through the experience again, and find peace and closure,” imparted Quimpo.

An attempt to re-write history

During her talk dubbed “The Truth About Martial Law: Real People, Real Stories,” Quimpo also shared the stories of other martyrs of Martial Law, such as 23-year-old Liliosa Hilao who was the first student activist to die inside a military compound.

“They were very young people, like you,” Quimpo told the students. “Yet, they had to fight a dictator and give up their lives.”

She also distributed bracelets with the words “never again,” which she asked students to wear up to Election Day on May 9.

Senator Ferdinand “Bongbong” Marcos Jr, son of the fallen dictator, is currently leading the vice presidential race for the May 9 polls. In a Pulse Asia survey released April 26, Marcos topped other vice presidential candidates with a 29% voter preference.

Earlier this year, leaders of the Philippines’ 5 Ateneo universities, run by the biggest religious order in the Catholic Church, joined forces against the “revision of history” on Martial Law.

“There is an attempt to re-write history,” said XU president Fr Roberto Yap SJ, who was among the university presidents who signed the statement in March along with 530 other signatories from the Ateneo community.

“Even worse, we are asked to forget the past,” he said in his message during the event organized by XU’s Office of Mission and Ministry.

This attempt to re-write history and make people forget about the atrocities committed during the Martial Law is worrying for us as a people, Yap said, quoting national hero Jose Rizal, “Ang hindi marunong lumingon sa pinanggalingan ay hindi makararating sa paroroonan.” (If you don’t know how to look back to where you came from, you will not reach your destination.)

“We have forgotten the first part of what our national hero said,” Yap bemoaned. “If we forget our past, I don’t think any of those promises of a bright future will happen.” – with reports from XU Communications Office/ Rappler.com

Rappler’s Lead Mover in Cagayan De Oro City, Stephen Pedroza is a graduate of Development Journalism at Xavier University – Ateneo de Cagayan. He attended a course on new media in journalism at the Ball State University in Muncie, Indiana.