May 14, 2016 8:00 PM PHT
Jay Jaboneta
Facebook Twitter Copy URL
Copied
Among others, the campaign’s recognition of the value of maximizing social media led to a critical decision of making the team an important part of the overall campaign Let me cut through the chase. Here’s my list.

1.  The most successful digital strategies for the campaign were things that helped create a movement around the mayor – it created an advocacy around Mayor Rodrigo R. Duterte.

These activities included, but were not limited to: Building a sizable base on Facebook, including proliferation of Facebook pages and groups talking about the candidate. Building an email database. Sending of high-quality and engaging emails and other materials. Making the supporters an important part of the story. It allowed supporters to create compelling stories of the candidate in various forms like video, images, and text. Facebook (along with email and mobile) were heavily used to ask supporters to join offline activities.

2.  The Duterte campaign built a team from various volunteer groups who probably numbered in the thousands at the end of the campaign. Many of the most talented people in their individual professions became part of this team. For example, Nic Gabunada, former ABS-CBN top sales and marketing honcho, marshalled the digital warriors throughout the campaign period. Notable bloggers and social media specialists volunteered and worked side by side with their traditional media peers.

3.  More so than any other campaign in our history, the Duterte campaign was a data-driven operation. A simple and concise digital strategy was developed to be at the heart of the campaign. Virality of content became one of the key goals. The team tried its best to measure every aspect of the digital campaign, including messengers, messages, design, video, voice, segmentation and other tactics. Resources were directed to higher-performing activities. This is especially true for content that was going viral – the team helped by boosting it on Facebook.

4.  The campaign’s recognition of the value of maximizing social media led to a critical decision of making the team an important part of the overall campaign – having the same priority as the field operations, and finance and other units. The campaign was open to crowdsourcing content from the start, noting that it came with risks of not being able to check all the materials.

5.  The campaign used a simple measure of success: the value of higher engagement on Facebook over the lifetime of the campaign. The campaign boosted content that was resonating with supporters and voters. Building the relationship with supporters over time produced better results – done by engaging with the different volunteer groups both locally and abroad. 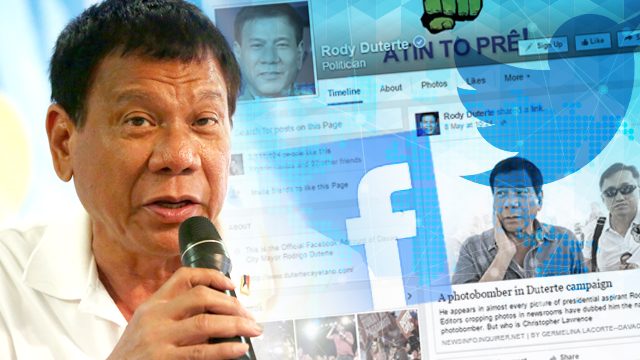 6.  What made Duterte’s campaign materials special? The volunteers and supporters were given the creative leeway to design it based on their own interpretation of the campaign narrative and it then allowed the messaging to be strategically aligned with what voters cared for at the moment. This even spread offline where supporters created their own T-shirt designs and used their own money to print them as well.

7. There was strong coordination between the digital and field teams. Facebook allowed faster communication between different supporters and groups supporting Mayor Duterte.

8.  Thousands of online/digital content was created by volunteers and supporters themselves – this included hundreds of songs composed and created by various musicians for the candidate. The vision for the use of video was different from past campaigns. The team was not selling a candidate, they were simply covering the movement around the campaign. The team was able to engage people, draw in viewers and make them feel like they were part of something big. This was called by one online social media firm as citizen-led campaigning and that is what truly happened.

9.  The team curated content that was coming out from the volunteers and supporters and segregated it based on the target market: Facebook videos and image memes for Class D, E; high-quality and informative videos and platform-based content for Class A, B, C – overall, the team allowed supporters to co-manage the campaign.

10. It has to be mentioned that the way the candidate conducted himself allowed his supporters to create content about him and about his campaign. In the end, the candidate allowed the people to see him as the authentic candidate compared to his rivals who were perceived to be following a script. – Rappler.com