A US Peace Corp volunteer’s journey with Badjaos

Feb 7, 2012 4:22 PM PHT
Phillip Olaleye
Facebook Twitter Copy URL
Copied
I was excited to be needed immediately, having left a career on Wall Street for the intrinsic rewards of service 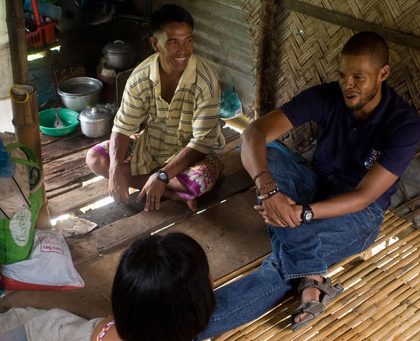 MANILA, Philippines – Over 2 years ago, I arrived in the Philippines as a US Peace Corps Volunteer. I was assigned to a 2-man, non-profit organization in Apalit, Pampanga named God’s Love for the Indigents Ministry Inc (GLIM).

GLIM caters to a modest, indigenous Badjao community that lives peacefully underneath the old Sulipan bridge.

This water-dwelling­ tribe of “sea gypsies” hails from the poorest region in the country – the Autonomous Region in Muslim Mindanao. Civil war and ethnic persecution force large numbers of Badjaos to escape and flee to other parts of the country for better opportunities. But the move can prove difficult.

Myriad challenges await these migrants, namely homelessness and a complicated land-based assimilation into a foreign community. Local governments are not equipped with the cultural know-how to assist in the integration process and are often indifferent altogether.

As a result, Badjao-migrant groups are unable to secure even the most basic human needs: proper shelter, education, regular meals, potable water, and health services – each troubling factor combining with the others to create dire conditions.

GLIM was co-founded by Edwin and Perla Villanueva, a dynamic couple not short on passion and ideas. But GLIM was still in its infancy, lacking organizational capacity and material resources.

Indeed, even before I became a volunteer, Peace Corps officials were buzzing about the challenges underneath the bridge – working out of a sawali hut with no electricity, juggling three languages (Tagalog, Kapampangan, Badjao), building a start-up NGO, while supporting one of the most marginalized groups in the country.

But what they labelled as obstacles I took as opportunities to lead, assist, learn and grow. I was excited to be needed immediately, having left a career on Wall Street for the intrinsic rewards of service.

After Ondoy and Pepeng

My first site visit took place in the aftermath of Typhoons Ondoy and Pepeng. I remember how I felt about the situation then, seeing the Badjaos on top of the bridge, practically sleeping on the hard, muddied concrete. No covering or protection whatsoever from the punishing elements. The scores of infants and kids scattered everywhere. The pungent smell of dried-up garbage, human excrement and filth.

My enthusiastic 2-year outlook of Peace Corps service was completely deflated. My face smack dab on the pavement of a reality that dwarfed any worst nightmare. I did not know anyone that well at the time, but I never wanted to relive that moment again.

Typhoons again hit my rural town in late September/early October 2011. Pedring and Quiel brought blindingly fast floods and unforgiving destruction. 18 of the 34 community huts in my Badjao community were lost, while many others were too damaged to return to. The GLIM community center suffered irreparable damage.

The staff braved the rising waters and nasty conditions to set up makeshift tents on top of the bridge for our 86 families – a sad excuse for a relief site, let alone a home. As for myself? All of my personal items were ruined. My laptop, electronics, books, clothing were simply gone.

Upset as I was, I was not physically hurt. My host family, friends and Badjao residents were all accounted for. I could replace most of my lost items. “Bahala na ’to” or to borrow an American colloquialism, “It is what it is.”

My neighbors issued words of encouragement, helping me clean the thick, sticky Pampanga mud out of my apartment. That level of support and consideration meant the world to a person who had just lost everything, especially since they’d lost so much more than I did.

At one point I even had my bare hand inside the basin of my toilet scrubbing away the gunk. I started laughing without any care in the world. At that moment I was completely numb to it all. My perspective, fittingly enough, had been hardened by the exact reality faced on a daily basis by many in the Philippines. “Bahala na ’to.” Let’s move forward. I need a clean toilet. It was that simple.

Poverty comes with its full range of complexities. It is easy for me to exhort my Badjao community learners to keep at it, framing an investment in one’s self as a means toward a brighter tomorrow. Easy because I am not a child laborer. I have access to medical care, reliable (well, sometimes) electricity, potable water and a hot meal. I don’t live in a cramped hut underneath a decrepit bridge.

I try to draw myself closer to the Badjaos’ struggle. I spend hours listening and conversing, laughing, working and projecting an image of someone who is not afraid to get involved and dirty.

When I arrived in the Philippines my focus shifted from an academically honed development methodology to a more grassroots approach that involves employing personal capacities such as servant leadership, an action orientation, courage, and persistence to build a consensus in support of my ideas and create social change.

Who cares if you have all the answers if nobody is willing to listen or take ownership?

Unfortunately, Peace Corps is only a 27-month commitment. While forging friendships and cultural exchange are personally satisfying, providing sustenance and basic needs is still foremost in my mind.

Social progress, especially for the poor, is a painstakingly slow pursuit. More often than not, results materialize in miniscule dribs and drabs – not at a grand, sweeping scale. Furthermore, progress is rendered moot when you include the routine natural calamities that have devastating consequences for many innocent Filipinos (those affected the most inordinately being the poor and homeless). Inequalities like this are so blatantly clear in the Philippines, making upward mobility a difficult process to assist in, let alone even fathom, especially for the millions in the bottom rungs of society. My resilient Badjao bunch constantly assures me that all is well, issuing heartening phrases such as: “Ok naman kuya…Simple lang ang buhay namin” or “It is ok Phillip, we lead just a simple life.”

Keeping the right perspective is crucial in times of hardship. But this is no easy task. The faces of poverty that I encounter are masks that I can only attempt to wear, look through and understand. What I can never fully replicate or grasp are the experiences that match up with and inform the perspectives and attitudes exhibited by my Badjao brothers and sisters.

In the first place, how could I? I willingly “volunteered” to be put in my community, to handle these difficult situations. I have the luxury of choice and they, unfortunately, do not.

As obvious as this appeared going into the Peace Corps, it is hard to remain objective and detached. After two years, I am no longer a stranger in my community or to the Filipinos with whom I work and help support. Thus, I try hard to accept my limitations, appreciate and understand our differences, and work best within these constructs. Bahala na ’to.

After Pedring and Quiel, I was sitting on the concrete under one of the makeshift tents on the bridge trying to be present and supportive. But deep down inside I was crushed. In a selfish way, I wanted the community to be more outwardly disappointed. How many times is this same scene going to repeat itself?

The only complaint I heard was from a male pearl vendor who said it was a bit chilly at night. That was it. I thought about it. As a poor, displaced, ethnic tribe, what could they do? Life was back to normal. The kids were still laughing and making fun of my kulot or curly hair. The men still crouched in a circle playing their card games, while women willingly offered me merienda or afternoon snacks. After declining (how could I accept?), I walked up to the new bridge to catch a tricycle back home. As I climbed into a trike, one of our Badjao students chased me down with a bag of cookies and bottled ice tea. How could I decline?

Wow. I was so touched by their humble perspective. In a roundabout way, they were right. They were living proof. Bahala na ’to was not some soft excuse to acquiesce and be content with things as they are. But more of a rallying cry to face all-comers, push forward and continue living.

This too was evident with GLIM. Years worth of action from 2 ordinary citizens, facing daunting odds and wide criticism, paved the way for Badjao honor students, women-led cottage industries, strengthened life-skills and much more.

In only 2 years we have built an agency that is respectable and a community framework that protects dreams and inspires lives. Much has been done against all odds and with limited resources, springing forth the ultimate triumph: hope.

I said that my goal coming into service was to help deliver a suitable and permanent land to our Badjao community. A place to call home. A place that the Badjaos and GLIM could build and cultivate. In short, a real future.

Disaster mitigation also meant breaking the vicious cycle of poverty and catastrophe by securing a plot of land that offers a true chance for Badjao development. Only then could GLIM start building something lasting and truly fulfill our goal of an empowered, educated, and recognized Badjao base.

Right now, the community has been temporarily relocated to San Simon, Pampanga. Once again having to interrupt their lives, pick up everything, move and start anew. A stable home represents one of the most precious of all human rights. How can we expect a marginalized group to sustain the momentum necessary to grow their own capacities and live peacefully if they are constantly dealing with turmoil, insecurity and public indifference?

With my original Peace Corps commitment finished, and a 5-month service extension ahead, I have already gained a unique and invaluable range of skills and perspectives. Most importantly, I have made friendships that will last a lifetime. The road has been long and the path demanding, but I am a better man because of this experience—the Philippines and the Badjao being my faithful instructors. – Rappler.com