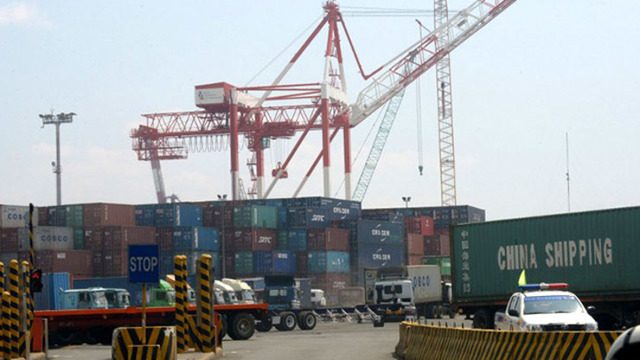 Facebook Twitter Copy URL
Copied
(UPDATED) President Benigno Aquino III signs the Customs Modernization and Tariff Act which is expected to reduce corruption in the Bureau of Customs, as well as technical smuggling in the country

President Benigno Aquino III signed Republic Act No 10863 or the Customs Modernization and Tariff Act (CMTA)  on Tuesday, May 31, which increases the tax-exempt value of items sent via balikbayan boxes by OFWs to their families back home.

The law also raises the de minimis value from P10 to P10,000. The de minimis value refers to the value of tax and duty free goods as well as the minimum cost required for items to undergo formal entry via the Bureau of Customs (BOC.)

Senator Juan Edgardo “Sonny” Angara, ways and means committee chairman and CMTA sponsor, said the law also provides for an “automatic indexation” of the amounts every 3 years to account for inflation.

The House of Representatives approved the CMTA on November 12, 2015, while the Senate passed its version on January 18, 2016.

Angara thanked Aquino for signing the bill, and his fellow legislators for the passage of the bill into law.

“With the increase in the values, we lessen the discretion of the Customs officials to inspect goods and collect taxes, thus minimizing cases of corruption and smuggling,” said Angara.

Palace Communications Secretary said on Wednesday that Aquino signed RA 10863 to “boost the capability of the Bureau of Customs (BOC) as one of the top two revenue collecting agencies of the government.”

“The new law likewise enables the country to align customs management and tariff administration with the standards and practices of 140 other countries, who are signatories to the 1999 Kyoto Convention that promotes predictability and efficiency in international trade,” said Coloma.

RA 10863 allows every OFW to send up to 3 P150,000-worth of tax and duty free balikbayan boxes every year, provided that the goods are not intended for sale, barter, hire, or other commercial purposes.

Under the new law, Filipinos who stayed overseas for several years but who plan to return to the Philippines will be provided with tax exemptions for personal and household items they bring back home.

OFWs who lived abroad for 10 years will get a P350,000-tax exemption while those who lived overseas for at least 5 years will be entitled to tax and duty free personal and household effects worth P250,000.

Meanwhile, Filipinos working abroad for less than 5 years will enjoy a P150,000-tax-free ceiling.

The BOC’s inspection of balikbayan boxes became a hot topic in 2015, after the bureau warned OFWs not to abuse their balikbayan box privileges.

Customs Commissioner Alberto Lina said in a statement that the new law will help improve BOC revenues while reducing corruption and technical smuggling.

“Emphasizing the ease of trade through streamlined processes, the CMTA will establish the requisite foundation for a cashless, faceless and paperless environment in Customs, reducing corruption and technical smuggling that will result to enhanced revenues,” he said.

Angara said RA 10863 aims to streamline services and modernize the BOC, including “import clearances and valuations, making the release of goods much faster, regardless of whether you are an individual entrepreneur or a large multinational.”

He said the law mandates that the BOC make use of information and communications technology to improve its services as well.

Angara expressed hope that the CMTA would help change the perceived image of the BOC as “one of the most corrupt and underperforming government agencies in the country,” which has prompted President-elect Rodrigo Duterte to vow to privatize the agency.

“Pero umaasa tayo na sa pamamagitan ng mahigpit na pagpapatupad ng batas na ito at sa tulong ng bagong administrasyong Duterte, magbabago at maisasaayos ang kalakaran ng Customs (But we are hoping that through the strict implementation of this law and with the help of the Duterte administration, we will be able to fix how Customs is being run),” he said. – Rappler.com