Will you support the Metro Manila Pride 2016? 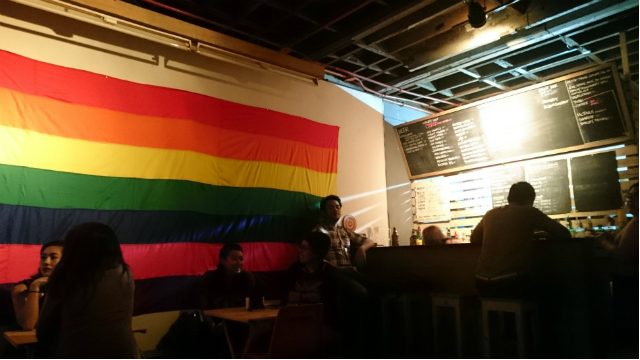 MANILA, Philippines – Amidst the heavy traffic of Friday night, June 10, a group of people fighting for the LGBT cause got together at a bar in Kamuning, Quezon City. What ensued was an evening of get-togethers, chill music, and a bunch of TV series episodes playing on mute – just like a typical night out with friends.

The place, Catch272/Boho, is relatively small, giving off an intimate vibe. Warm lighting accented the bare walls, and a huge rainbow flag was aptly hanged on one side of the bar.

People were laughing, chatting, drinking alcohol, and eating snacks. It was a safe haven where gender is a nonissue, a girl around the age of 5 is exposed to what others would call immoral, and boys and girls (and everything in between) share a common restroom.

The event started late, typical of Friday night rendezvous. After an introduction by host Gyk Tangente, who amused the crowd with her wittiness, Loreen Ordoño of the Metro Manila Pride organization conversed with the audience and talked about the main reason for the night’s gathering.

It was a fundraising event held by the organization in preparation for their annual pride march, happening on June 25. It also served as the official launch of Pride Month, celebrated every June.

Metro Manila Pride, which is the rebranding of the Task Force Pride or the official organizing network of the annual Philippine LGBT Pride March in Manila, has been organizing the march for 3 years, though the history of Pride March in the country goes way back to 1994.

For the 22nd anniversary of the Manila Pride March, the theme is “Let Love In. Kahit Kanino, Kahit Kailan.” It is the culmination of their love campaign, which started with 2014’s “Come Out For Love kasi Pag-ibig Pa Rin,” which was aimed not only for the LGBT community but also for their allies, such as officemates, classmates, friends, and families.

It was followed with 2015’s “Fight For Love: Iba-Iba. Sama-Sama,” which urged people to fight for the love that they came out for.

“’Let Love In’ is a call to everybody – to the families, friends, coworkers, and friends to let love in. It is also for people within the LGBT community who still haven’t done it, who haven’t let love in,” she explained.

“After coming out, and fighting for it, it was natural to ask people: Ano na ba? (What’s next?) Let love in,” she added.

“There’s so much hate, especially with the recently concluded elections (where) LGBT issues were at the forefront several times during the campaigns,” she said. “Instead of letting hate prevail, dapat pairalin natin yung pag-ibig. And since love should exclude no one, kailangan papasukin mo yung pag-ibig or pairalin mo yung pag-ibig para kahit kanino ‘tsaka at whatever situation.”

Giselle Diaz, a UP law student, performed spoken word poetry in response to the “pabebe” backlash that the “pabebe girls” experienced from the public when their online video rant went viral. The piece was a satirical take on sexism and self-empowerment – the discomfort that society feels when a woman finally learns to take pride in herself.

The next performance, which happened some time near midnight, was an hour-long act by Hoochie Coochie Mikkie. Playing a harmonica, a single drum, and a “shiny, shiny” silver guitar, Hoochie Coochie Mikkie is a one-man band that energized the audience with his husky voice and sultry blues.

The night eventually ended but the Pride Month celebration is just beginning. Metro Manila Pride is collaborating with other organizations in order to raise the needed fund of approximately P184,000 ($3,990) for the festivities.

On June 17, Words Anonymous will have a spoken word night at Splice Resto Bar in Mandaluyong called “IpagLOVEan: Let Love In.”

And on June 19, Ampalaya Monologues will also have a spoken word night at O Bar in Ortigas. Part of the proceeds of the three events will go to the Metro Manila Pride March.

Metro Manila Pride is in need of support from the public. They welcome every helping hand – be it through donations, services, or a mere show of solidarity. – Rappler.com

Renzo Acosta is a Rappler intern.