Why so gloomy? Netizens disappointed with Yasay reaction to South China Sea ruling 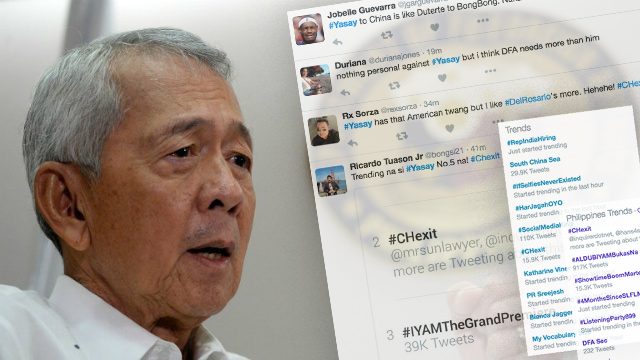 MANILA, Philippines – Department of Foreign Affairs (DFA) Secretary Perfecto Yasay got the ire of netizens on Tuesday, July 12, after the Philippines won the controversial case against China on the West Philippine Sea.

#Yasay and #DFASec trended on Twitter, with many netizens feeling “disappointed” with Yasay’s reaction to the ruling.

I don't want Yasay as our DFA secretary if he keeps that position of his right now. Nakakairita.

A lot of netizens also noticed how the foreign affairs secretary used South China Sea instead of West Philippine Sea when he called for restraint following the ruling.

You may still refer to the West PH Sea as South China Sea, according to no other than SFA Yasay. This, after that landmark ruling. YOCO NA!

Some netizens even called Yasay a “party-pooper” because of his non-jubilant reaction despite the nationwide celebration. (READ: #CHexit: Filipinos celebrate PH victory over China)

“[The] Tribunal concluded that, as between the Philippines and China, there was no legal basis for China to claim historic rights to resources, in excess of the rights provided for by the Convention, within the sea areas falling within the ‘nine-dash line’,” a press release from The Permanent Court of Arbitration (PCA) said on Tuesday.