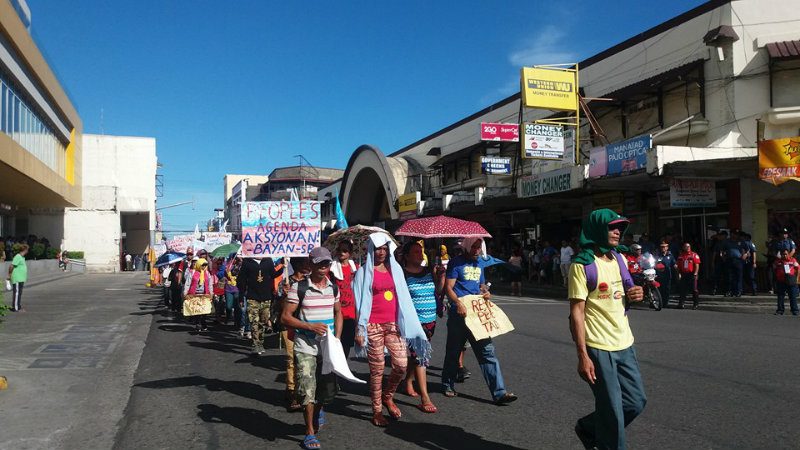 A few days after Yolanda barreled through Eastern Visayas, then Davao City Mayor Rodrigo Duterte visited Tacloban City, one of the areas most devastated by the disaster.

Duterte sent a convoy of medical teams that included 20 doctors, 20 nurses, and 40 relief workers to help in the massive search and rescue operations. He also brought P7 million in cash donation for Tacloban and Leyte.

If the gathering in Leyte is any indication, the Yolanda survivors did not forget how Duterte responded to their needs in the aftermath of the disaster.

People’s Surge spokesperson Marisa Cabaljao said that they are calling for Duterte to conduct a thorough investigation on the alleged stolen funds dedicated for the recovery and rehabilitation of Yolanda-affected areas.

“We are applealing to President Duterte to conduct an investigation to give justice to those victims of Typhoon Yolanda.  Let them get what they are supposed to get. We have trust in you,” Cabaljao said.

According to the Waray-Waray people who came from various towns in Eastern Visayas, they are satisfied with the President’s performance in his first month in office. They added that they are looking forward to his plans in the next year.

Sarah Dixon, a 32 year old single mom who lost her job after Yolanda, is optimistic she will be able to find a job this year with Duterte as president. “He is giving me the opportunity to get ahead in life. He is creating more jobs and opportunities to get another job,” Dixon said.

Jesus Dacaynos, a 63-year old retired government employee who said he was “eased out” of his job, lauded Duterte’s one-month performance, particularly his plans to solve poverty and establish peace and order across the country.

“There seems to have a lot of improvement especially on peace and order.  However, a lot could be done, especially in addressing the needs of the less privileged families,” he said in Filipino.

Meanwhile, Tacloban City Vice Mayor Jerry ‘Sambo’ Yaokasin hopes that Duterte will support the full development of the Tacloban Airport. In November 2014, the Aquino administration promised to finish the ehabilitation of the airport by January 2015.

Yolanda severely damaged the airport, a major thoroughfare for tourists and businesses coming in and out of Leyte. Yaokasin claimed that the Aquino administration failed to deliver on its promise.

Commenting on Duterte’s performance, Yaokasin noted that the President “is doing good and effective at this time.”

Leyte Vice Governor Carlo Loreto shared his wish-list to Duterte, according to him the president will surely express his strong position against criminality and illegal drugs.

Loreto is optimistic that the new administration will deliver on fiscal policy, charter change, and priority legislative agenda, and implement projects that will help improve the situation in the province. – with a report from Jazmin Bonifacio/Rappler.com