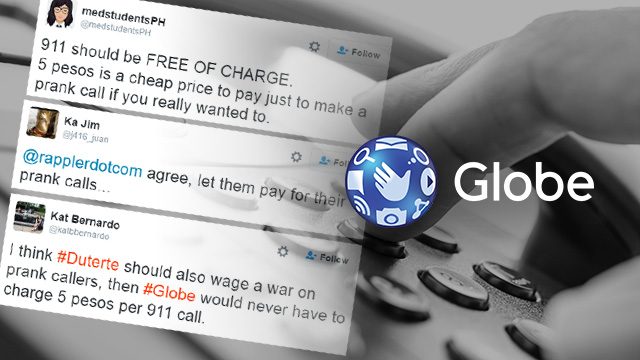 MANILA, Philippines – Should telecommunications companies (telcos) charge calls made through the 911 hotline?

On Thursday, July 28, netizens criticized Globe Telecom over it’s announcement of charging an additional P5 aside from the regular voice charges for subscribers calling the planned Philippine 911 hotline, an idea suggested by the government to discourage prank callers. Other telcos may also levy a charge.

Presidential Communications Secretary Martin Andanar earlier announced that a 24-hour hotline for citizen complaints and an emergency hotline, one of President Rodrigo Duterte’s campaign promises, will go live in the Philippines in August.

Filipinos took to Facebook and Twitter to express their disappointment about the decision saying emergency calls to the hotline should be free.

How to deal with prank calls

Commenters argued that emergency calls should not be charged and suggested ways to deal with prank calls.

“An emergency is an emergency. Prank calls or not, no one should charge extra for emergency calls”, said David Christopher Castillo commenting on a Facebook post. “Though it is a given fact to be prepared, it is, at most times, inevitable that there will be a time that you won’t be”.

Another Facebook user, Danilo Mangila Adiao, suggested the implementation of a law requiring the registration of sim cards in order to easily identify prank callers.

According to Globe General Counsel Froilan Castelo, the idea was originally suggested by the government to discourage prank calls.

“As suggested by the government to discourage prank calls, we would also like to inform our customers that those calling the hotlines will incur regular voice charges plus an additional P5/call for those calling the 911 hotline,” Castelo said in a statement, July 27.

Twitter users also expressed their sentiments against the issue.

911 should be FREE OF CHARGE.
5 pesos is a cheap price to pay just to make a prank call if you really wanted to.https://t.co/t24sc2JkKC

I was gripped with resent about the latest statement of Globe that requires 5-peso load to be able to dial 911. wew

I think #Duterte should also wage a war on prank callers, then #Globe would never have to charge 5 pesos per 911 call.

@MovePH No. The government should pay for this service. Pranksters should be punished. Reality check is can the government afford?

@MovePH what happens if you don’t have any load? I think they need to rethink this carefully.

@MovePH Implementing a strict policy sounds like a better idea. Warn them the first time. Deactivate the number the next time.

Meanwhile, some netizens agreed with the additional charges but suggested that emergency calls should only be charged when a person has load.

“It’s okay if there is a charge. Although, hopefully, the public can still call the hotline even without load,” Yuphie Cuanco said in Filipino on a Facebook post. “Then they could charge when the next time the person loads up his or her mobile phone.”

“Don’t charge the call immediately. Let the operator decide on whether the call is legit or otherwise,” he said. “Charge the prank caller P1000 and a court summon.”

@rapplerdotcom i agree with this one, alam ko sa US ata may charge din pagtawag sa 911

@rapplerdotcom agree, let them pay for their prank calls…

As mandated by the government, Globe said they are prepared to relay voice calls for the 911 and 8888 hotlines starting August 1.

Tessa Barre is a student at UP Diliman and a Rappler intern.