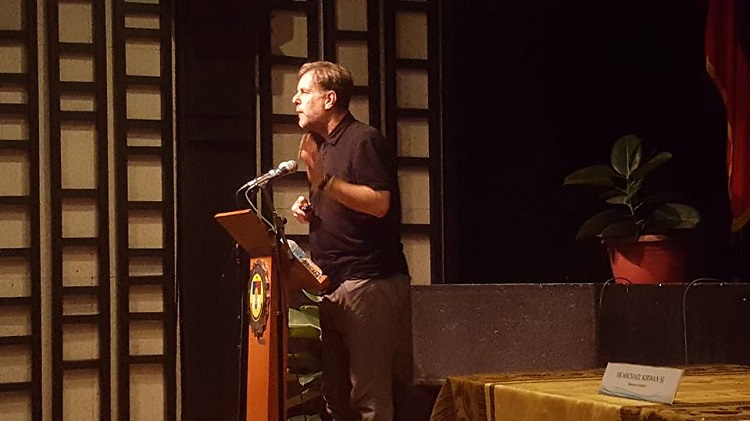 CAGAYAN DE ORO CITY, Philippines –  In a document that lays down revised foundations for the Catholic Church’s teaching on a host of issues related to family life, Pope Francis reminded married couples that a good marriage is a dynamic process:

“Love does not have to be perfect for us to value it,” Pope Francis said in Amoris Laetitia (The Joy of Love), a 200-page “apostolic exhortation” to the world’s 1.2 billion Roman Catholics.

The document cites contemporary challenges faced by families throughout the world, reflecting on the Pope’s instinctive tendency to try to make the Church seem a more merciful, less judgmental body in relation to those faithful who find themselves in “irregular” situations.

In a lecture recently held at Xavier University in Cagayan de Oro City, a Jesuit academic and author explained that the apostolic exhortation asks the church to help families make good decisions in life, taking into consideration their own struggles and issues.

“It is about taking the time, giving something the time it needs. Pope Francis wants us to be gradual about our pastoral care and not looking for instant results,” said Fr Michael Kirwan SJ, director of University of London’s Heythrop Institute for Religion and Society (HIRS).

The scholar reiterated how Pope Francis views the church and its pastoral work – that the church is like a field hospital.

“This means that the treatment you give to the wounded soldiers in the field is different from the treatment when they are recuperating later down the line. Time makes the difference,” he said.

Kirwan underscored patience in the church’s pastoral care and ministry to families. The apostolic exhortation, he said, asked married couples, families, and pastoral ministers to care for those in need of the Lord’s mercy and healing.

Amoris Laetitia encouraged the church to consider the complexities of people’s lives and to respect people’s reasons behind their moral decisions.

Pope Francis, himself the son of divorced parents, said that the aim of the church is to “accompany, discern, and integrate” the people who fell short of the Christian ideals.

However, the document also drew criticism from various groups.

In July, conservative and liberal church officials and scholars sent an appeal to the College of Cardinals asking Pope Francis to “repudiate erroneous propositions” contained in Amoris Laetitia.

Kirwan was among those who posed questions, but he also suggested ways “to push the apostolic exhortation further forward.”

“What about the negative aspects of family in Jesus’ teaching: ‘hate father and mother,’ ‘the sword which divides,’ and others? For some theologians, the essence of Christian discipleship is the decoupling from family, tribal, and national identities,” he said.

Kirwan said that Amoris Laetitia should have also discussed the child sexual abuse cases, including those committed by priests and nuns in various parts of the world.

“Something powerful could have been said here about the child sex abuse scandal, as a global phenomenon, which takes place largely in the family,” he said.

Amoris Laetitia is the result of Pope Francis’s reflection on the two synods of bishops held in Rome – Extraordinary Synod in 2014 and Ordinary Synod in 2015. Both tackled controversial issues on marriage and family. – with a report from Agence France-Presse/Rappler.com