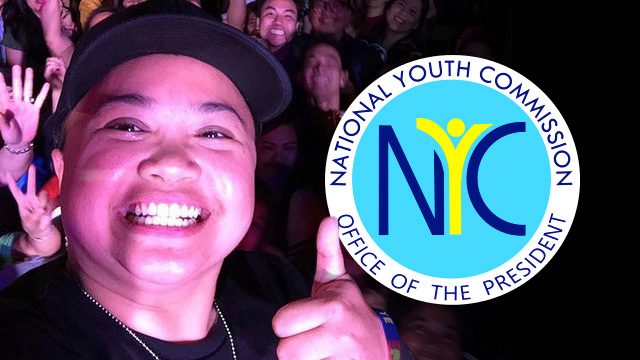 MANILA, Philippines – Singer and actor Aiza Seguerra has been appointed new chairperson and CEO of the National Youth Commission (NYC).

NYC Assistant Secretary Earl Saavedra announced the appointment by the President of Cariza Yamson Seguerra as undersecretary and head of the Commission Friday, August 12, during its celebration of International Youth Day.

“I take the opportunity to formally announce to everyone, with great honor, the appointment of the new chairperson of NYC, Cariza Yamson Seguerra, the newest member of the NYC family,” Saavedra said.

Seguerra, together with partner, Liza Diño, has been a vocal supporter of President Rodrigo Duterte even prior the 2016 elections, campaigning for him both online and offline. Seguerra has also urged other Duterte supporters in the past not to be blind followers and to respect the opinion of others.

“It will help our President kung hindi tayo one-sided at marunong tayong magbigay ng respeto sa opinion ng iba (if we aren’t one-sided and if we respect the opinion of others) instead of fanning the flames of hatred towards people who don’t share the same point of view or opinion,” Seguerra wrote in a previous post.

A musician and former child actor, Seguerra has also supported the Lumads or indigenous peoples in Surigao del Sur. In September 2015, the Lumads have been on the receiving end of  reported attacks, killings, arrests, harassment, zoning, and vilification in Lumad areas.

Seguerra takes the place of former NYC Chairperson Gio Tiongson who led the agency from 2014 to 2016.

During the IYD celebration, NYC also celebrated the achievements of the Filipino youth in reforming the Sangunniang Kabataan.

“Each one contributed the needed fair share to revolutionize the SK structure. With everyone’s unified efforts, we succeeded with our goal to reengineer the structure for the better,” Saavedra said.

Through its programs and projects that cater to the youth, the NYC serves to provide 30 million Filipino youth with opportunities to be an active partner in nation-building.

The government needs you to make the change happen for the Philippines. Click here to apply for government jobs on the Rappler x Kalibrr Job Board.