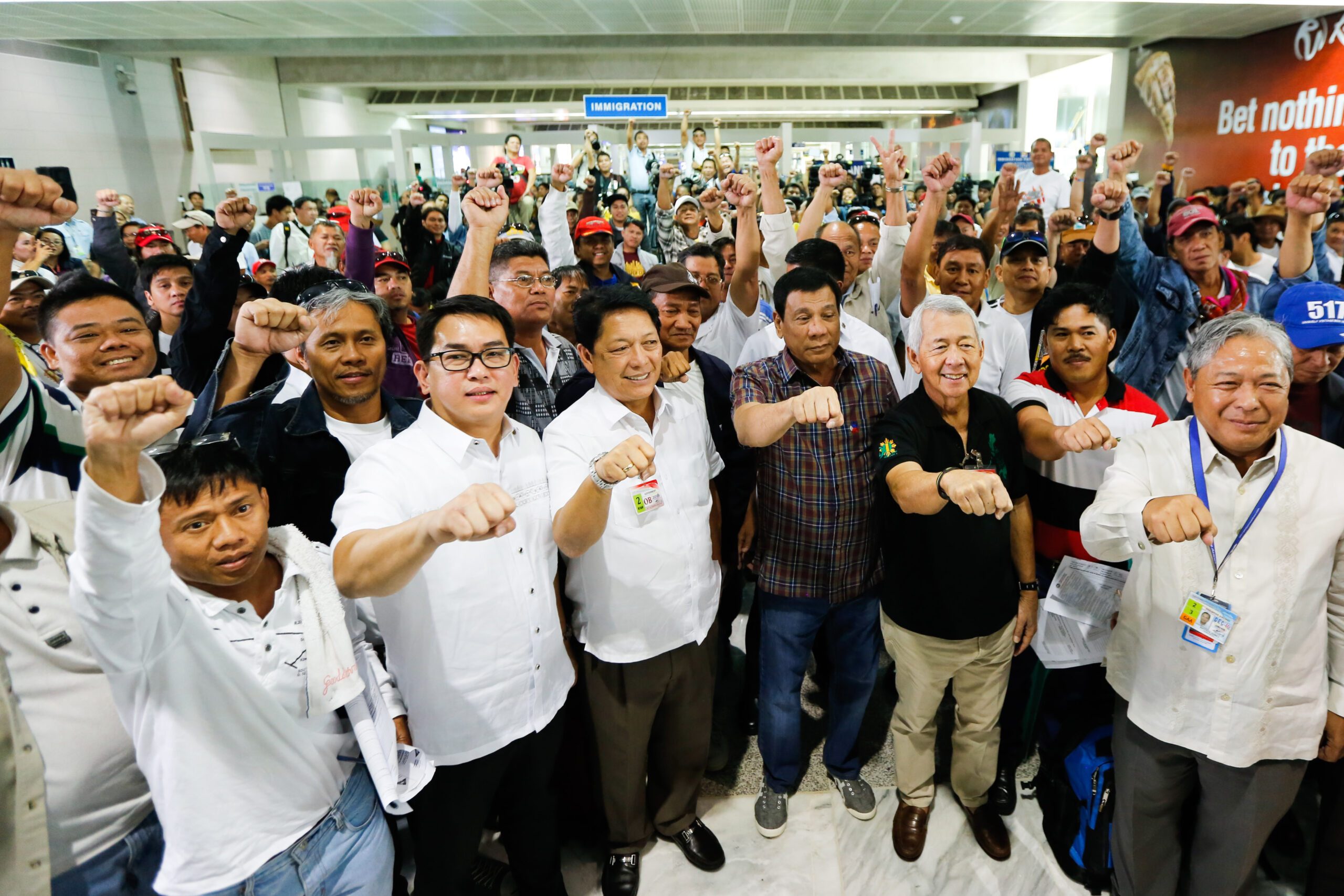 MANILA, Philippines – “Masaya kaming lahat. Sa bibig ng lahat ‘Duterte’ (We are all happy. Everyone speaks the name ‘Duterte’),” said overseas Filipino worker Ali Palacundo after he and 127 others were welcomed back to the Philippines by no less than President Rodrigo Duterte.

Minutes after they arrived aboard a Philippine Airlines flight on Wednesday, August 31, Duterte told them at the Ninoy Aquino International Airport Terminal 2, “Welcome to your country at tulungan ‘nyo ako (and help me).”

The 128 OFWs are former employees of oil and gas company Mohammad al-Mojil Group (MMG), a company that laid off many workers after oil prices plummeted.

Palacundo was fired from his job as a mechanical engineer at MMG in 2013. He waited two years until he could go back home. 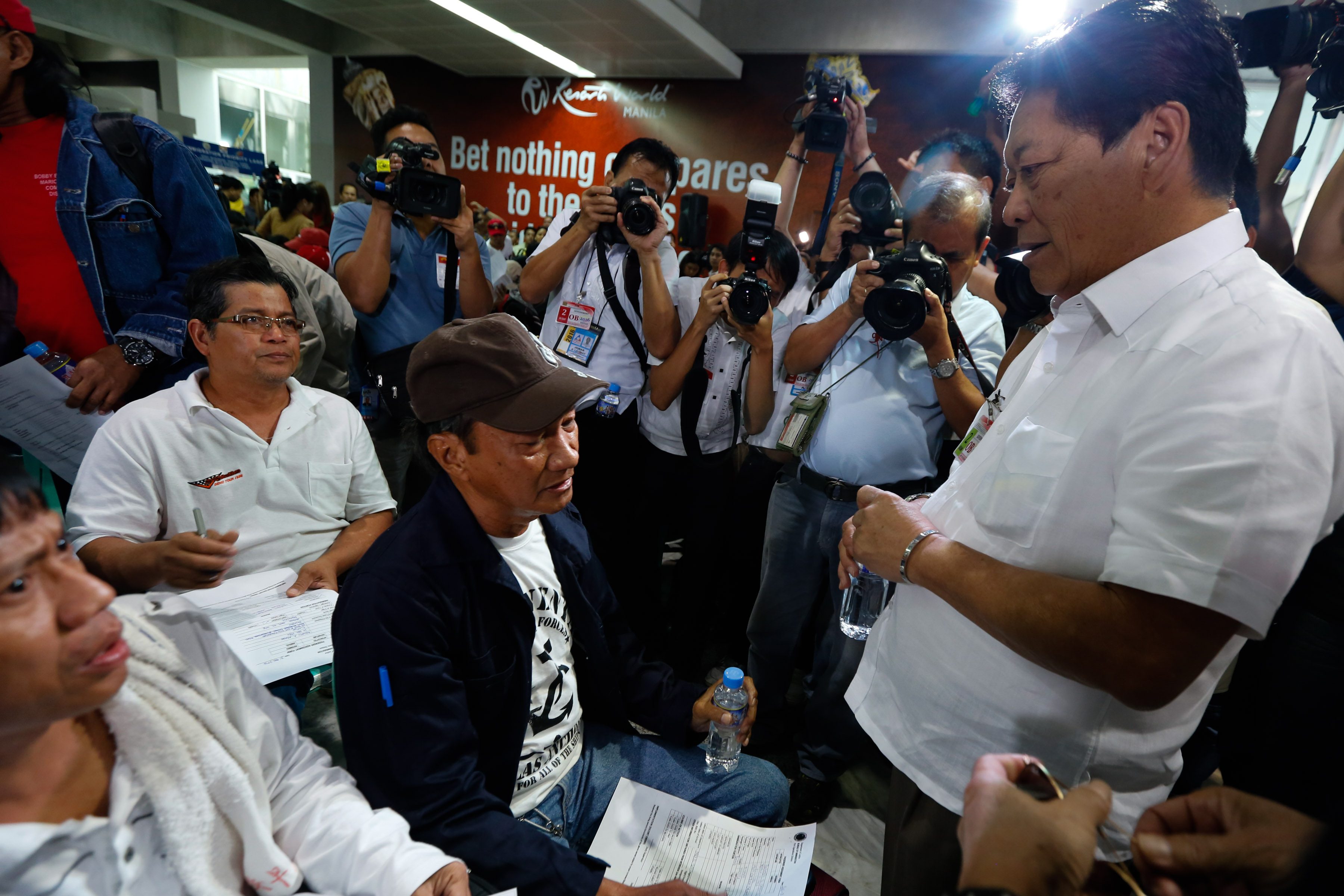 He alleged MMG had been blocking their exit passes, preventing them from flying back.

(Our company was putting us against a corner; we couldn’t leave. Then in 2015, we complained, we asked for help from the previous government. Someone would come but it seems they weren’t giving us their attention.)

But when the Duterte administration took over, things seemed to go faster.

“Umasa rin kami hanggang sa nagbago ‘yung administrasyon, ‘yun napabilis, at saka true to his word si Presidente Duterte na tutulungan niya ‘yung mga OFW (We continued to be hopeful until the administration changed, things sped up, and President Duterte was true to his word that he would help OFWs),” he said.

‘Find me a plane’

Addressing the OFWs, Duterte said he had wanted to fly to Riyadh, Saudi Arabia, himself to attend to their problem but he was advised not to because it would seem like the Philippine embassy there was not doing its job.

(Two weeks ago, I told them, ‘I will leave for Riyadh within 72 hours. Find me a plane….Truth is, they said it’s okay. You don’t need to go here because it will seem like they are not doing anything.) Pepito Resnera Jr, who was a staff of MMG’s mechanical division, described how desperate their situation was.

“Wala kaming pera, hindi kami makaalis. Para kaming nasa preso (We had no money, we couldn’t leave. We felt like prisoners),” he said.

Most of them have not been paid more than a year’s salary.

According to Resnera, some of them still await payment for 25 months of work.

And so it seemed like a balm to their soul to hear Labor Secretary Silvestre Bello III that lawyers tapped by the government would make sure they get their pay.

(Your salaries, end of service payment, our lawyers will get it from there. We won’t let them come home if they don’t have it yet.)

Bello added that the government was giving each of them P26,000, P6,000 of which is for their wives.

Duterte followed it up with his own cash gift. Resnera too, is grateful for the administration’s help.

“Walang pumapansin sa amin. Dahil sa nangyari, nakauwi na kami (We were ignored. With what happened, we got back home),” he told Rappler.

While Duterte promised them cash, he also promised long-term benefits for the workers.

“Bigyan ‘nyo lang ako ng kaunting panahon at may opportunity for you to work here (Give me some time and you will have an opportunity to work here),” the President said.

There are hundreds more OFWs in Saudi Arabia who have lost their jobs and want to fly back to the Philippines. Resnera said that in their group, there are around 400 more waiting in Saudi Arabia.

Duterte gave his word that he would help them all get home.