Mary Jane Veloso to President Duterte: Help me get justice 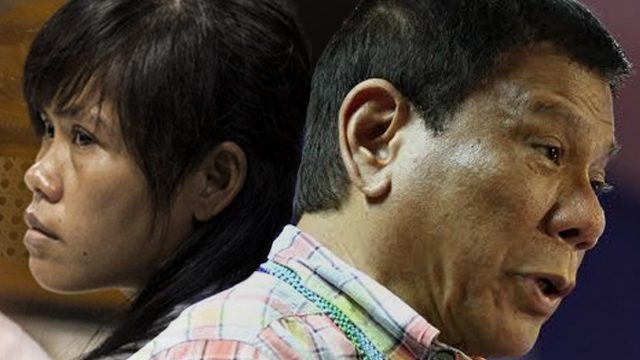 MANILA, Philippines – In an emotional audio recording sent by Migrante International, Mary Jane Veloso, an alleged human trafficking victim detained in Indonesia on charges of drug smuggling, appealed to President Rodrigo Duterte for help in “getting justice.” (READ: The story of Mary Jane Veloso, in her own words)

Her message was recorded during a phone call to her family on July 31.

Mary Jane, whose story moved the nation when she was put on death row and given a last-minute reprieve last year, repeatedly claimed innocence in her appeal.

(I’ve been suffering for so long here in Indonesia, suffering even though I am innocent. You are my only hope.)

Mary Jane said in Filipino that she is “ready to be executed” but is “hurt by the fact that she’s innocent” and that “she has children who are still very young.”

(I’ve been in Indonesia for almost 7 years now and I still haven’t been given justice. That’s all I ask from you – give me justice.)

Read the transcript of her audio recording, as transcribed by her sister Maritess, here:

President Duterte is set to go to Indonesia from September 8 to 9, after the Association of Southeast Asian Nations (ASEAN) Summit and related summits in Laos.

Presidential Spokesman Ernesto Abella on Thursday, September 1, said in response to questions that Duterte may visit Mary Jane “given the opportunity.” – Rappler.com