Sep 26, 2016 2:53 PM PHT
Rappler.com
Facebook Twitter Copy URL
Copied
The public is invited to join the #Pagyanig Challenge and show how we can all be prepared for the 'Big One' 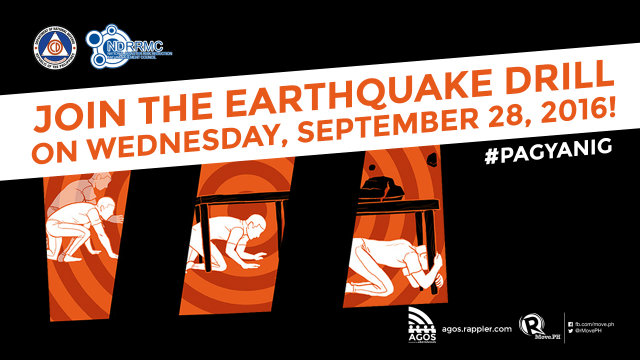 MANILA, Philippines – How prepared is the country for a powerful earthquake?

This is the question which the Nationwide Simultaneous Earthquake Drill (NSED), dubbed online as #Pagyanig, seeks to answer on Wednesday, September 28.

The ceremonial venue of the third quarter nationwide earthquake drill this year is the Juana Village, Brgy San Francisco, Biñan City, Laguna. Local drills will be simultaneously conducted in the rest of the country through the regional disaster risk reduction management councils.

The drill is based on a 7.2-magnitude earthquake caused by the movement of the West Valley Fault. According to the Metro Manila Earthquake Impact Reduction Study (MMEIRS), a powerful earthquake could cause widespread destruction in  Metro Manila and nearby provinces.

In the event of an actual crisis, those affected should be prepared to survive without external help for at least 72 hours. After all, the country is no stranger to natural calamities. (READ: Preparing your family for an earthquake)

(We know the dangers that a strong earthquake can cause to the lives, property, and livelihood of the Filipino people.)

The law mandates local governments as the primary responders in any disaster scenario. Should Metro Manila be incapable of taking care of itself, neighboring LGUs from Laguna, Bulacan, and Rizal will need to come in and help evacuees and survivors. This iteration of the drill will test how a local government outside of Metro Manila will respond to a large quake. (READ: The role of LGUs, local councils during disasters)

As with every national earthquake drill, Rappler and the Office of Civil Defense carry out a social media campaign to raise awareness on what to do before, during, and after an earthquake.

The public is invited to join the #Pagyanig Challenge and show how we can all be prepared for the ‘Big One’. Here’s how to join on the day of the earthquake drill:

1. Do the duck, cover, and hold technique

2. Take photos/videos of your #Pagyanig experience

Want to know how to prepare for a major earthquake? Here’s a page where you can watch videos, read guides, and learn more about quakes.