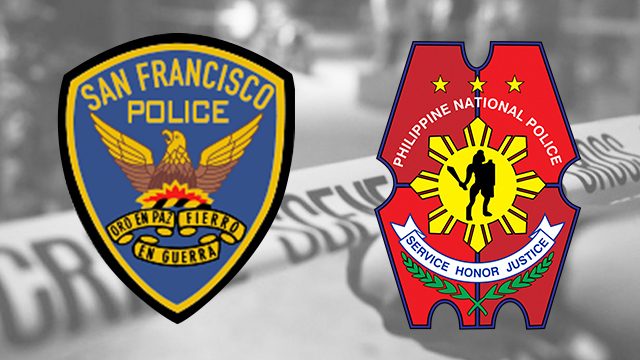 CEBU CITY, Philippines – After 16 years, police agencies in the San Francisco Bay Area are ending their training program with the Philippine National Police (PNP). This was due to concerns over the war on drugs.

“Our nation [the Philippines] is in turmoil and trouble and it just gets worse and worse. Economically, because of this controversy, it affects every segment of making us a better nation and better people,” Retired Filipino American Police Lieutenant Eric Quema told local San Francisco CBS affiliate KPIX.

The San Francisco Police Department (SFPD) said in a statement that they decided to end the program because of “concerns of allegations of civil rights violations in the Philippines.”

President Rodrigo Duterte has been making good on his campaign promise to wage a war on illegal drugs. Since his term began, there have been more than 3,500 people killed, and convinced over 700,000 drug users and pushers to surrender.

Over 1,100 of those deaths so far are suspects killed in legitimate police operations, while the rest were killed by unknown assailants.

According to the PNP’s numbers, around 20,000 have been arrested nationwide due to drug charges.

The program began in 1999 and was organized by the Filipino-American Law Enforcement Officers Association (FALEO).

In addition to equipment, enforcement and rescue training, the program consists of lectures, dialogues and turnover of new and second-hand equipment to the PNP.

In 2010, members of the Bay Area Rapid Transit Police, the California Department of Justice/Bureau of Narcotic Enforcement and the San Francisco District Attorney’s Investigation Brueau joined the exchange program.

About 1.5 million Filipino immigrants and Filipino Americans live in California, of which, 380,000 are in the San Francisco Bay Area.

Duterte won 45% of the 14,000 votes cast at the San Francisco Consulate, which covers overseas absentee voters living in the western United States, last May.

Aside from extrajudicial killings, Duterte has also been criticized for ordering police to “shoot to kill” suspected drug pushers. (READ: Shoot to kill? Duterte’s statements on killing drug users)

Police departments in the United States have also been accused of using excessive force. According to The Guardian’s “The Count,” 1,146 civilians were killed by police in 2015, while 873 have been killed in 2016. Many of those killed are ethnic minorities.

In contrast with Duterte, US President Barack Obama condemned killing of civillians by American police officers. He was quoted by ABC News last July, “All of us Americans should be troubled by these shootings. These are not isolated incidents, they are symptomatic of a broader set of racial disparities that exist in our criminal justice system.”

The Philippines’ war on drugs has caused a rift between the longtime allies after the US expressed concern over extrajudicial killings in the Philippines. (READ: US releases a rare list of concerns under Duterte)

During a recent trip to Beijing, Duterte announced an ‘economic and military’ separation from the US, but clarified that he was not ‘severing’ diplomatic ties. – Rappler.com