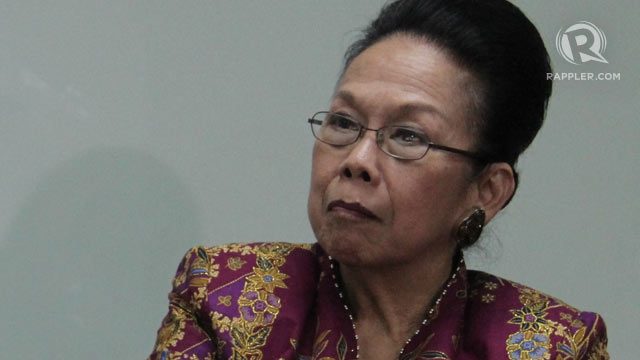 Facebook Twitter Copy URL
Copied
'We find at CHED that more people want the diploma from college, when maybe it is better for them to go to TESDA to take vocational courses. We are trying to change that mindset,' says CHED chairperson Patricia Licuanan

According to Licuanan, even though K to12 has already been implemented, data still showed that one of the main priorities of Filipino families is to send their children to college.

“Ever since, that has been the saying, the truism that they will sell their last carabao so their child will go to school. We find at CHED that more people want the diploma from college, when maybe it is better for them to go to TESDA (Technical Education and Skills Development Authority) to take vocational courses,” she said.

“We are trying to change that mindset. In fact, it is really a good job. If you get through skills training, then go for it. It’s okay. Alisin na natin ‘yung status ng college education (Let’s remove the status of college education),” Licuanan added.

She said that she has been “criticized” for taking such a position.

“But it is because we value the middle-level skills training. Schools come [to CHED] and they have ideas like they will open this course, this [Bachelor of Science] BS course. We now always ask why? Can these skills not be offered again through middle-level training? Why do you have to open a BS course?” Licuanan added.

Licuanan also called out businesses and employers who require college degrees for jobs that don’t need such requirements.

“The other campaign is also the employers. There is ‘credentials inflation’ wherein employers will ask for college degrees when the job does not call for it. That is wrong, so we are now going on this kind of crusade,” Licuanan said.

The K to 12 program, which added two more years to basic education, provides different tracks to specialize on, among them the “technical-vocational-livelihood (TVL) track.” This is seen to boost the country’s employment.

According to TESDA chief Guiling Mamondiong, TESDA has taken steps to make sure that senior high school graduates will have job opportunities.

“We are closely coordinating with the industry to address mismatch. Meaning, if we have to produce skilled workers, it is because the industry needs it,” he said.

Among the major job generators in the country are construction, tourism, information and communications technology (ICT), and agri-fisheries, he said.

While he revealed the TESDA’s training centers at the summit, Mamondiong said that it would be difficult for the country to be competitive. (READ: TESDA Chief: PH training centers need repairs, new equipment)

“I pity TESDA. I will not stay here for so long. What is TESDA now? I have been in almost all regions of the country. What I have seen are dilapidated TESDA training centers. How can we be competitive globally when our own training centers are not competitive?” he said in a mix of English and Filipino.

He also said that TESDA’s proposed 2017 budget of P6.9 billion ($142 million) is not enough because of the thousands of students the agency has to serve. – Rappler.com