DFA: No ‘calamitous impact’ on Filipino migrants in US despite Trump win 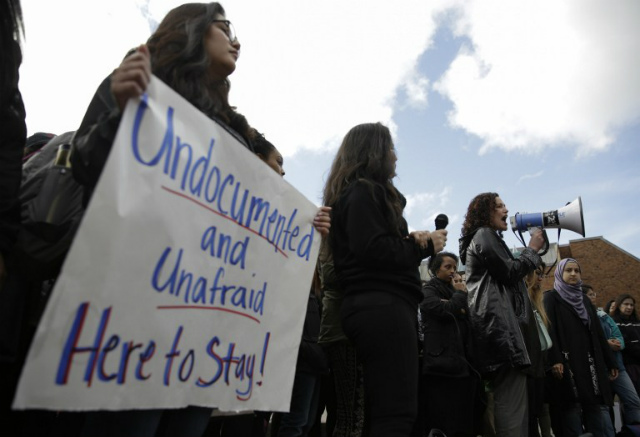 MANILA, Philippines (UPDATED) – The Philippines sought to quell fears of its citizens after US President-elect Donald Trump threatened to deport up to 3 million undocumented migrants from the US, home to more than 3 million Filipinos abroad.

“We presently do not expect President-elect Trump’s immigration pronouncements to have a calamitous impact on the Filipino community there,” Philippine Department of Foreign Affairs (DFA) spokesman Charles Jose said Monday evening, November 14.

Jose explained that for years, the US has deported illegal immigrants “in a timely and orderly fashion.”

Deported immigrants, he pointed out, “have occasionally included Filipinos arrested because of immigration irregularities and criminal violations.”

“Nevertheless, a vast majority of the 3 million Filipinos residing in the US have legal residency or citizenship status, pay their taxes, and generally obey American laws,” Jose said. (READ: 5 ways a Trump presidency could affect Filipinos)

Rise in racism, too

The Commission on Filipinos Overseas (CFO) estimates that 3.5 million Filipinos live in the US as of December 2013.

The CFO classifies 271,000 Filipino workers in the US as irregular or undocumented.

Undocumented Filipino workers comprise around 7.6% of the total number of Filipinos in the US.

The DFA issued Monday’s comment after Trump, in an interview aired on Sunday, November 13, said he will keep his vow to deport millions of undocumented migrants from the US.

“What we are going to do is get the people that are criminal and have criminal records, gang members, drug dealers, where a lot of these people, probably 2 million, it could be even 3 million – we are getting them out of our country or we are going to incarcerate,” Trump said on CBS’s 60 Minutes program.

While Trump has not taken office, however, minorities and civil rights groups have begun to worry that Trump’s election has led to a surge in reports of racist incidents. – with reports from Agence France-Presse/Rappler.com