Nov 18, 2016 7:24 PM PHT
David Lozada
Facebook Twitter Copy URL
Copied
In a historic move, students and faculty members of the 3 schools come together to show their indignation toward the fallen dictator 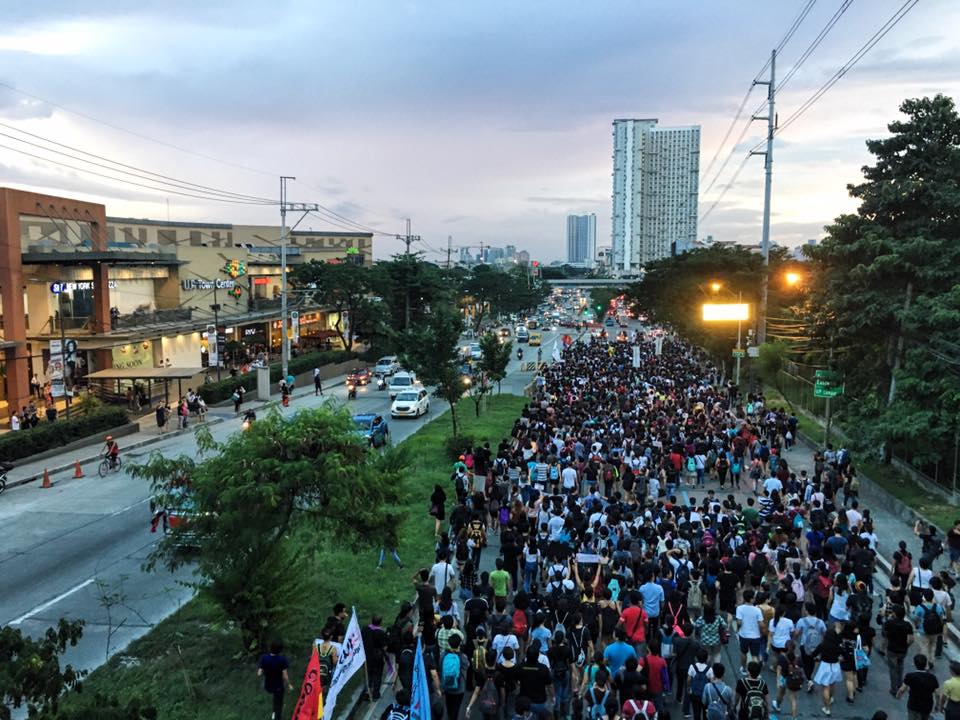 MANILA, Philippines – The University of the Philippines, the Ateneo de Manila University, and Miriam College are making a statement: “Marcos is not a hero.”

Before meeting up with other schools, UP students held a small program in Palma Hall to express their rage against the secret burial.

University Student Councilor Ben Galil Te asked the crowd if they had already forgotten about all the injustices that happened during Martial Law.

Te pointed out that burying Marcos smacks of historical revisionism and forgets those people who suffered during Martial Law.

“Hindi lamang ito paglimot sa kasyasayan kundi pagtalikod sa mga nagbuwis ng kanilang buhay para sa ating kalayaan,” he added. (It is not only about forgetting our history but also turning our back to those who gave their lives for our freedom.) 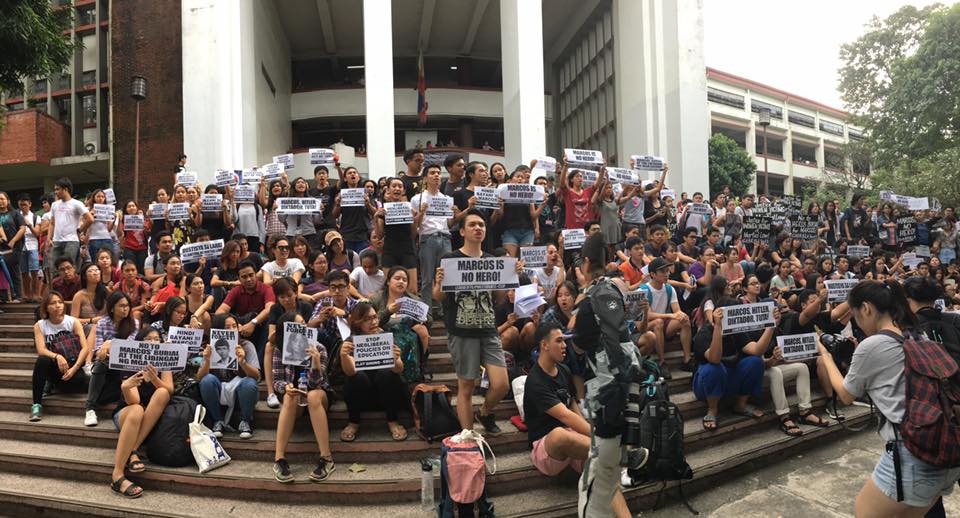 The group initially wanted to proceed to the EDSA People Power Monument but decided to meet with the other schools instead. Around 500 protesters proceeded to Miriam College for the multisectoral protest.

As part of the mourning for the clandestine burial, the Carillon, UP’s iconic bell tower, played Bayan Ko – one of the theme songs of the Martial Law period – and it will play the tune until midnight.

Ateneo de Manila University’s student government, meanwhile, encouraged students to cut their classes to join the protests – with many faculty members agreeing to the call.

The Sanggunian is encouraging you to use your cuts for the country.

The community held a noise barrage along Katipunan as early as 1 pm. The university also covered its fences in black cloth to show its dissent against the burial.

Ateneans gather along Katipunan Road to protest the burial of the former dictator at Libingan ng mga Bayani. #Marcosisnotahero. pic.twitter.com/uYZ2kLdkPS

ADMU and UP converged in front of Miriam College to show solidarity in an indignation protest. During the short program, various sectoral representatives spoke against Marcos. The protesters chanted “Marcos is not a hero!” and “Hukayin si Marcos, ibalik sa Ilocos!” among others.

Prayers were also said as candles were lit to remember the victims of Martial Law.

Students from UP Diliman have now arrived at Miriam College to join the crowd. | via @RegisAndanar pic.twitter.com/nvU3lXjENu

The protests in the Katipunan schools were among the hundreds of other protests that sprung across the country because of the sudden burial. – With a report from Norai Sales / Rappler.com