Which countries pay OFWs the highest? 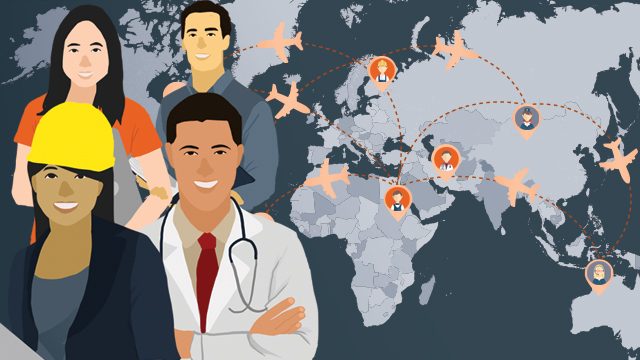 Facebook Twitter Copy URL
Copied
Here are the top paying countries and most in-demand jobs abroad, according to the workabroad.ph's 2016 Overseas Report

From being the top paying country in 2015, the US didn’t make it to the top 10 this year with demand for healthcare workers declining, said Workabroad.ph Business Unit Manager Rhea Suiza.

Here are the highest paying countries of deployment (monthly rates): In terms of specialization, OFWs in the healthcare (doctor/diagnosis) industry, specifically pediatricians and gynecologists, earn the highest, with an average salary of P111,620 ($2,239.24).

Healthcare (doctor/diagnosis) is also the highest paying specialization among junior executives, or those with 1 to 4 years of experience.

For supervisors, those with jobs on the Aviation/Aircraft Maintenance Industry are paid the highest, with Heliport Schedulers earning as much as P209,700 ($4,207.55) per month.

Those in the agriculture, forestry, or fisheries industry meanwhile are the top earners among managers, with an average monthly salary of P129,375 ($2,594.77). Despite the oil crisis, Saudi Arabia retains its position as the top destination for OFWs in 2016, having posted 46,026 jobs, or a 39% contribution to the total jobs posted on workabroad.ph from January to September 2016.

POEA Director Robert Larga said that while several industries have been affected by the crisis, the volume of demand and job orders remain high for Saudi Arabia and other gulf countries.

Suiza said the crisis affects mainly the government sector in Saudi Arabia, but there is still a lot of job postings for Filipino workers from private companies. Here are the 10 most in-demand job specializations: According to Workabroad.ph, the report aims to guide aspiring Filipino workers looking to pursue overseas job opportunities to help them understand how competitive the global field is today.

POEA’s Market Promotions Division Chief Rachel Angeles said that about 4,800 OFWs are deployed every day. Their remittances significantly contribute to the country’s reserves, with OFWs remitting US $14.6 billion (P728 billion) in the first 6 months of 2016 alone. – Rappler.com