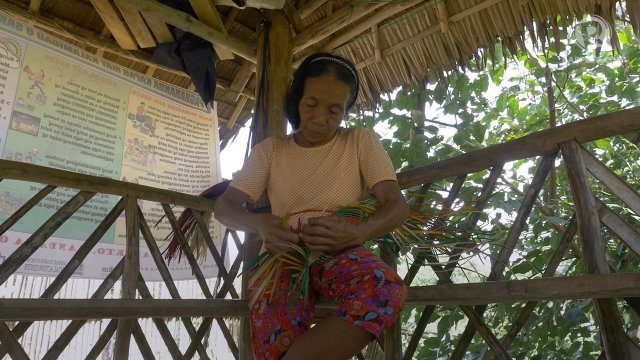 The proliferation of plasticware during the 90s, however, led to the industry’s demise.

According to the National Statistics Coordination Board, Busuanga remains one of the poorest municipalities in the Philippines. The situation turned for the worse after Super Typhoon Yolanda (international name Haiyan) devastated the area.

Caritas Philippines launched a livelihood development program through the #REACHPhilippines project, which includes the revival of the bamboo weaving industry.

Among the beneficiaries is 64-year-old Andresa Daco who started weaving in 1975.

Now she shares her skills with the younger generation.

(I force myself to learn because that’s wht I can share with other people and my children. So that when I am old already, they will remember that I did something good. I didn’t have proper education. This is the only thing I can pass on to them, to my children.)

Aside from lending them capital, Caritas Philippines also started a product development training for the weavers in November as part of the commemorative anniversary of Super Typhoon Yolanda.

The Bambuhay shop was put up in Coron where they can better market their products to tourists.

“The bamboo weaving industry almost died but now it’s part of the community’s recovery. We needed to bring back the means of livelihood that they already know how to do,” said Father Edu Gariguez, NASSA/Caritas Philippine Executive Secretary. – Rappler.com