WATCH: Duterte: Say ‘No’ to corruption 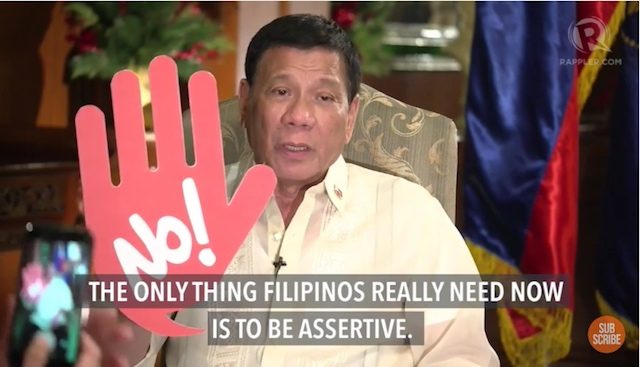 MANILA, Philippines – President Rodrigo Duterte promised change was coming when he won the presidency last year, and one of his campaign promises was to rid the government of corruption.

Corruption has a very real impact on Filipinos: various studies have shown that poverty exists partly because of corruption, and billions of pesos that could’ve gone to much-needed social services end up in the pockets of corrupt officials engaged in illicit activities. (IN NUMBERS: Impact of corruption on the Philippines)

The tough-talking former mayor of Davao City has vowed to impose his iron-fisted way of ruling to wage a war against corruption – but, he acknowledges, it’s a fight he can’t win alone.

“One of the promises I made to the people is I will stop corruption in government. I cannot do it alone. You have to be aware of what I’m doing and you have to help me,” he said.

Ordinary Filipinos can do their share in the fight against corruption by standing up to incidents of bribery and asserting their rights, Duterte said.

Duterte’s advice: If a police officer attempts to extort you, raise a howl, create a scene, let him know he’s committing a crime, and warn him that the President will not go easy on him.

Duterte called on Filipinos to be assertive and stand their ground, because corruption will stay pervasive if Filipinos are not vigilant or brave enough to fight back.

“Unless people really realize that they have rights, and that you have every right to your money, every centavo of it, unless you begin to be brave: ‘Ayaw ko ‘yan. Wag mo akong hingan,'” he said.

Will you be heeding the President’s call? Share your stories and tell us about your experience on www.fightcorruption.ph or chat with us through Facebook messenger. – Rappler.com