Jan 21, 2017 11:33 PM PHT
Santiago J. Arnaiz
Facebook Twitter Copy URL
Copied
Bleak as it may seem for many Filipinos living in America, there is a spirit of defiance among protesters – one fueled by hope 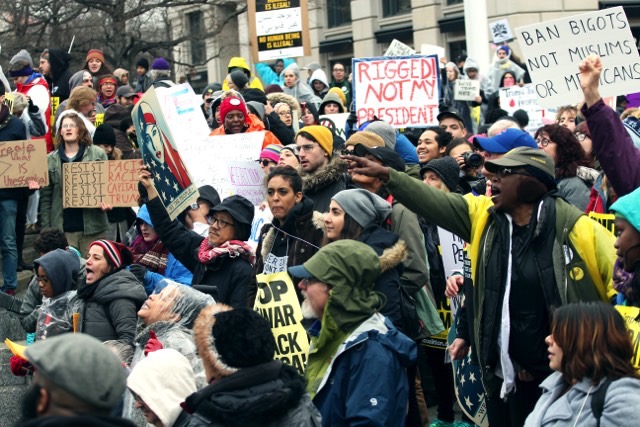 WASHINGTON D.C., USA – Jade Palma Gil stood in line for over 4 hours Friday, January 20, waiting to join what is being called the Anti-Inauguration of US President Donald Trump.

Secret Service had been routinely shutting down security checkpoints all morning in the hopes of throttling the influx of protestors into the inaugural grounds. By the time Gil and the other members of Damayan finally joined the demonstration along Pennsylvania Avenue, the ceremony had already begun.

Though the crowds watching their new president being sworn into office at Capitol Hill were sparse, the outer streets of Washington DC were flooded with thousands of protestors all over the city.

Gil is the community organizer of the Damayan Migrant Workers Association, a grassroots Filipino community group based in New York City. He was part of a contingent from Damayan that came to DC to join “Inaugurate the Resistance”, a demonstration organized by the ANSWER Coalition, pulling together dozens of local and national advocacy groups from all over the country.

Amid fears of what the next 4 years have in store for minority groups in America, these demonstrators set out to make it clear they would not welcome Trump’s administration in silence. Damayan, as well as other organizations like Gabriela USA, were there to ensure that the voice of dissenting Filipino-Americans was heard.

Gil believes the biggest issue the community faces right now is the deportation of undocumented Filipinos in the country. Though it’s difficult to pin down how many Filipinos are living and working in the United States without documentation, the most recent census data estimates their numbers in the millions.

He remembers the Damayan hotline ringing off the hook with calls from members terrified about what would happen to them and their families now that Donald Trump would be their leader.

Trump ran on a campaign of deportation and isolation, at one point labelling the Philippines a terrorist nation. Gil said that, instead of providing immigration support, the Philippine embassies responded by simply advising Filipinos to go back to the Philippines before Trump enters office.

“It’s a disaster,” said Joe Castro, a retired North Carolina native who emigrated from Manila in 1988. Castro is concerned about Trump’s stance on immigration and what it means for Filipino-Americans applying for citizenship for their families back in the Philippines. He believes the next 4 years will see many Filipinos isolated from home.

“The Fil-Am community, why are we here? Because we thought America would be a place where we can fit in. Democracy, freedom of speech, freedom of religion – everything we believed in, Trump has trampled [on].”

Zarah Vinola, the secretary of community affairs at the National Alliance for Filipino Concerns (Nafcon), expressed the same concern over the future of the community.

“Filipinos are in danger of deportation, criminalization and heightening racism,” she said.

“Even prior to Trump’s presidency, Filipino workers have experienced trafficking, wage theft, and discrimination. A Trump presidency headed by a man who called Filipinos ‘animals’, who are from a ‘terrorist nation’, will worsen these conditions for Filipinos and other immigrant communities in the US.”

But the Filipino-American community’s concerns aren’t limited to increasing racial tensions and immigration issues alone. According to Danica Pagulayan, chairperson of Filipino-American youth organization Anakbayan New York, one of their biggest problems is the rising cost of education.

Pagulayan expressed dismay over Trump’s nomination of Betsy DeVos as Secretary of Education, describing her as an out of touch multi-billionaire with no direct experience in federal financial aid or taking out loans to pay for education.

Citing a long history of lawmakers prioritizing military funding over education, she believes that this will only worsen over the next 4 years.

“The election of Trump has proven that elections don’t bring about changes we want to see,” Pagulayan said. “We in Anakbayan are calling for youth to channel their anger towards organizing and collective action.”

Potri Ranka Manis, a Nafcon member and artist activist who immigrated to the US in 1990 said the new administration brings a specter of gloom and fear to people of color. As a registered nurse, she fears this new administration will push through with its plans to repeal the Affordable Care Act, commonly referred to as Obamacare.

“A government that cares for the health and education of its people leads a happy country,” she said. “But if the government serves the interest of pharmaceutical industries making health a commodity, then this is the worst capitalist system. This is the bleak picture of what will become of the United States in the hands of a big time businessman owning big time corporations.”

Bleak as it may seem for many Filipinos living in America, there was a spirit of defiance among protesters gathered along Pennyslvania Avenue – one fueled by hope.

As Trump delivered his inaugural message, the crowd drowned him out with their own.  “Every decision on trade, on taxes, on immigration, on foreign affairs, will be made to benefit American workers and American families,” he said. “From this moment on, it’s going to be America First.”

Gil, the other members of Damayan, and the rest of the congregation responded with a message of their own, chanting “Sí, Se Puede!” – the official slogan of the immigration reform protest of 2006.

Santiago Arnaiz is a freelance journalist and a student at the Columbia University Graduate School of Journalism in New York, USA.