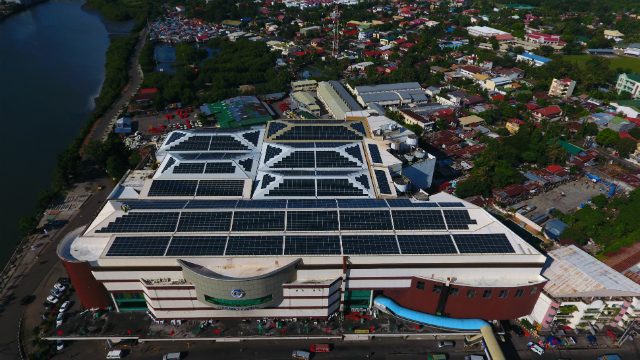 Increased economic activities in the city are projected to create more demand for power. But issues raised against the cost of power and the environmental impact of coal power plants are seen to hamper the crucial delivery of power requirements in the region.

Iloilo city officials, led by Mayor Jed Patrick Mabilog, welcomed the move in view of the increasing demand for cheaper power sources, It also in line with the city’s commitment for more environment-friendly establishments in the fast-growing business capital in the Visayas.

Robinson’s Iloilo converted its rooftop into a solar plant with 2,404 pieces of solar panels, making it one of the biggest grid-tied photovoltaic (PV) installation in the city. RLC General manager for Corporate Energy Cesar Camaongay said such projects respond to concerns over the high cost of power in the region, and complements RLC’s promotion for renewable energy sources.

While offsetting peak loads during the day, the added layer of solar panels on the roof will also improve the malls’ cooling load. The system is expected to generate savings of around P1 million ($20,000) a month.

This is the second RLC mall, after Robinson’s Place Palawan, to convert to solar energy. Similar projects are in place in other Robinson’s malls in Antique, Roxas, and Dumaguete.

Gaisano Capital, in partnership with Lopez-led Energy Development Corporation, unveiled the largest solar rooftop system in the province in its mall in La Paz District, Iloilo City, in January 2017.

The mall is now equipped with a 1.03-MW solar rooftop system that can supply up to 50% of the mall’s daytime load.

“The solar rooftop systems have come down in price and will continue to do so. We will harness solar so we can provide cleaner and more affordable energy options to our customers. Both the customers and environment win so it’s a business we are committed to,” EDC President and COO Richard Tantoco said.

As the system does not use fossil fuels, it will help cut carbon dioxide emissions by around 770 metric tons annually.

“We are happy to see the completion of our largest solar rooftop project and provide added value to our La Paz customers. We are one with EDC in promoting the use of and enhancing our operations with cleaner energy technologies. This is our own contribution to reduce the negative impacts of climate change,” said Gaisano Capital Vice President for Operations Edmund Gaisano Jr.

EDC and Gaisano Capital have finalized agreements for the installation of similar solar rooftop systems in the latter’s 5 other malls in Panay island.

The first-ever solar power plant in the entire Panay and Guimaras Island was inaugurated in Miag-ao town in Iloilo, in September 2016.

Located in Barangay Naratan-an, around 7 kilometers from the town proper,  the solar plant can deliver up to 5.67 MW of renewable energy.

Cosmo Solar Energy Incorporated plans to expand the plant, currently on a 15-hectare lot, to an additional 15 hectares, which would increase its capacity to 10 MW.

A wind farm is also being built in neighboring Guimaras province that is said to be capable of generating 54 MW of wind energy. Led by Tran-Asia Power Generation Corporation, a total of 27 windmills are currently found in the town of San Lorenzo – each with a capacity of generating up to 20 MW.

Some 23 more windmills are expected to be constructed in the towns of Sibunag and Nue Valencia this year.

These initiatives will be fully operational this 2017 and are expected to help answer the call for alternative energy sources amid the growing power needs of the region. – Rappler.com

Russel Patina is one of Rappler’s lead Movers in Iloilo.

Editor’s note: A previous version erroneously reported the rooftop system as a 103 MW system. We corrected this error.