#InspireCourage: Polio not an obstacle to work in vulcanizing shop 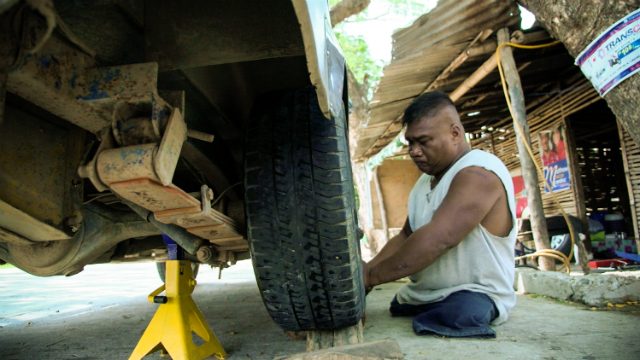 Facebook Twitter Copy URL
Copied
Despite having no legs, Warlito Tumpap works tirelessly at a vulcanizing shop to make ends meet for his family and send his children to school

LAOAG CITY, Philippines – All kinds of vehicles – trucks, private cars, and jeepneys – pass through the busy Doña Josefa Llanes Escoda National Highway in the sleepy town of Dingras, Ilocos Norte. It is a major thoroughfare for tourists traveling to the north and businesses transporting goods across the different towns of the province.

On Monday, March 20, the owner of the vulcanizing shop was fixing a flat tire of an owner type jeep. He was using an improvised jack made out of plywood. It was a rather slow day, he said.

Warlito Tumpap or “Tatay Amboy”, as people fondly call him, is unlike any other mechanic who does vulcanizing. Tumpap does not have legs. He lost them to polio when he was still a child.

(I was born normal. But when I was 3 years old, I got sick. It continued until I contracted polio and lost my feet.)

Plight of the PWDs

Fortunately, he does not allow his disability to limit what he can do for a living. Without an assistant to speak of, Tumpap has been single-handedly running the vulcanizing shop for almost a decade.

Prior to his vulcanizing stint, Tumpap tried his hand in all sorts of livelihood sources available in his community.

(Believe it or not, back when I still did not have a vulcanizing shop, I tried to help harvest rice. When not doing so, I helped in picking corn or harvest other crops in other farmlands. When that did not work, and I was married by then, I looked for crabs or shrimps – anything to earn money.)

The activities available to him back then were more difficult than the vulcanizing work, Tumpap said. This is since they required maximum mobility from him.

Like many others like him, Tumpap had a hard time looking for a stable source of livelihood because of his disability.

In the Philippines, 16 out of a thousand people have a disability, based on the 2010 national census. According to the 2013 study conducted by the Philippine Institute for Development Studies, a majority of persons with disability (PWDs) in both rural and urban areas are considered engaged in “vulnerable employment” without formal or stable jobs.

Staying true to Tumpap’s story, the study showed that most of the working PWDs are either self-employed or unpaid family workers.

(I piled scraps of galvanized iron sheets. I used it to have a roof over our heads. I was still staying with my sister then. My son, he was still in Grade 2 back then, helped me. He would haul the compressor I used for vulcanizing.)

Tumpap works tirelessly every day. This was attested to by Warlita Abalos, his partner of more than 15 years. Abalos, whose first name uncannily resembles Tumpap’s, also contracted polio as a child. She has difficulty walking.

(My husband is really very hardworking. As long as he is able to, he would really work hard. Even though the job is challenging, for the sake of our children, he does not get tired vulcanizing for a living.)

In his years of working along the highway, he has met all kinds of customers. He said they can be usually categorized into two: the kind and the rude ones.

Tumpap has already lost count of how many customers refused to pay him his due after fixing their tires. He, however, does not let this dampen his resolve to continue making a living.

On a normal day, he would earn around P250-P300. This measly amount is distributed to cover their family’s day-to-day expenses, including their meals, toiletries, electricity, and the children’s money for school.

What does he do during those days when he earns nothing from vulcanizing? “Wala. Tunganga na lang,” he said, jokingly. (Nothing. I just stare blankly.)

(If I fail to earn money today, I would look for friends who would lend me money so I can send my kids with some money to school. I don’t want them to miss a single day at school.)

He is referring to his two children – Rowena and Benedicto Tumpap – who are grades 11 and 6, respectively.

Tumpap’s dream for his kids is nothing but easy: he wants them to finish college. This is the reason why he works hard day and night to provide for their education.

(He wants to be a mechanic. He said: “When I finish school, I will go abroad and buy big tools. And then I will build a shop here.”)

The kids are also the reason why Tumpap never says no to any of his clients, no matter how difficult the task is.

Once, a 10-wheeler truck broke down in Ilocos Norte. It was turned down by 3 vulcanizing shops before it reached Tumpap’s stall. Alone but determined to finish the job, Tumpap recalled he took 4 hours fixing the truck’s tires.

(Even though it is already late at night, I would rise from bed if a customer comes knocking. I will work for a P20-service so my children have money or food for school for the next day.)

Tumpap is proof that there are no limits to what PWDs can do.

(Even though I have a disability, in my mind, I don’t dwell on my handicap even if I am handicapped. That’s why I am thankful to those who admire the work of the disabled like me.)  – Rappler.com

At Rappler, we believe there are many freedoms: to speak, to choose, to love, or just to be. #InspireCourage is our campaign to encourage people to speak up, engage in issues, and continue fighting for the change they want to see. Be part of the conversation.