The stuff topnotchers are made of

Feb 22, 2012 8:05 PM PHT
John Kenneth E. Ching
Facebook Twitter Copy URL
Copied
'I went to review class, studied after class and slept late because I was answering at least 100 questions a day to help me prepare for the board exam.' 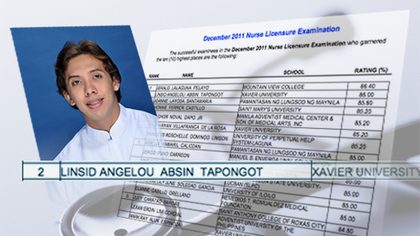 CAGAYAN DE ORO, Philippines – He is not the stereotypical topnotcher. He is described as a happy-go-lucky guy. He goes to the gym regularly, and even attends the weekly Trivia Night in a well-known café in Cagayan de Oro City.

He plays video games and is an avid comic book reader. He also has an extraordinary name: Linsid Angelou Tapongot.

He graduated with a nursing degree after spending 6 years in Xavier University-Ateneo de Cagayan (XU). On the Board exam days, he came with a chip-on-the-shoulder mindset.

“I felt that I really had to prove something. That I needed to do well in the exam, but not that I needed to top it,” Linsid said, describing his frame of mind when he took the Nursing board exams on December 18 and Dec 19, 2011.

Despite the odds, he was among the 22,760 who passed the board. He took the second spot with a score of 86%, 40 percentage points behind board No. 1-placer Jerald Pelayo of Mountain View College of Valencia City, Bukidnon.

No, it’s not about Jeremy Lin, though the comparisons do not stop only at their nominal proximity.

“I guess people compare me to him because only a few people believed in me. In our batch, there were really more students who they thought could top the board exam,” Linsid said as he took the comparisons to Linsanity in context.

Maybe these doubts were well-founded but he brushed them aside. “I showed them that even if the odds are against me, if I just came prepared and did my best, then I would have a chance to do well and top the board exam. Magis lang jud (It’s Magis),” referring to the Atenean value that literally means “more.”

In the afternoon of February 16, he was in a mall when he received the news of his achievement from a friend who called him. Sensing that the news was too good to be true, he dismissed the call as a prank.

Then he received more congratulatory calls. Though he had his doubts, Linsid became more intrigued by each succeeding call. He consulted his mother, who advised him to check out the results for himself.

“We got home at around 7 pm, and it was only then that I really confirmed the result,” he recounts.

That night, his Facebook page was bombarded with greetings from friends and well-wishers eager to express their amazement and happiness for his feat.

Prepping up the board

He believes that preparation is tantamount to success. “I went to review class, studied after class and slept late because I was answering at least 100 questions a day to help me prepare for the board exam.”

He plans to enroll in XU’s Dr. Jose P. Rizal School of Medicine. “All the others are just too far. I wouldn’t want to waste money for board and lodging. And of course, XU Med School’s performance is at par with all the other top-performing med schools in the Philippines.”

Aside from his achievement, the fact that 10 of his batch mates are top notchers give him a source of pride. This is the most that any school sent into the Top 10 this year.

“XU only had at least one or two top notchers per exam… I’m really very proud and happy that I lead these 10 topnotchers to a place in nursing board exam, and of course in XU’s already glowing history,” he says. – Rappler.com