Jul 13, 2017 6:55 PM PHT
Cielo Marie Esmeria
Facebook Twitter Copy URL
Copied
While Hopeline says callers may experience a busy line during peak hours, it clarifies that the hotline is 24/7 and that responders are well-trained 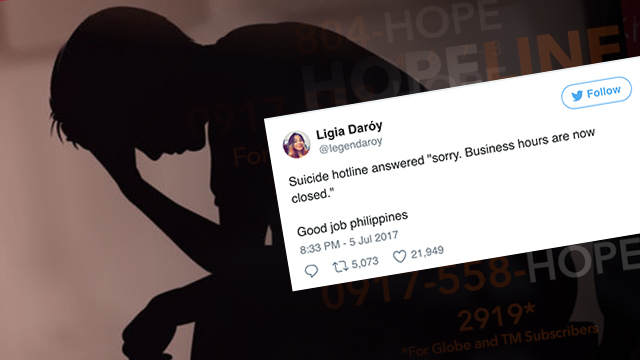 MANILA, Philippines – Hopeline, the national support hotline for depression and suicide prevention, is being criticized online for alleged inaccessibility.

A viral Twitter post by user Ligia Daroy claimed the hotline, which is supposed to be 24/7, reportedly stopped taking calls after “business hours.” Daroy’s tweet has been retweeted more than 5,000 times and gotten nearly 22,000 likes since it was posted last July 5.

The Department of Health (DOH) had launched the crisis support hotline in September 2016 in partnership with the Natasha Goulbourn Foundation (NGF).

According to Daroy, she called the hotline around 8 pm on July 5 but got an automated voice message saying, “Sorry. Business hours are only from 6 am to 8 pm.”

“I was depressed. I thought all of my friends are tired of listening to me so I called Hopeline. Then I got, ‘Sorry. Business hours are only from 6 am to 8 pm,'” she told Rappler.

“What if it was someone who was actually ready to jump off a building, tapos ganoon ‘yung maririnig mo (then you will hear something like that)?” she added. (READ: Why we need a mental health law in PH)

Daroy said she didn’t intend for the tweet to go viral but was surprised to get responses from people with similar experiences.

“I didn’t mean to attack them but if it will be addressed it would be really nice,” Daroy said.

Mila Rolinas, Hopeline’s program consultant, said it is very likely that callers will experience a busy line when all lines are taken, especially during peak hours. There are only 12 responders handling calls. (READ: I have depression and it feels good to admit it)

She said there are also times when responders take more than 20 minutes to talk to one caller, especially during high-risk situations. But Rolinas guaranteed that Hopeline is 24/7.

In an Inquirer report, NGF said Hopeline experienced technical issues but these have since been addressed by Globe Telecom.

Vicente also denies Hopeline responders would answer in an apathetic manner. (READ: Ubial: Don’t be indifferent to people with depression)

Vicente said Hopeline responders are well-trained individuals whose areas of expertise are in the behavioral sciences.

Vicente added that Hopeline offers those with depression a way to cope without having to disclose their identity.

“That’s the beauty of the Hopeline. You can call somebody without revealing your identity. Some clients would want to hide their identity, and Hopeline is an alternative to that,” he said. (READ: Keeping the demons at bay: Dealing with depression)

Hopeline currently does not have a formal mechanism to get feedback from callers, or those attempting to call their hotline.

But Rolinas said some callers contact them again to give updates. “‘Yung ibang callers, after going to the mental health professionals, they call para mag-feedback. They update us, saying, ‘Pumunta na po ako dito,'” she said.

(Other callers, after going to mental health professionals, they call to give us feedback. They update us, saying, “I’ve already seen a doctor.”)

Some netizens also suggested the use of online therapy and counseling such as 7 Cups and Koko, if they really cannot contact the suicide hotline.

According to the World Health Organization (WHO), more than 800,000 people die by suicide each year, a number that translates to one death every 40 seconds.

The WHO in 2012 also ranked the Philippines 150th out of 170 countries in terms of suicide rates.

The suicide rate in the country is 2.9 in a population of 100,000 – lower than the annual global-age standardized suicide rate of 11.4.

“I really want people to start talking about it more. I hope they get the message and develop the system better,” said Daroy. – Rappler.com