Rappler Talk: The love-hate relationship between Duterte and the Lumad

Aug 9, 2017 10:08 PM PHT
Rappler.com
Facebook Twitter Copy URL
Copied
Bookmark this page to watch the interview on Wednesday, August 9, as MovePH talks to an indigenous community elder and a student 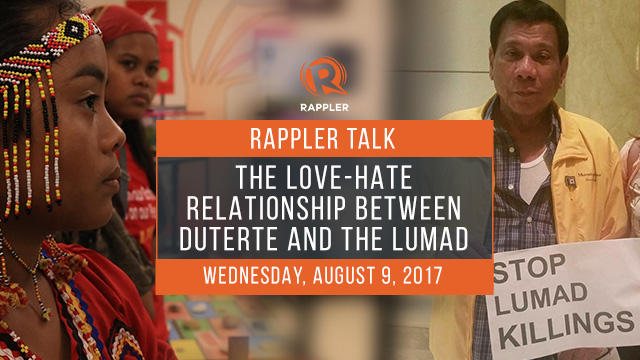 MANILA, Philippines – As mayor of Davao City, President Rodrigo Duterte was a known champion of the Lumad in Mindanao. At the height of alleged harassment and killings of indigenous peoples during the previous administration, Duterte posed for a picture, holding a white paper with the text, “STOP LUMAD KILLINGS.”

However, his tone seemed to have shifted as president, especially in a press conference after his second State of the Nation Address (SONA) last July 24.

The military may have clarified that it will not take as policy Duterte’s threat, but the statement has alarmed indigenous peoples and human rights advocates. (READ: Military won’t bomb Lumad schools – AFP)

Has Duterte turned his back on the Lumad? How do indigenous peoples view the statements and policies of the President concerning them?

On Wednesday night, August 9, International Day of the World’s Indigenous Peoples, MovePH’s Voltaire Tupaz talks to a Lumad elder and a student to discuss their plight under the Duterte administration.

Catch the interview here or via Facebook Live on Rappler’s page. – Rappler.com