Amid malicious messages, organizers gear up for biggest rally on Sept 21 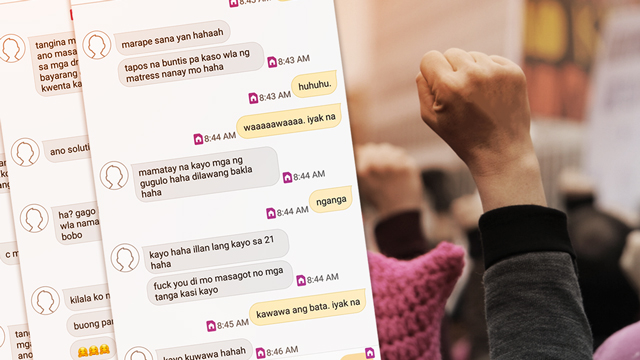 MANILA, Philippines – Organizers of various rallies happening on Thursday September 21, the 45th anniversary of the declaration of martial law, took to social media to show anonymous text messages they received to discredit and discourage support for the scheduled nationwide protest.

In the text messages, the anonymous senders tried to either intimidate the organizers or make it appear that the latter paid people to attend the rally.

De Castro received an anonymous text message asking how much he paid per person attending the rally. He was also sent threatening messages.

“Ang tantiya ko pa, pang-aasar pa ‘yun – na gusto nila palabasin nila na bayaran ang mga tao (My guess is that they are trying to annoy us – they want to make it look like the attendees are paid or hired to join the mobilization),” De Castro said in a phone interview with Rappler.

His message was echoed by Anakbayan National Chairperson Vencer Crisostomo, calling these messages tactics to sabotage the protest and use them as a pretext to impose nationwide martial law.

“Out of desperation, Duterte has taken to mocking the September 21 anti-martial law rally and trivializing the Filipino people’s legitimate grievances,” Crisostomo added.

De Castro is hopeful that the malicious text messages will not discourage people from joining the activities.

The Movement Against Tyranny said it is gearing up for its biggest mobilization against the Duterte administration on Thursday. It expects at least 40,000 attendees from schools, parishes, and other sectors to join the rally in Luneta.

“It will be bigger than the protest [against] the burial of Ferdinand Marcos at the Libingan ng mga Bayani. This will be Duterte’s baptism of fire,” De Castro said in a mix of Filipino and English.

De Castro added that they are aiming for a peacefull rally that sends a clear message. (READ: What to expect on September 21)

De Castro sees no problem with a pro-Duterte rally in Mendiola park simultaneously with the protest of youth groups organized by the Youth Act Now against Tyranny in the same venue.

“We heard na may mga counter-protest, okay lang po sa amin ‘yan. We know na hindi papayag ang publiko na mapigilan sila na magtipon (We heard that there will be a counter-protests. We’re fine with that. We know that the public won’t allow a gathering to be stopped),” De Castro said.

President Rodrigo Duterte suspended government work and classes in public schools on Thursday on the 45th anniversary of the dark chapter in Philippine history, in anticipation of mass protests that day. – Rappler.com