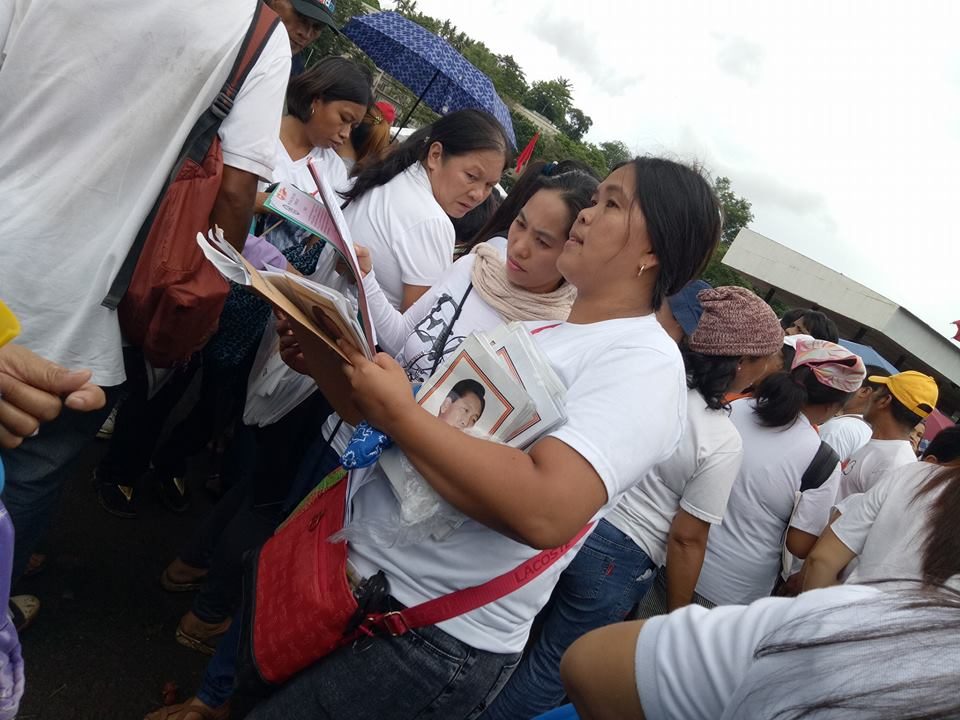 LAGUNA, Philippines (UPDATED) – Thousands of people flocked to the University of the Philippines Los Baños (UPLB) on Saturday, September 23, for “promised cash” from the ill-gotten wealth of the Marcoses.

In interviews with Rappler, attendees said they went to UPLB because they were promised P10,000 monthly from the ill-gotten Marcos wealth. They came from different parts of Calabarzon, Metro Manila, and Marinduque.

“Kung malinis ang puso at isipan ‘nyo, may matatanggap kayong blessing. (If your heart and mind are pure, you will receive blessings),” the organizers said during the program, as the people chant “Mabuhay si Apo! (Long live Apo!)” back at them.

The “blessing” implies that cash “will be given out” to the attendees. The event was organized by One Social Family Credit Cooperative.

Booklets that contain the achievements of former President Ferdinand Marcos were given to members during the event. It was published by Bullion Buyer Ltd.

The organizers said those who have a stamped booklet will be on the “top priority” for cash release. They said it will be sent through their bank accounts.

Membership fee according to interviews were at P10 to P30 per person.

The younger Marcos said he has repeatedly warned the public against gatherings like the one in UPLB, saying these were orchestrated by people for their “personal interests.”

Earlier, in February, residents from Pangasinan were promised P10,000 cash by a man claiming he is an employee of Bullion Buyer Ltd if they purchase booklets with Marcos Sr’s face as cover for P30.

During Martial Law, the Philippines incurred up to $24.4 billion in debt by 1982. (READ: Marcos years marked ‘golden age’ of PH economy? Look at the data)– with reports from Jeremy Jansalin/Rappler.com