CAVITE, Philippines (UPDATED) – If he could do something all his life, it would be to pursue his passion and craft action figures out of scrap.

(If I have a choice, I would craft as many characters as I can until our house is filled.)

The Padilla family recently moved to Imus City in Cavite from Catbalogan City in Samar province to try Elmer’s luck.

Without a peso left in his pockets, Elmer couldn’t buy food for his family nor work on his papers to apply for a job. But luckily, he has samples of his craft.

(I was short of money. I asked where there were many people and was told (to go to) Lotus in Imus. I crafted characters there. I brought samples of my work as display.)

That Sunday afternoon, September 17, Elmer walked about 5 kilometers to reach Lotus Mall and started making figures from the movies Hellboy and Transformers out of flip-flops.

Photos of Elmer’s crafts went around the internet. 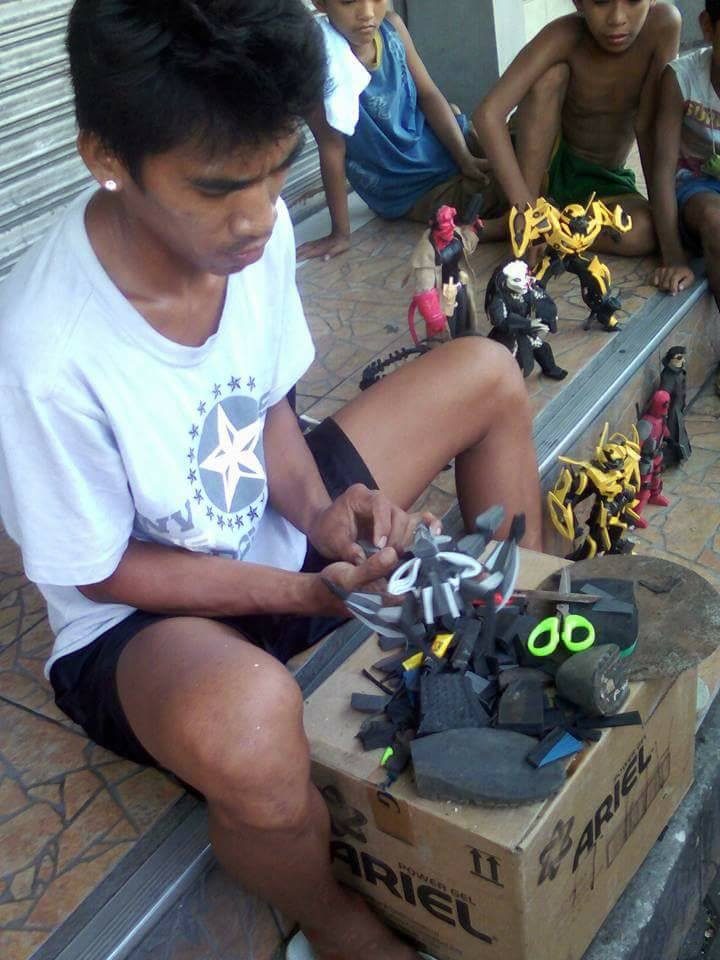 He caught a netizen’s attention and posted his photos on Facebook, and was reposted in several pages – one of which garnered over 41,000 likes and about 17,400 shares.

Elmer said he knew he couldn’t afford buying the expensive action figures he sees at the malls. A Hellboy figure can be priced as much as P4,000 whereas he can create one himself using scrap.

(I can’t afford buying those so I’m just using the talent that I have to craft the character using scrap materials that can still be recycled.)

Elmer said it has always been his dream to be able to craft figures and hopes that one day his earnings will be enough to sustain his family.

He has always been creative as a kid. He started sculpting flip-flops for fun until he was able to master crafting figures from his favorite action movies.

Back in the day, he considers selling his characters at P500 a “lucky day.” On the “unlucky days,” some figures were sold for as low as P100 just to be able to earn money.

Elmer said that he spends a day of work to finish the characters. Those with intricate details take a day or two. When he started, he wasn’t so optimistic about earning with his craft. Back in Catbalogan, he doesn’t earn as much when he sold his characters given the economic situation in the area where he used to live.

(If somebody will help me, give support, maybe I would continue (creating figures) so I can appreciate what I’m doing. But if I just continue to create and have slow income from it, maybe it’s better for me to apply for a construction worker job.)

Since he went viral on Facebook, Elmer has been invited to several conventions to exhibit and sell his work. Currently, toy collector and maker Jerry Santos, owner of Life Size Toys and Collectibles, trains and extends his support to Elmer.

He was also recognized by the Imus City government for his setting an example to save the environment through recycling on Friday, October 20.

Elmer was also given the chance to give one of his action figures to Hollywood actors Mark Ruffalo and Chris Hemsworth. Ruffalo starred as The Hulk in The Avengers while Chris Hemsworth played the character Thor.

Believe it or not, this #Hulk doll is made out of recycled tsinelas (that’s tagalog for flip-flops). Elmer Padilla made this for me so I just wanted to give a nice shoutout. Not only is this inventively creative, but it’s sustainable and just pure awesome! Thank you Elmer! pic.twitter.com/JiA4E91LjZ

It may be pure luck but nonetheless Elmer’s grateful. He still hopes to open his own business.

(Of course, I would love to work on my dreams of creating characters and to have my own shop. That’s why I am grateful to everyone who will help and support my endeavors.)

For him, it’s never too late to master a craft and pursue one’s passion.

“Kung mayroon man kayong nakikitang tulad ng ginagawa ko, pagbutihin niyo lang kung kayo ay may kakayahan, (If you see somebody who has the same skills as I have, do your best in mastering that craft),” he said.– Rappler.com

Want to send financial assistance to Elmer Padilla? You may send it through his bank account: