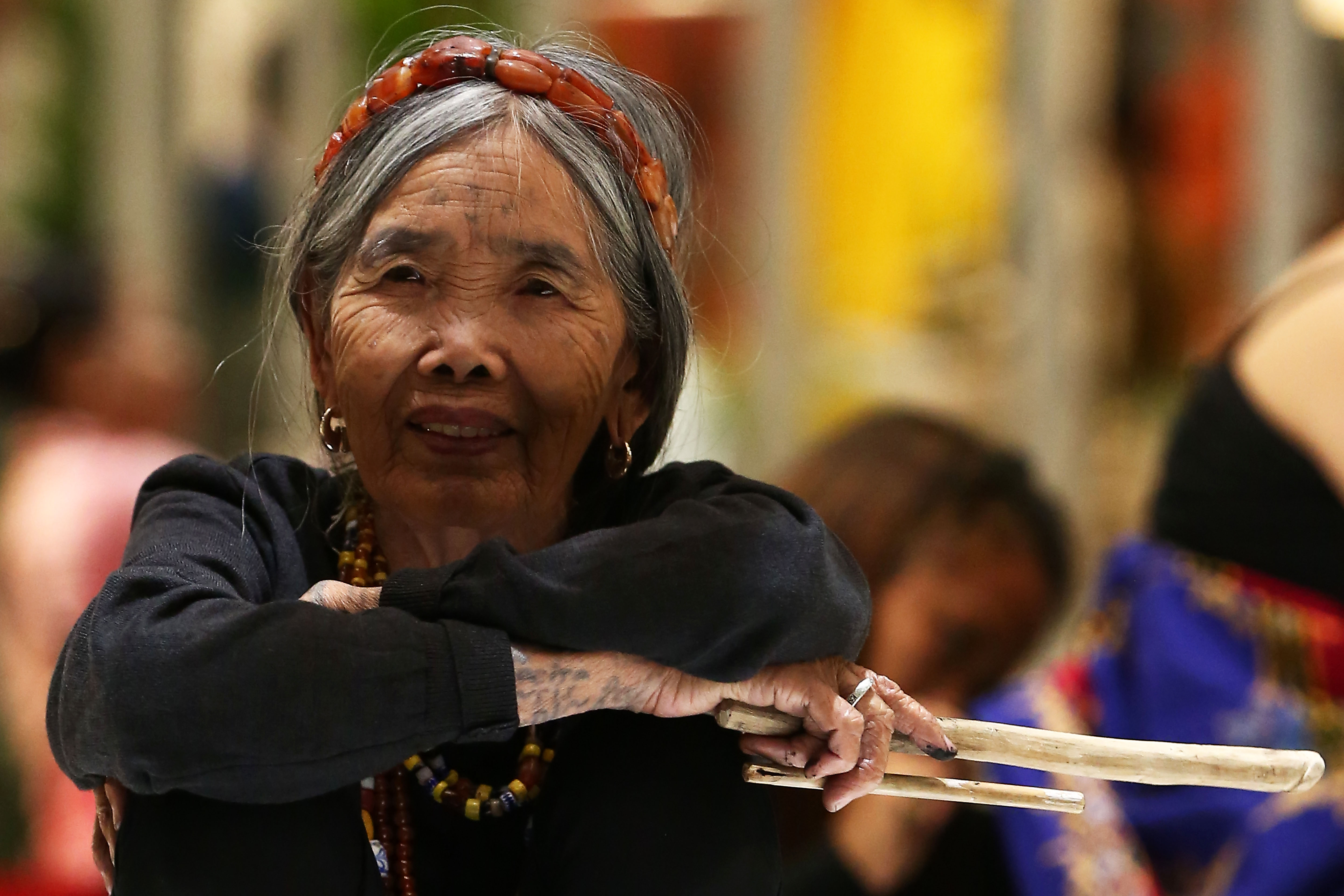 MANILA, Philippines – Organizers of the Manila FAME denied that Filipino tattoo artist Apo Whang-od was “exploited” during the trade fair that ran from October 20 to 22.

Whang-od, a centenarian, and her group did about 300 live tattoo sessions for the first two days of the fair, prompting netizens to call out the organizers for “exploitation.” (READ: VIRAL: Was Whang-od exploited at Manila FAME?)

The organizers called on the public “not to put malice” for inviting Whang-od at the trade fair.

Clayton Tugonon, executive director of Department of Trade and Industry’s (DTI) Center for International Trade Expositions and Missions (CITEM), said the Kalinga tattoo artist was flown to Manila to nominate her for the “Gawad sa Manlilikha ng Bayan (GAMABA)” or the National Living Treasures Award.

“The art has never been changed. She’s an institution about arts – (symbolizing) the pure talent of Filipinos,” Tugonon said, praising the artist.

“The dream was for her to be awarded. It’s our plan to work until she gets the award. She deserves it,” Tugonon saying the agency had to go through the process of acquiring several permits just to be able to bring her to Manila.

Responding to the issue of “exploitation,” Tugonon said that it was not their intention to “exploit” Whang-od but to showcase her craft. DTI-CITEM did not get a cent from the artist’s earnings during the fair. 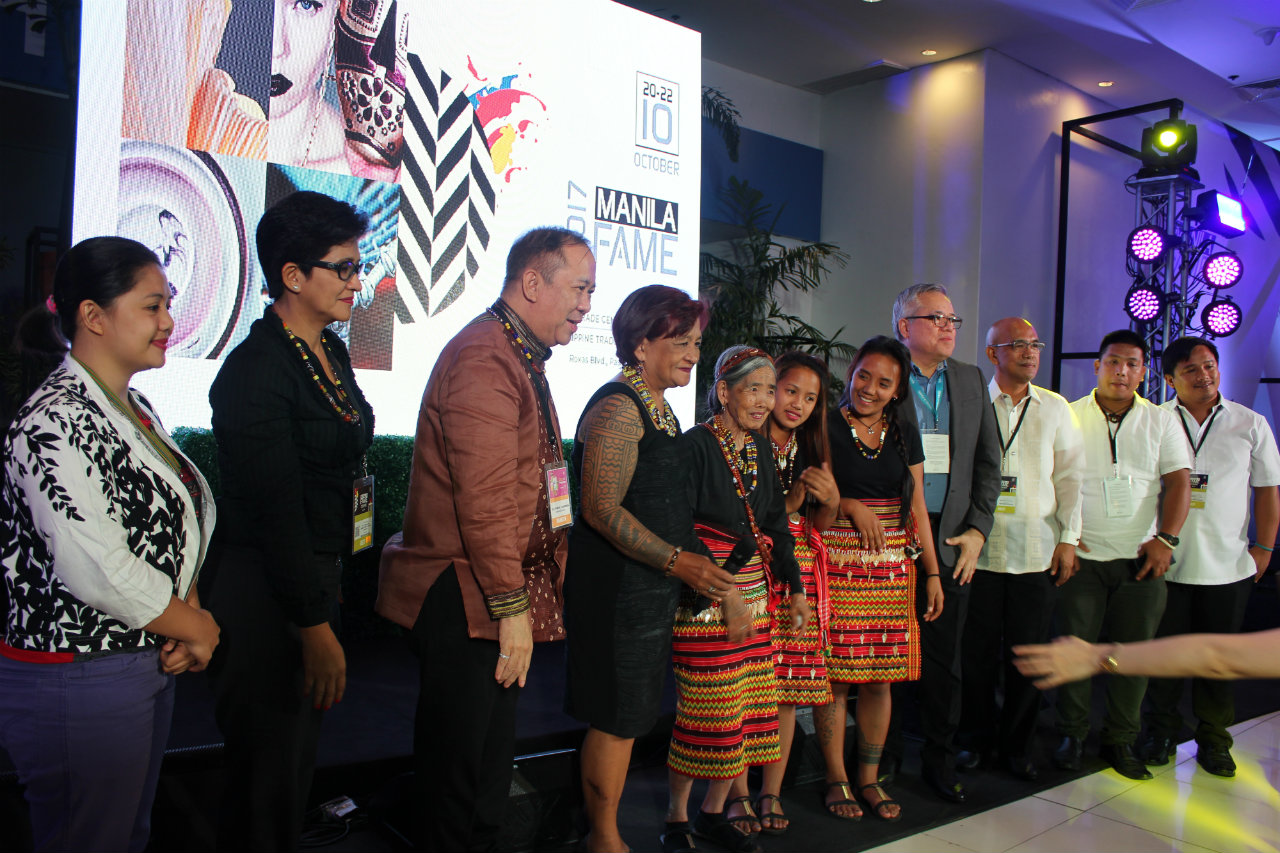 “I hope the people change their notion about her being here. We just want to promote her,” Tugonon said.

In 2015, a campaign calling for the recognition of Whang-od as National Artist went viral. Indigenous art forms, however, are under the National Living Treasures Award.

Whang-od’s nomination for the GAMABA Award was officially accepted by the National Commission for Culture and the Arts (NCCA) on Saturday night, October 21.

If she was brought here for the GAMABA awards, then why was she at the trade fair inking tattoo on people’s skins?

Nerza del Rosario, part of the organizers of Manila FAME, said that doing tattoos was one of Whang-od’s requests during their initial talks.

Under the contract signed by Whang-od’s niece, Grace Palicas, on behalf of her, it was clearly stipulated on the agreement that the centenarian should conduct “at least 5 live tattoo sessions for the event opening until the second day of the show.”

The contract also states that all proceeds from tattooing or sale of Blacksmith products “shall be received in whole” by Whang-od and her companions.

Whang-od took home about P800,000 from all her earnings during the fair, apart from the honararium she received from the organizers.

Netizens complained about putting the centenarian to work, inking 300 tattoos in two days is too much, they said. (READ: Whang-od at Manila FAME: Marginal notes on a damaged culture)

The organizers said it was Whang-od who insisted to do more tattoos. She was even late to the gala night on Saturday where her GAMABA Award nomination was to be endorsed because she was doing tattoos, Del Rosario explained.

In a text message sent to Manila FAME, Palicas said their group was honored to be invited to the trade fair.

(We are happy to be invited at the Manila FAME; we’re proud. We’re not very showy when it comes to expressing our feelings. When we talk, she said she wants to come. Lola said she wants to see Manila. I told her, if you want, let’s go, so we can experience other cultures.)

Eva Oggay, another relative of Whang-od, posted on the 18,000-member Facebook group “Tattooed by Apo Whang-od” that they are “very happy to come to Manila,” despite the growing debate on her “exploitation” within the FB group. (READ: British backpacker’s PH adventure: Tattooed by Whang-od, the living legend)

“I just want to tell you guys that the group from Buscalan are very happy coming here to Manila. And Apo Whang-od Oggay is very well… happy to meet the people in Manila that appreciate her tattoo design. That she came to meet [actor] Coco Martin and the relatives from Kalinga [who live] in Manila,” she wrote on a Facebook post.