Facebook Twitter Copy URL
Copied
'Donald Trump has just set foot in a country where people have been seriously affected by extreme weather made worse by climate change', the environmental group says

One of the graffiti messages was “Stop trumping the people and the planet.” Another read “Climate change is real.”

The Greenpeace Clean Squad sprayed the pavements along the Cultural Center of the Philippines (CCP), the US Embassy, Bangko Sentral ng Pilipinas, Roxas Boulevard, and Welcome Rotonda. (READ: Pinoy climate champions on global warming: ‘We can win this fight’)

“Donald Trump has just set foot in a country where people have been seriously affected by extreme weather made worse by climate change,” Greenpeace Philippines campaigner Vince Cinches said.

“Every Filipino he’ll meet has felt its harsh impacts one way or another, and so all of us are a testament to the reality of climate change, which Trump continuously and willfully denies,” he added. 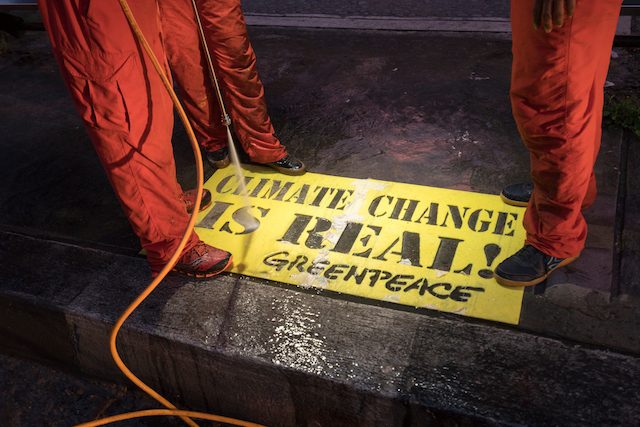 In June 2017, Trump announced the withrdawal of the United States, the world’s second biggest carbon emitter in the world, from the Paris climate accord. He said that the agreement signed by almost all countries imposed unfair environment standards on United States.  (READ: Trump pulls U.S. out of global climate change accord)

Trump’s decision to pull out from the Paris climate agreement gained global backlash from different individuals and organizations who are gathering efforts to minimize the effects of climate change and slow down global warming. (READ: Trump pulls U.S. out of global climate change accord) The American leader is fresh off his trip to Vietnam, where he attended the Asia-Pacific Economic Cooperation (APEC) summit. Trump’s Philippine stop caps off his 12-day, 5-nation Asia tour, that has also seen him visit Japan, China, and South Korea. – Rappler.com