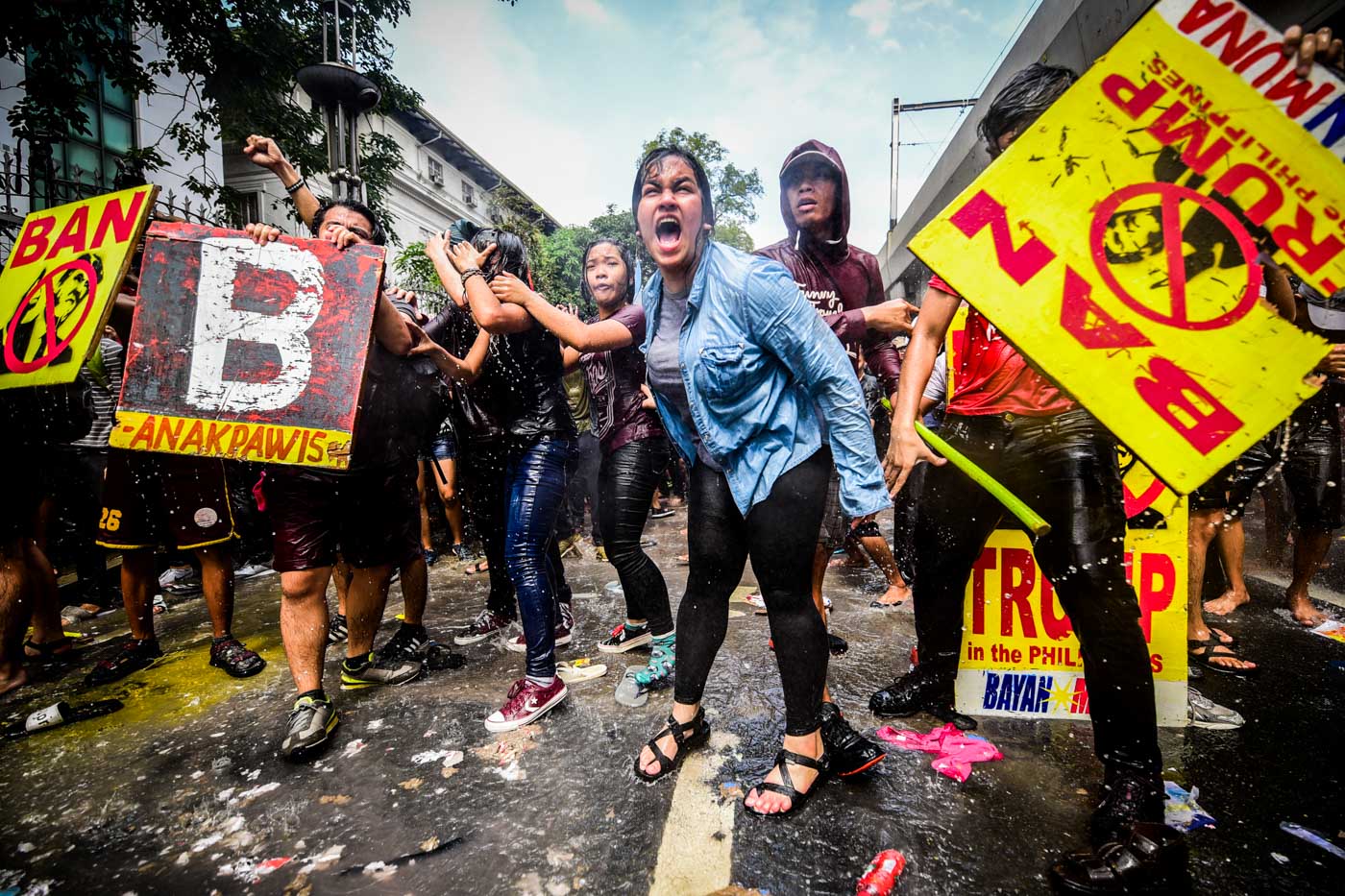 MANILA, Philippines – For 6 days, from November 9 to November 14, thousands took to the streets of Metro Manila to protest against the Association of Southeast Asian Nations (ASEAN) Summit and Related Meetings hosted by the Philippines.

Violence marked the wave of protest actions as riot police struggled to keep the mobilizations under control.

The groups protested a wide range of issues including extrajudicial killings and violations of human rights linked to the Duterte administration’s war on drugs, the government’s “extravagant hosting” of the Summit, the visit of US President Donald Trump to the country, and the countries’ use of fossil fuels, among other issues.

Riot police used water cannons, truncheons, and ear-piercing sonic alarm against protesters. These led to violent standoffs that resulted in hundreds injured from both police and protesters. 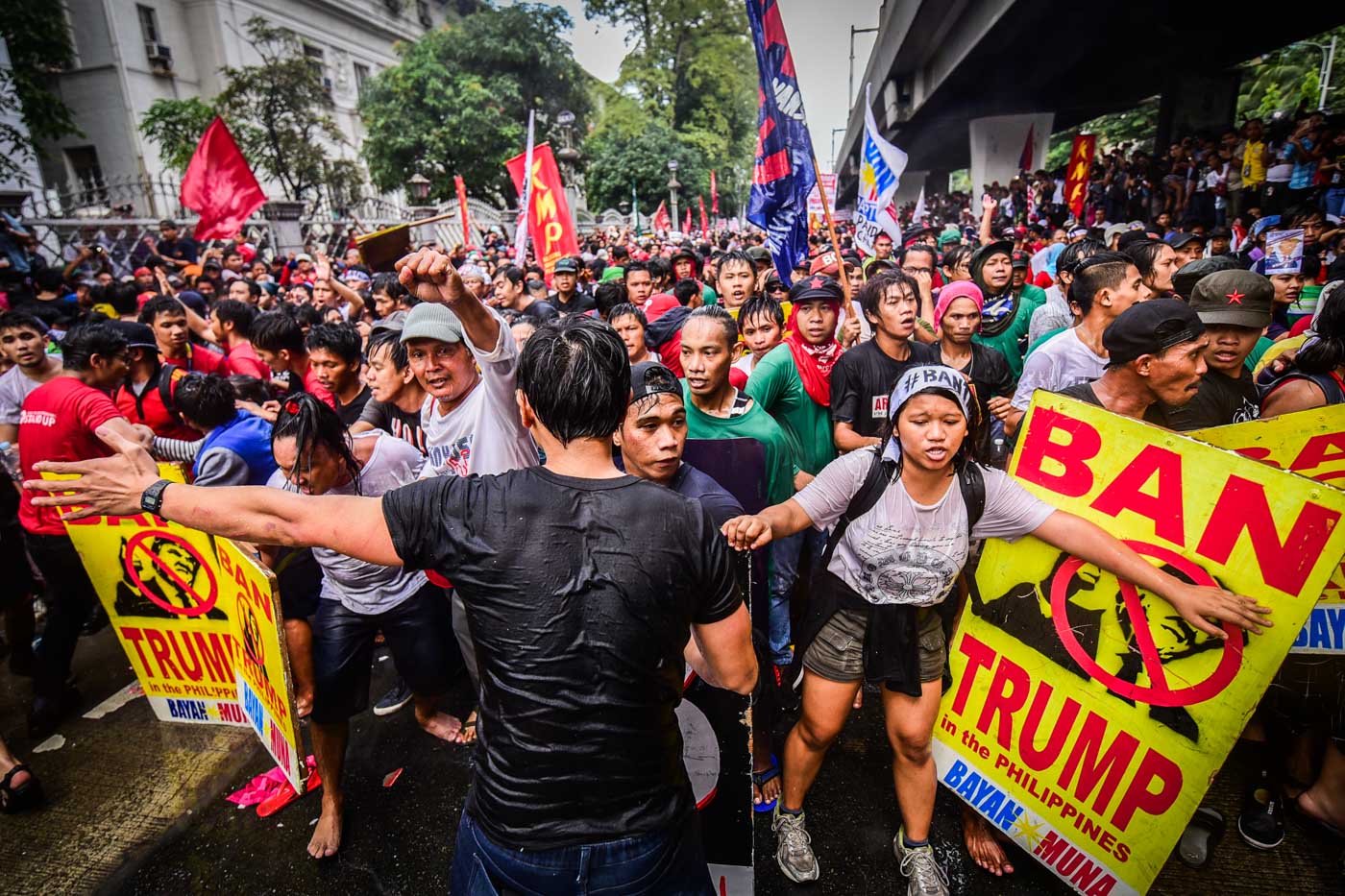 The most tense scuffle that ensued between police and protesters happened along Taft Avenue on Monday, November 13, as the ASEAN Summit officially opened a few kilometers away at the Philippine International Convention Center (PICC).

Police who responded to this demonstration were outnumbered as at least a thousand protesters attended the rally. (IN PHOTOS: At least 2,000 attend protests on day one of ASEAN Summit)

At total of 123 activists were injured according to the Health Alliance for Democracy after the outnumbered cops used water cannons and truncheons against those who attempted to break the police barricade set up along the corner of Padre Faura Street and Taft Avenue.

Around 20 other protesters and 20 cops were also injured earlier on Sunday, November 12, at Plaza Salamanca, a square near the US embassy, after demonstrators attempted to go nearer a zone marked off-limits to demonstrators.

Police arrested a protester “in the act of throwing stones” at the rally near the US embassy on Sunday.

Protesters, however, told a different story.

According to Cristina Palabay, secretary general of Karapatan, Legaspi was driving the van owned by Karapatan for paralegal assistance during rallies when he was supposedly accosed by the police. 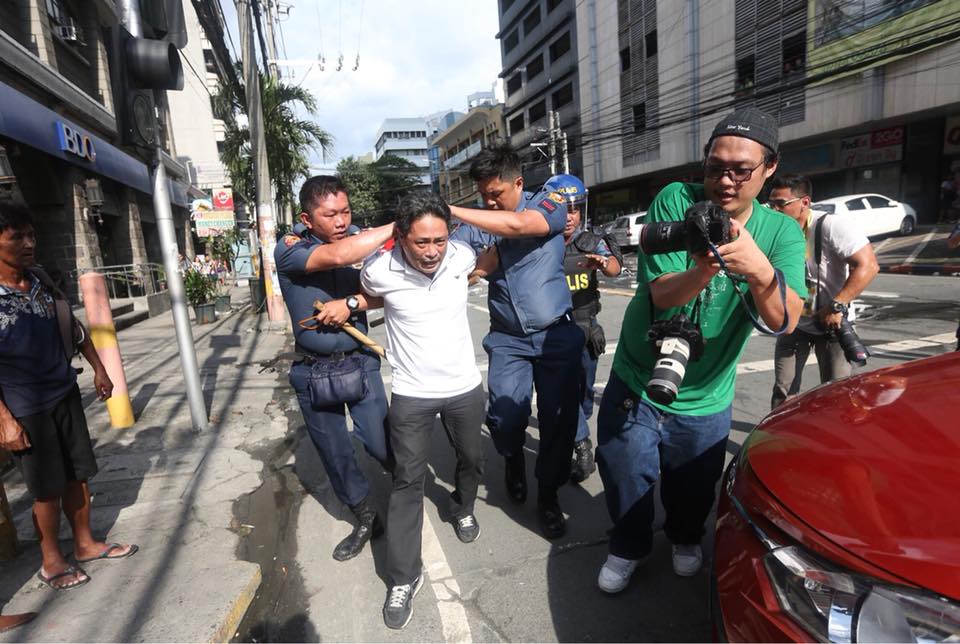 Palabay said that Legaspi was forced out of the van, his hands handcuffed by two policemen – dentified by Karaptan as a certain PO1 Agcamanan and PO2 Bigcas of the Regional Public Safety Battalion, under the leadership of Task Force ASEAN.

The police complaint claimed that Casiño, Reyes, and Legaspi violated the Public Assembly Act of 1985 by committing breach of peace, assault, and disobedience and resistance to authorities.

Palabay downplayed these as nothing but “trumped up charges.”

“We are in fact mulling countercharges of carnapping and illegal search and seizure against CIDG operatives O. Silla, E. Ocampo, R. Siochi, J. Florendo, and Padua and TF ASEAN officials regarding this,” Palabay said in a statement.

On Tuesday, November 14, Legaspi was released by the police, with the charges against him referred for further preliminary investigation. 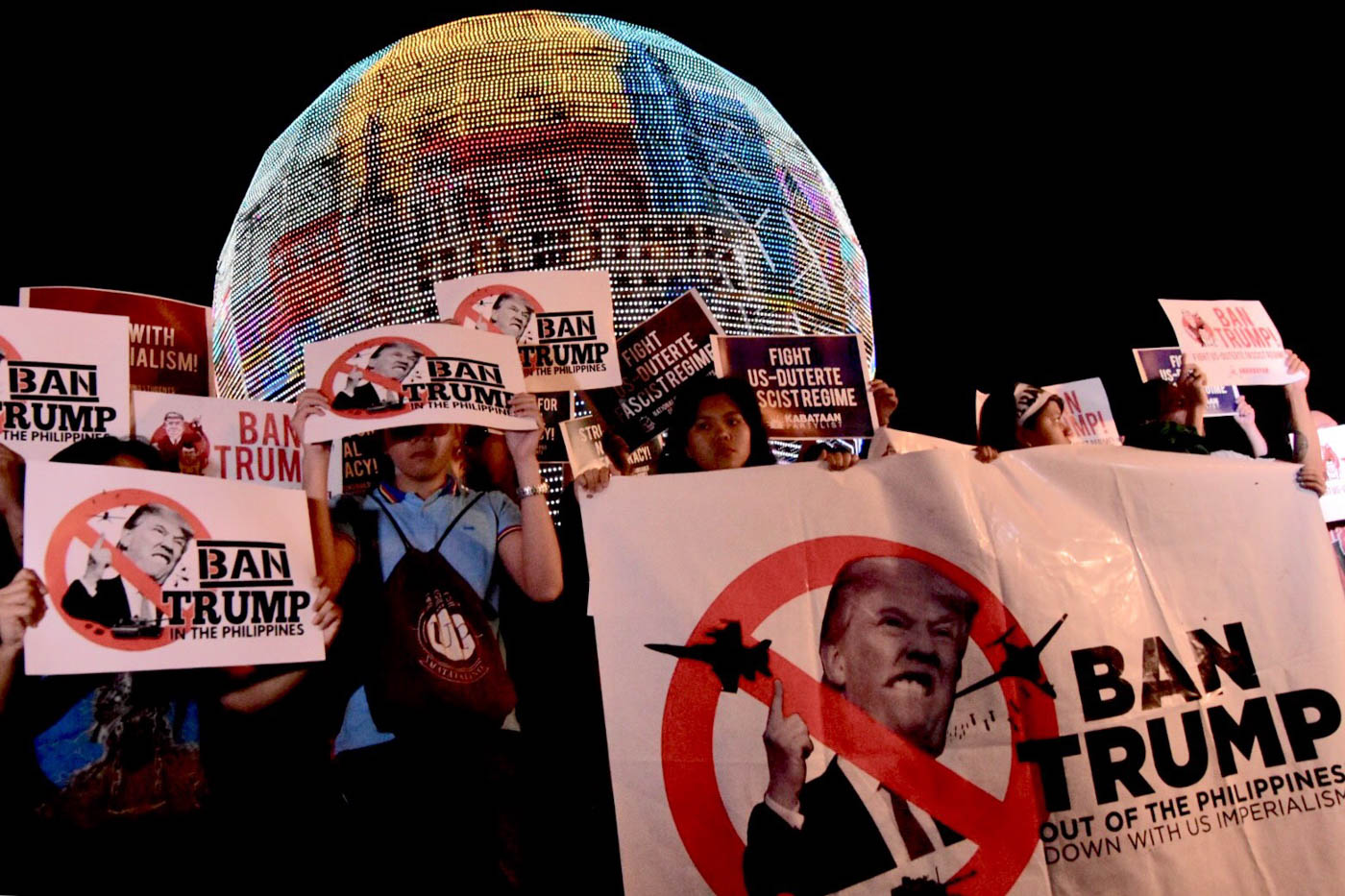 There was no shortage of protest gimmicks in the 6 days that activist groups claimed the streets to show their frustrations and dismay at the country’s leaders who were meeting for the ASEAN Summit. (READ: Small group of ASEAN protesters reach PICC gate) 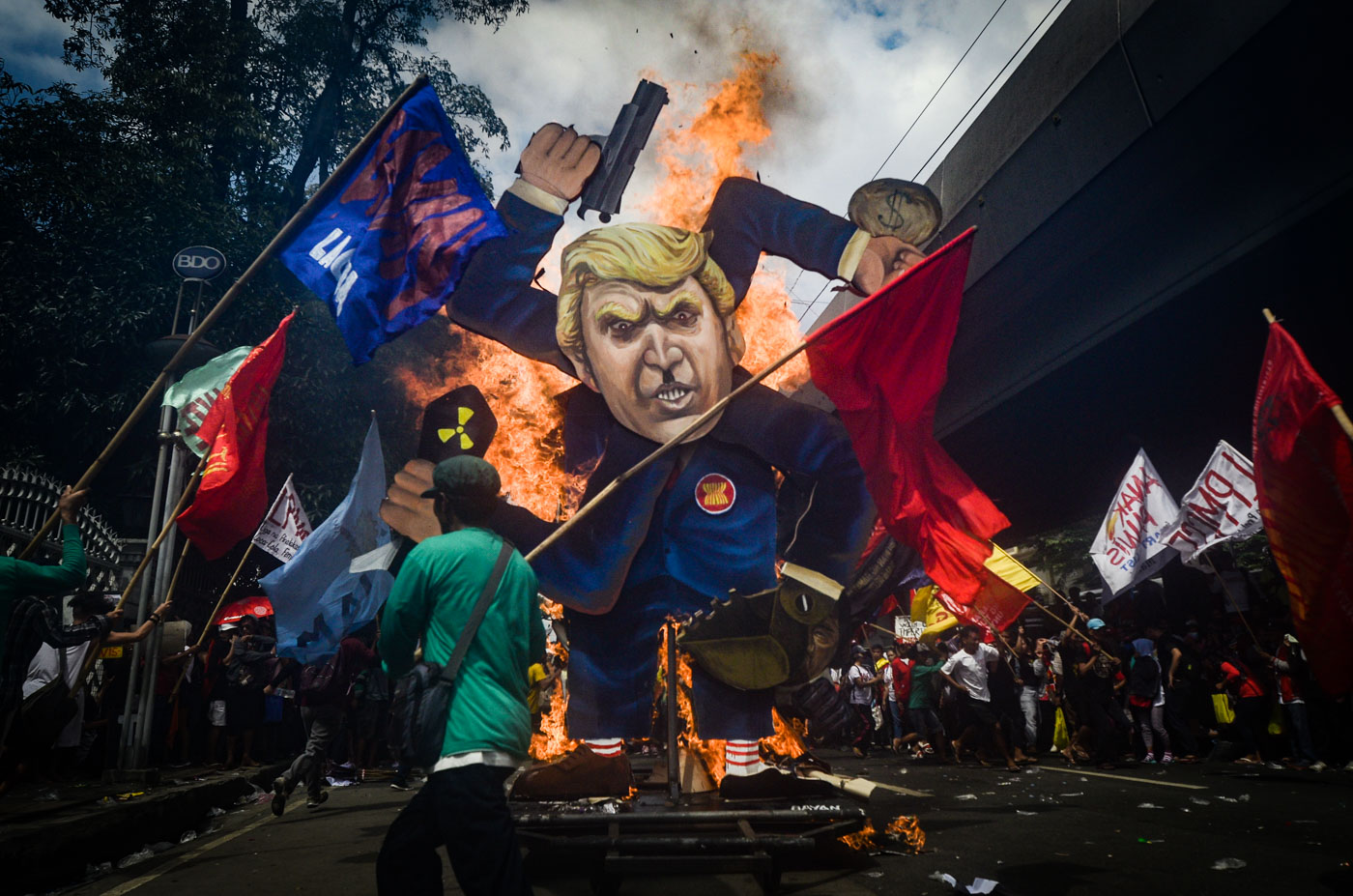 On the night country leaders were having an elaborate 4-course dinner at the ASEAN gala, urban poor group Kadamay organized a boodle fight among homeless Filipinos in Mendiola to juxtapose the “ruling elite’s dinner [with] that of ordinary poor Filipinos.”

Bayan also unveiled the “Fascist Spinner,” a 13-foot effigy of Trump that featured 4 rotating hands shaped into the swastika symbol. “In his own country, Trump has been described as fascist and has been blamed for the rise of neo-Nazi groups,” Bayan said in a statement.

On the last day of their protest, militant groups burned a modified US flag at Mendiola as they condemned the bilateral meeting between Trump and Duterte which they described as “a sell-out of Filipinos.”

At least 60,000 security personnel were deployed during the ASEAN Sumit. The Crowd Disturbance Management (CDM) team, tasked to deal with the protest rallies,was part of the ASEAN security team.

Below are some photos taken on the last day of protests for the ASEAN Summit: 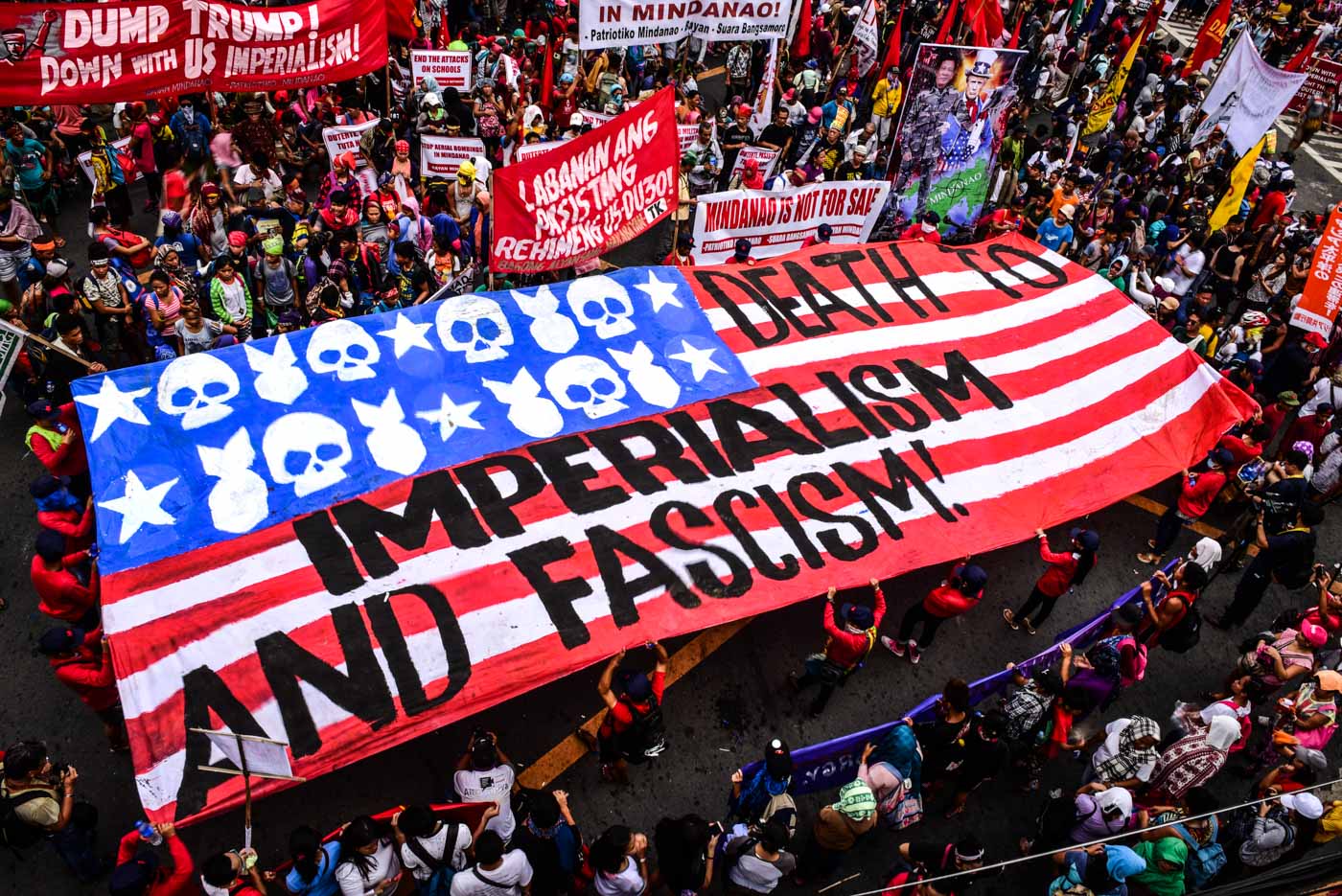 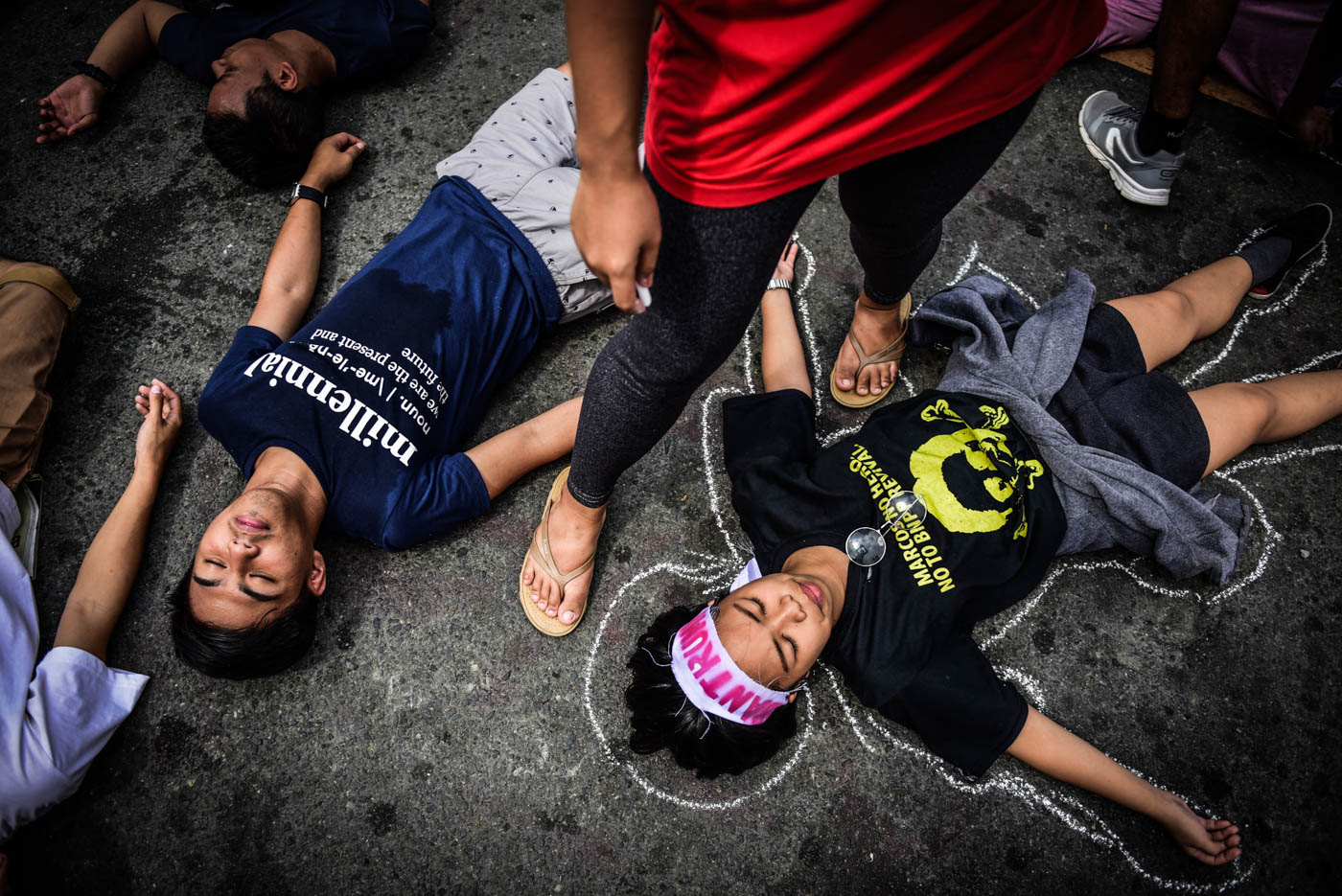 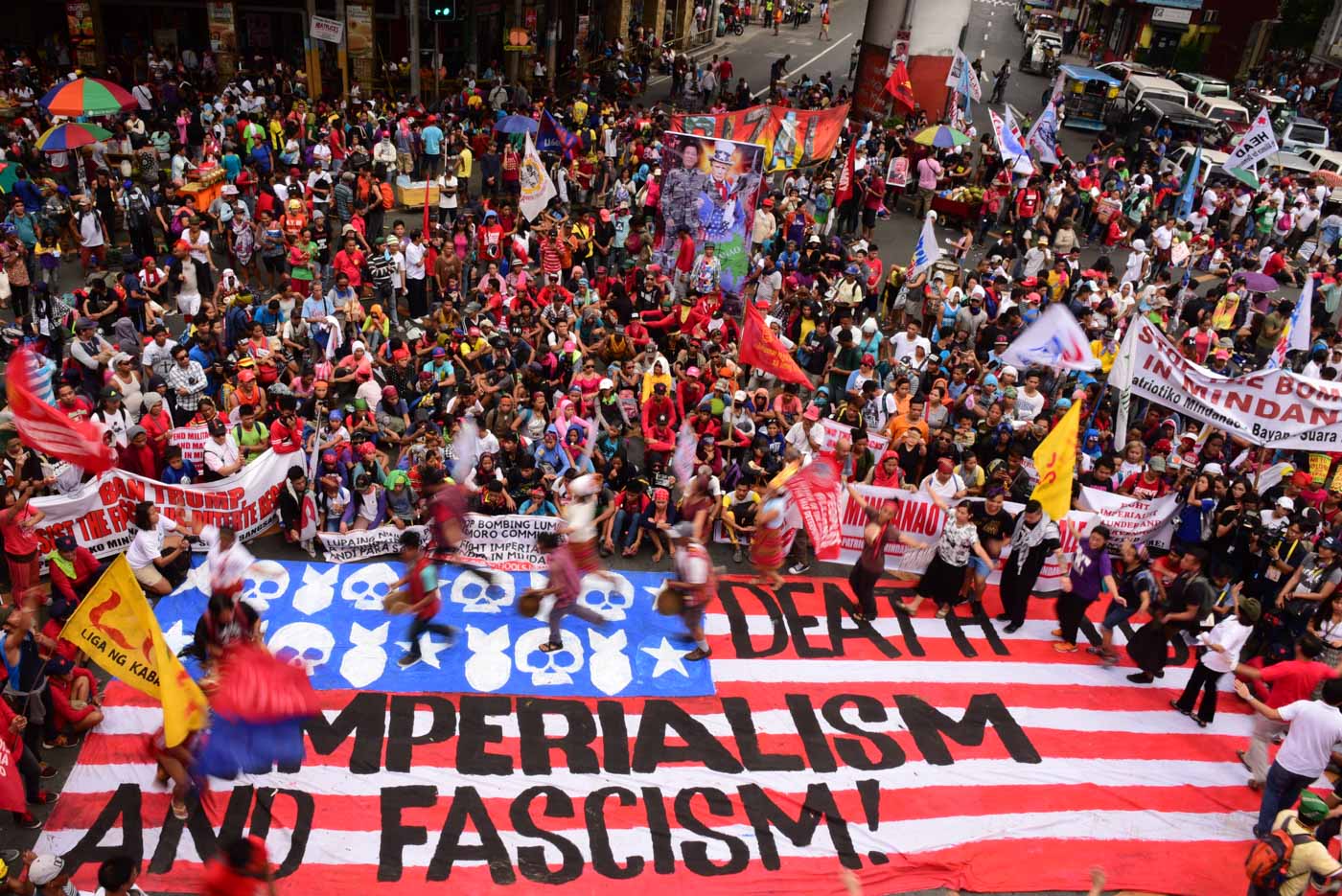 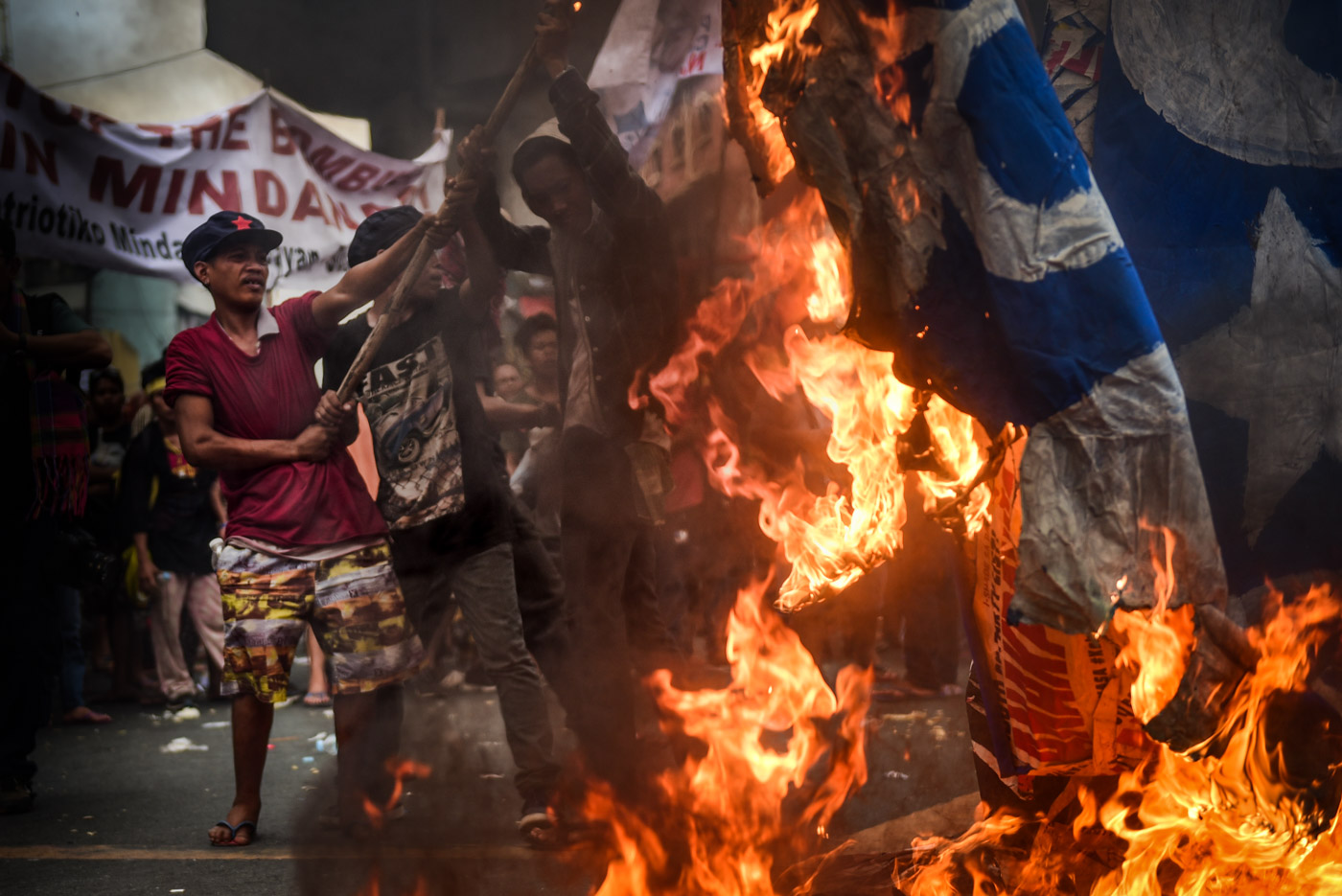