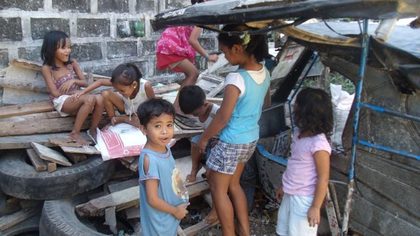 MANILA, Philippines – Fatima, 9, and cousin Enden Joy, 8, are among the informal settlers who live a few steps away from nearby Ilugin Elementary School in Barangay Pinagbuhatan, Pasig City.

Living near a school doesn’t work to their advantage, however, as their poor living conditions require them to work instead at their grandma’s small store just outside the school. Their grandmother, Carmen Birol, is also the village leader.

Fatima said some of her friends in the neighborhood don’t get to attend school, however, because of poverty.

The city government has been providing free tuition and school supplies to public elementary and high school students. The problem, according to Carmen, is that most children in their area don’t have birth certificates yet — a common entry requirement of schools.

Because of poverty too, parents can’t afford to register the births of their children. On average, this would cost P315, more than half the minimum daily wage in the National Capital Region (P426).

Deprived children in cities of extremes

But the girls say they are still luckier. They may not be attending school, but they fortunately live farther away from the swine slaughterhouse and the filthy floodway near some of their friends’ homes.

“Mas kawawa sila dun,” the girls claimed. They recalled that as water rose from the floodway during the onslaught of tropical typhoon Ondoy in 2009, the families of their friends had to relocate to the nearby school.

Fatima, Enden Joy, and their friends belong to the estimated 1.7 million children living in informal settlements in Metro Manila. The figure shows that while urban life has been associated with development and economic growth, millions of children in cities grow up deprived of some basic services.

The study, The State of World’s Children 2012, launched on February 28 by the United Nations Children’s Fund (Unicef), examined the conditions that shape the lives of children in urban areas.

It described cities as centers of extremes: they offer the advantages of urban schools, clinics, and playgrounds, yet they reflect huge disparities in health, education and opportunities for the youth.

“An increasing number of children living in slums and shantytowns are among the most disadvantaged and vulnerable in the world, deprived of the most basic services and denied the right to thrive,” Unicef executive director Anthony Lake explained.

The data presented in the study show that children’s rights are not realized equally around the world:

Migration, economic shocks, urban violence, and disaster risks are seen as factors that challenge the living conditions of children in urban areas.

This is no different for the Philippines, now a growing urban society with half of the country’s population living in the cities.

The report explains that Filipino children who live in the poorest urban communities experience multiple deprivations. “They lack decent housing, are exposed to dangers from disasters, have limited access to clean water, and are more prone to neglect, abuse and exploitation,” says Abdul Alim, Unicef deputy representative.

The United Nations Department of Economic and Social Affairs (UNDESA) claims that 24% of children aged 0-14 years old live under the national poverty line. Children in urban settings experience severe deprivation of shelter (1.43%), portable water (8.33%), and toilet facilities (6.15%), among others. These statistics have caused the country to be chosen as part of the Safe and Friendly Cities for All global initiative — a 5-year joint project of Unicef, UN Women, UN Habitat, and other partners — that starts this year. An estimated budget of US$26-M will be spent on a program that will cover 8-10 cities around the world, including Metro Manila.

Pasig City, where Fatima and Enden Joy live, has an urban poor population of more than 65%. Unicef urges governments to include children’s welfare in their program planning and implementation.

“To start, more focused, accurate data are needed to help identify disparities among children in urban areas and how to bridge them. The shortage of such data is evidence of the neglect of these issues,” a statement from the organization says.

Alim, for his part, also calls on the government to focus on disadvantaged children, saying that leaders should be reminded of the UN’s Narrowing the Gap study recommendations in 2010. The study, which discussed approaches to child survival and development in meeting the UN’s Millennium Development Goals (MDG), suggests refocusing each country’s resources and investments on alleviating the barriers in promoting children’s welfare.

Alim states that these resources may affect the current trend in conditions of deprived urban children. “If the pattern of investment is changed, the MDG will be achieved,” he said. – Rappler.com