MANILA, Philippines (UPDATED) – What does the decision of the  Securities and Exchange Commission (SEC) to revoke Rappler’s license to operate mean to campus journalists, school publications and student organizations?

Their united stand: We should all help defend press freedom.

According to school publications and student journalism groups, press freedom is a pillar of democracy. Thus, fighting for press freedom should be everyone’s battle. (READ: ‘Rappler now, who’s next?’ – netizens)

In its statement published on Monday, January 15, the University of the Philippines College of Mass Communication (UP CMC) student council said that shutting down media institutions “is an attack to journalists and all attacks against the press is an attack against democracy.”

This was the same sentiment shared by several school publications like the Visayas State University’s Amaranth, St. Scholastica’s College Tacloban’s Sulog/Binhi and Ateneo de Manila University’s The Guidon.  They all said that this was not Rappler’s battle alone.

“All media organizations – from mainstream media to the student press – must take a stand against this attack on journalism. Bowing down to intimidation will only embolden those in power,” The Guidon said.

School publications also criticized the administration of President Rodrigo Duterte and pointed out its consistent effort to silence all groups that are critical of the government and, at the same time, empower its supporters, regardless if they are purveyors of fake news.

In its statement, The Guidon listed the several cases of intimidation of the media by the Duterte administration, including the threats to block the renewal of ABS-CBN’s franchise and criticisms hurled at  Philippine Daily Inquirer’s (PDI) supposed “slanted” reporting.

For UP CMC student council, these tactics show hints of a dictatorship and are reminiscent of what the Filipino press have experienced under Martial Law.

This is also the reason why they have collectively urged the public to take a stand against this attack on press freedom.

“We call on everyone: the student press and media practitioners who rally their constituents in the pursuit of truth; the student leaders who are determined to represent the voices of their peers; and anyone who has been previously forced to silence,” The Crusader of the Xavier University in Cagayan de Oro said in it statement. 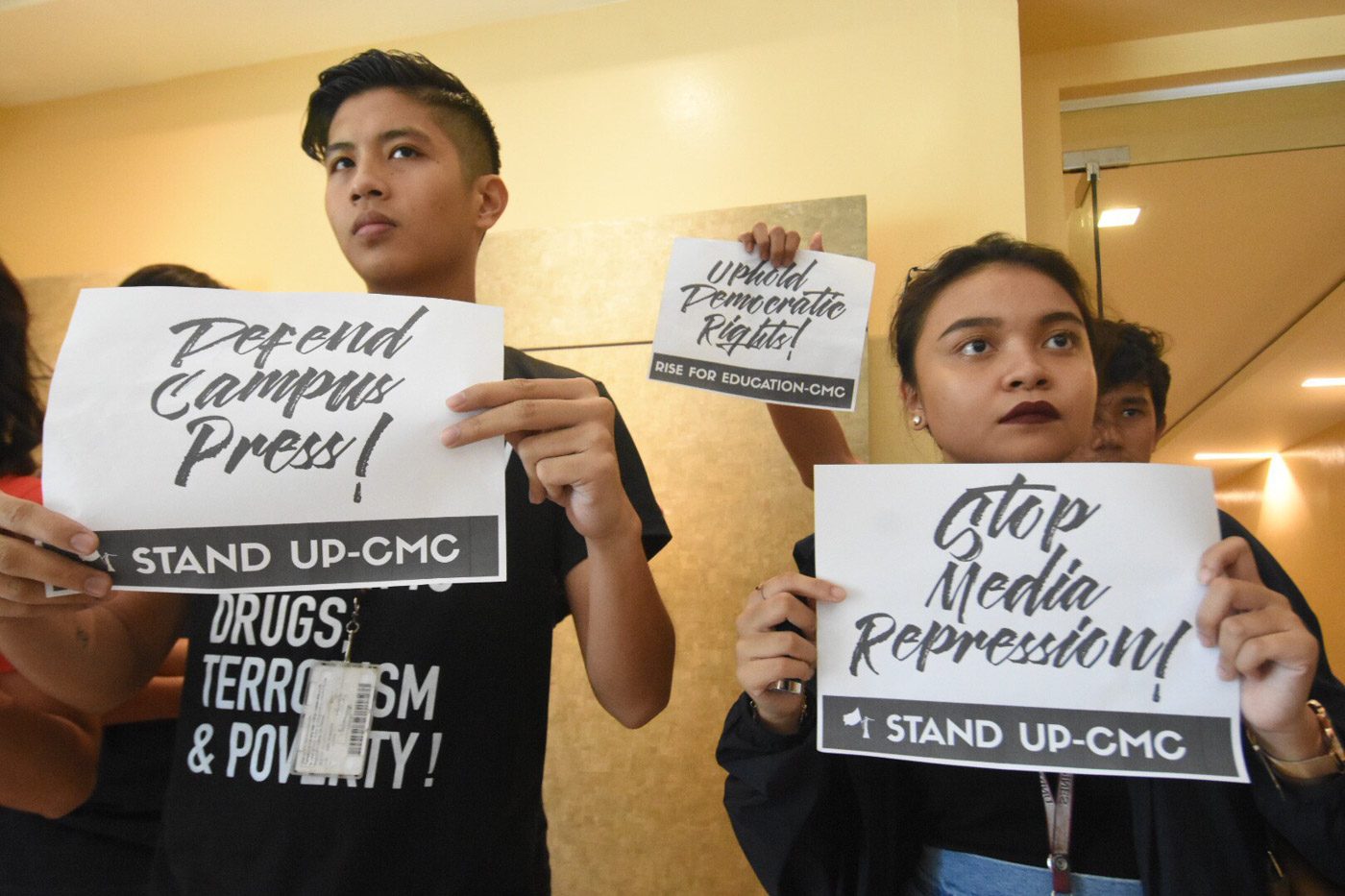 On Tuesday, January 16, the UP CMC student council urged students to join a protest against the attack on press freedom at the University of the Philippines Diliman from 10 am to 12 pm.

Below are some of the statements of support released by school publications and student journalism groups:

In its order, SEC zeroed in on a clause in the company’s Philippine Depositary Receipts (PDR) from Omidyar Network, saying that it violated constitutional restrictions on ownership and control of mass media entities.

Rappler has long debunked this allegation, explaining that the PDR, while a financial instrument, does not translate to investors’ control in the day-to-day operations of the company.  – Rappler.com